What's on your mind?

I showed my mom something from that one yt vid 'Creepy facts with Haikyu gc' It's good, watch it if u haven't and all that other $h!+. But my mom was like, why don't you watch some Jesus, and I looked up asajesus to show her. And she was like, 'what is this?' I was like, 'what is what?' 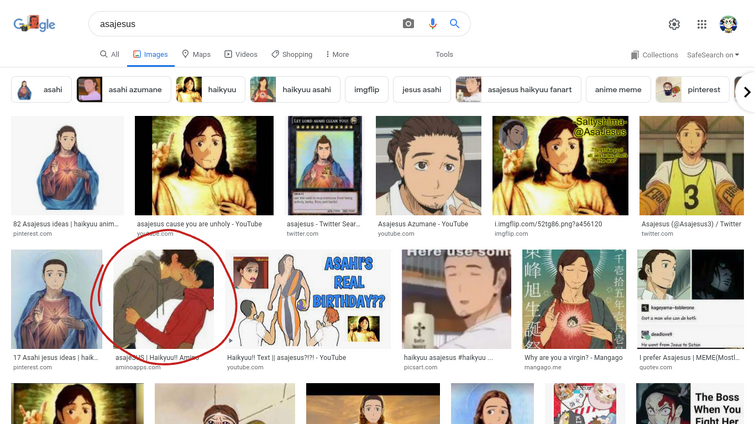 Happy birthday to the third-year, wing spiker of Aobajohsai. 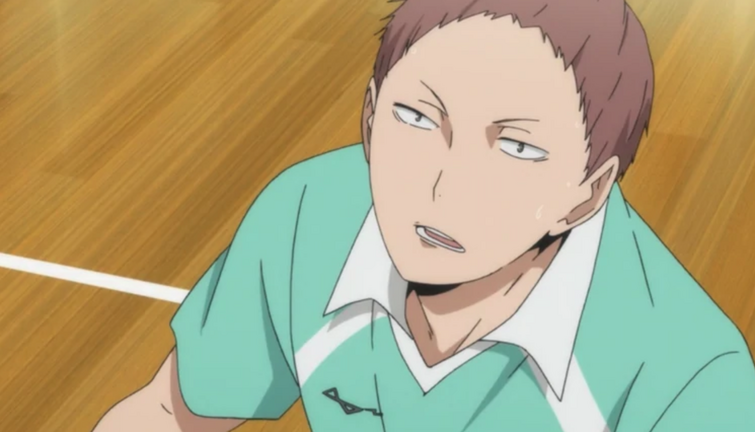 No im not talking about the 'mainstream' setters. they're always talked about...

I mean underrated underrated, like, a lot of people dont make edits for them or even recognize them as skilled players.

So I'm watching a whole Sports anime react vid cuz Im a simp who needs drama. And then, if I look for drama, don't I get it? 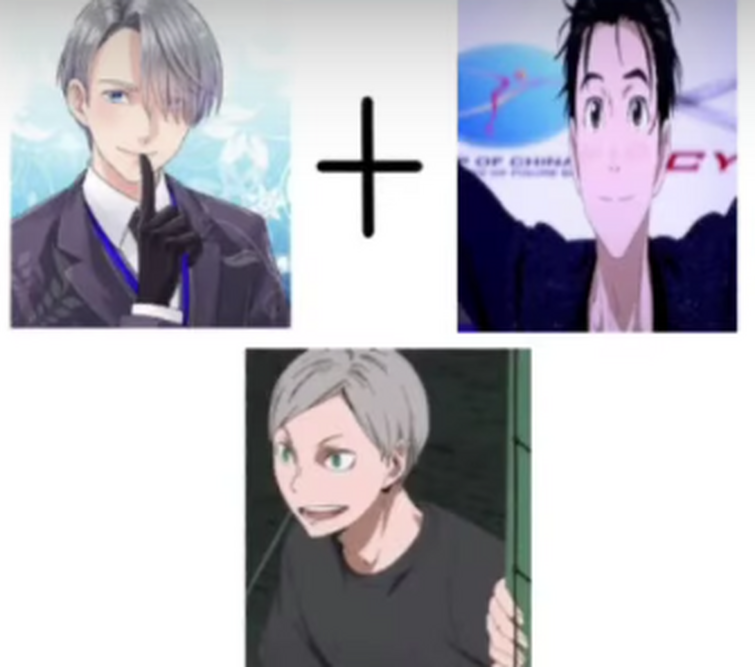 Here's how Haikyuu and Yuri on Ice looked: 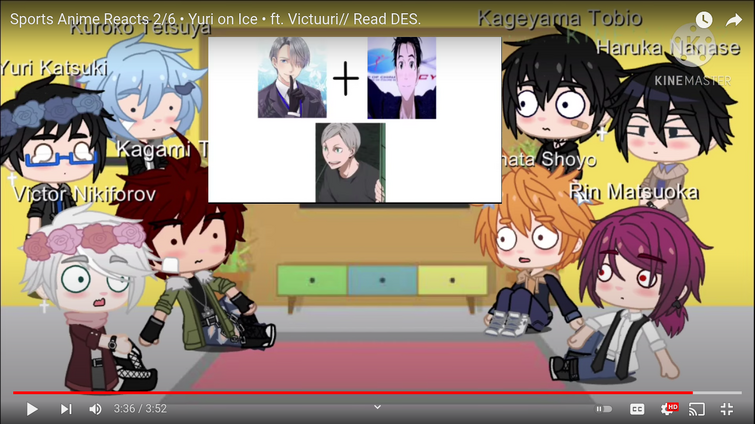 Man, fvck my life. All I wanted was a normal friggin day and this is what I get? Really? 🥲 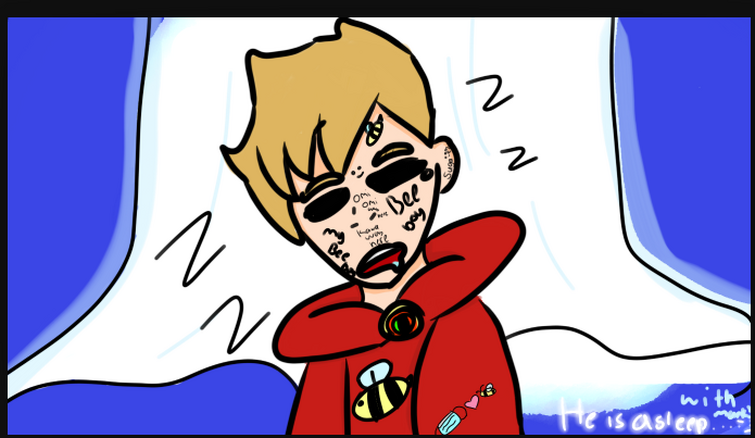 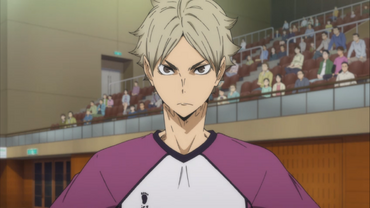 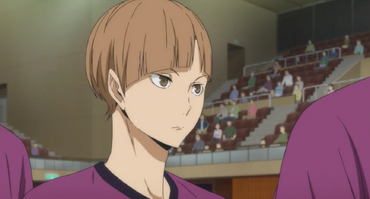 Who is the hot haikyuu boy for me it rin

Kenma: Shoyo, remember to look both right and left before crossing the street!

Hinata: I KNOW! THANKS! BYEE!

Lev: *staring at him*

Lev: WHY CAN'T YOU BE LIKE THAT TO ME TOO-

Happy birthday to the second-year, middle blocker of Inarizaki. 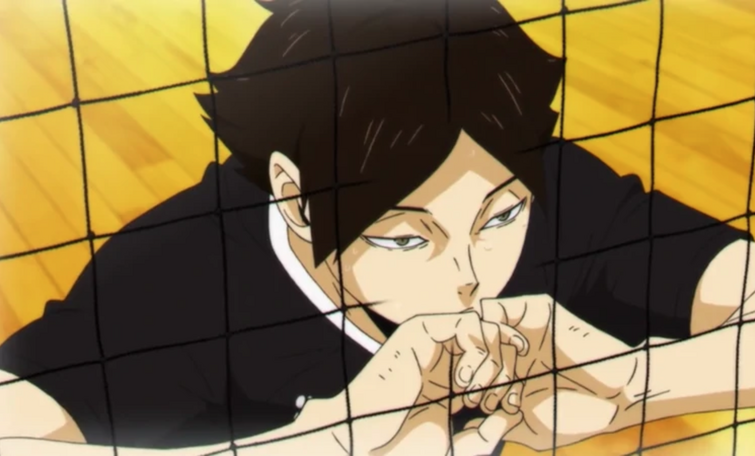 Nobody sleeps. No one. It's actually not because of Atsumu, tho. He goes to bed at normal times, trying to fall asleep before you, and Suna and Osamu get in. Whatever you're thinking, stop thinking it. Those two are loud separately. Sunarin has clearly never heard of ✨headphones✨ and you and Osamu talk, not to each other, but to yourselves, and animatedly too, like you've found someone who was exactly on your wavelength and are making up for all the time you never knew each other existed.

Atsumu, because of you three, spent a week looking for a sleeping pill that wouldn't affect his volleyball performance. In the end, he just got control of all the dorm WiFi and cut you three off every night at eight, which dealt with Sunarin. And he took care of Osamu by scenting the room cinnamon so he fell into bed the second he walked in. Then he tried to fix you with nightly staring contests.

The problem is, you're a little more resourceful than the other two, and you and Atsu would go at it for hours, every round blinking simultaneously. Some nights you would win, sometimes him, but neither of you were getting the sleep you needed. So you came to an agreement. You got Atsumu some noise-cancelling headphones, and he interested himself in the stuff you were talking about, so you got closer. You actually matchmade SakuAtsu, and he helped you get with your s/o too, teasing all the way, obviously.

The students called you the Drama Duo, because you were always in on all the school news. They find out at the end of every college scandal that you guys were the reason everything was resolved. It was done like this. You took one side and he took the other, then you heard the stories, switched sides, heard the other side's story, and met up to figure everything out. You got the two sides to meet, sent away everyone who wasn't involved, and laid out the plain, simple truth. The ones in the wrong apologized, and you two were peacekeepers to the whole school. If anything happened, the smallest fight between friends, you two would help out. And you had the whole school's trust, because of everything you helped out with. New students fell in with the agenda of kindness that you two had set, and the school was renowned for its good-natured students long after you two graduated.

Now you, Atsumu, Sakusa, Osamu, and Suna, live in a house together, where y'all live and laugh, and you broke up with your ex. You'd just lost feelings and was going to break up with them when they did it for you, and y'all still hang out anyway. You never cried over it either, not once. You decided you were a lifelong single pringle, and they never let you feel like a 5th wheel, and the five of you were in that house for the rest of your lives, and adopted 10 kids, who y'all took care of together.

To them, you were Mom, Atsu was Mama, Sunarin was Moms, Samu was Dad, and Sakusa was Papa. The five of y'all parented these children, and grandparented theirs, and did a great job at it too. Life was amazing......

Just wanted to let you all know, don't be afraid to ask to be pinged to my edits!

I'm a beginner at editing and I'm always looking for criticism.

This is one of my edits! (One of My favorites) CLICK TO SEE FULL IMAGE!! LULI IS MY WATERMARK! 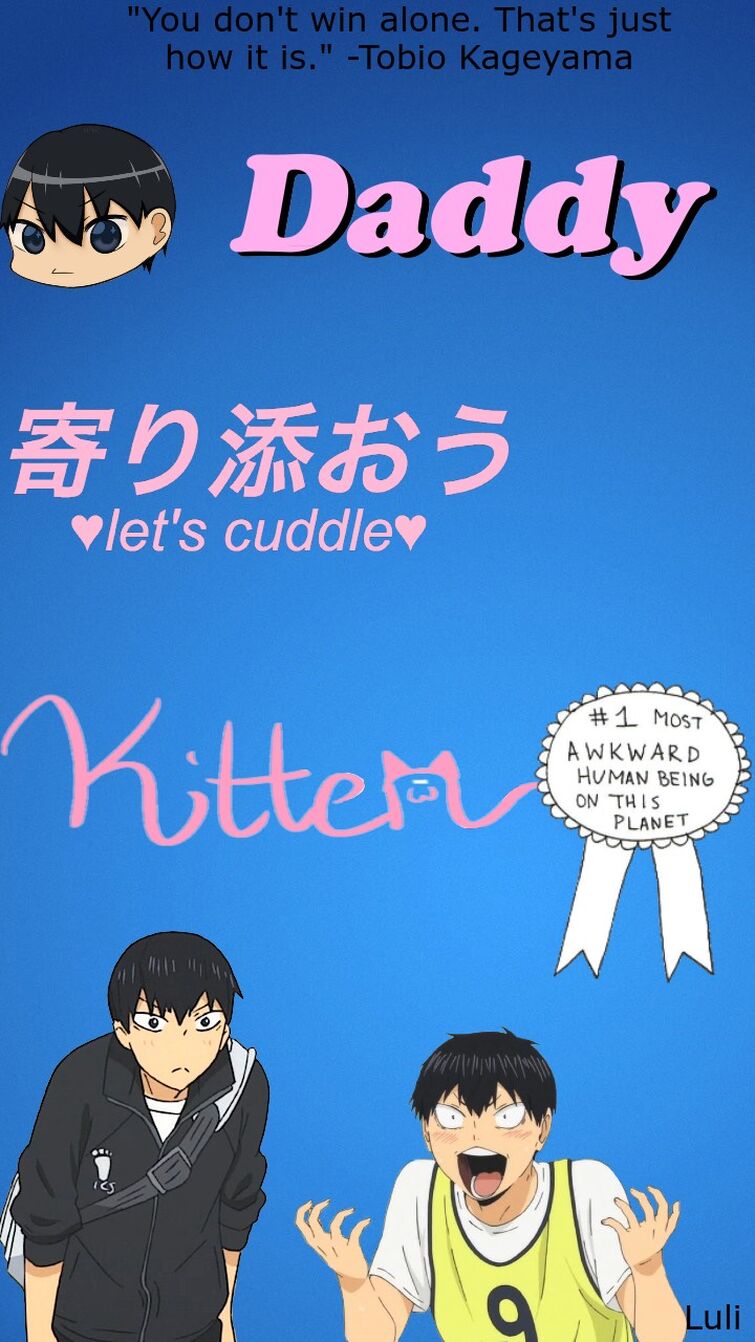 Hello my name is clover/milo i use all pronouns and uhm im sorta new ig? i like haikyuu,demon slayer,tokyo revengers and more! some of my favorite characters from haikyuu are the miya twins, kanoka , yachi , sakusa and suga ^^ 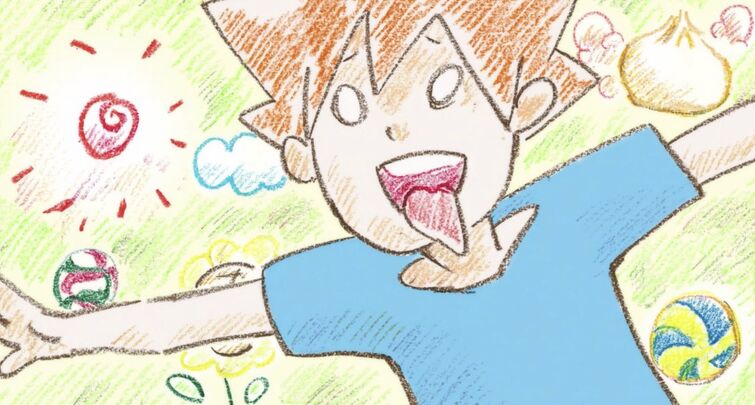 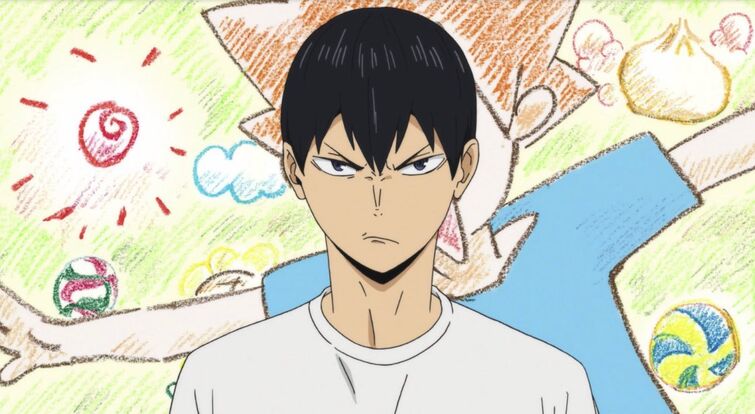 In all seriousness, it's kinda of cute how childish and bright it is

Daisuke's appearance in episode 4 is quite similar to that of a 17-year-old kid named Tobio Kageyama. 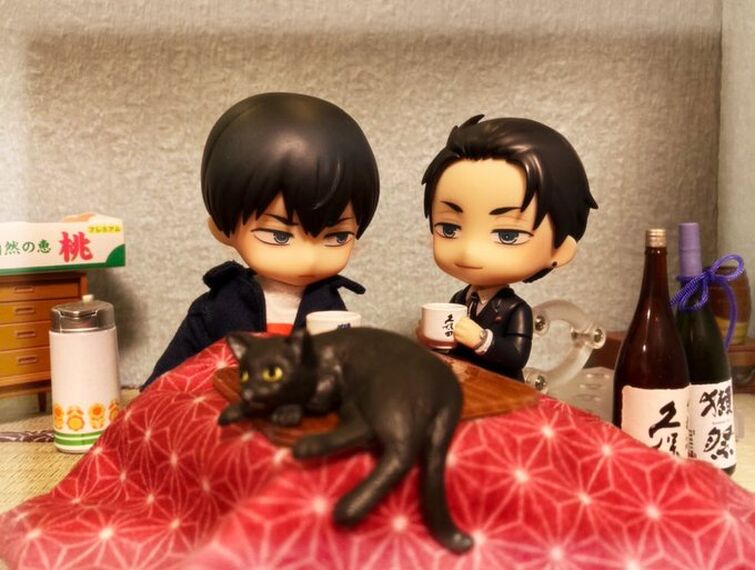 Kuroo: i'm loving it all day

Kenma: i'm McBreaking up with you

Bokuto: hey akaashi do you have two tongues in your mouth?

Bokuto: do you want to?

Bokuto: what? who said that?

Oikawa (to kageyama): dude, how did you tell hinata here that you like him?

Oikawa: *sighs* because i really like iwa-chan but i dunno break how to the news to him. i'm not sure if he feels the same.

Kageyama: *looks back at shocked hinata* yeah, i like you.

Oikawa: *sudden realization* oh. OH NO! I THOUGH . . . because you two are always together. so you haven't confess-

Hinata: *munbles* what the hell is happening? kageyama-kun likes me. am i deserving his love? is that true? i'm not dreaming, am i? 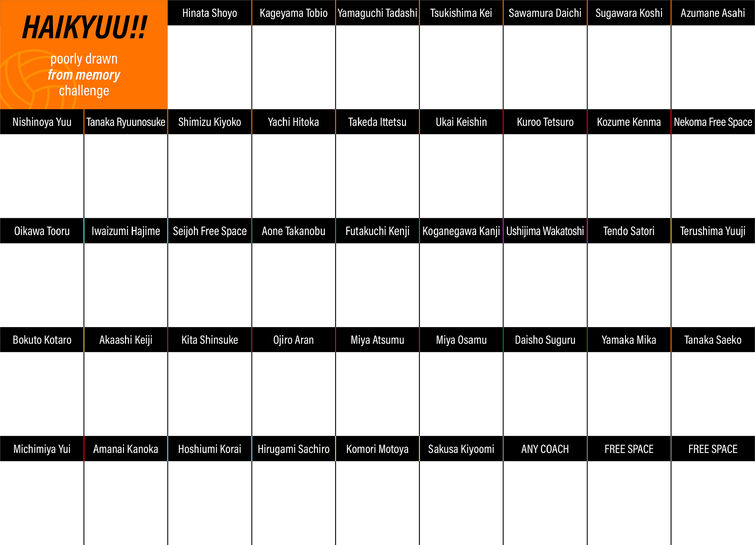 Happy birthday to the libero of Fukurōdani. 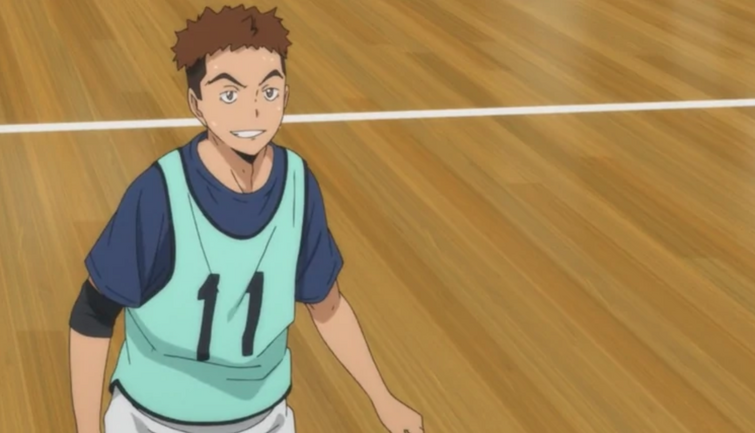