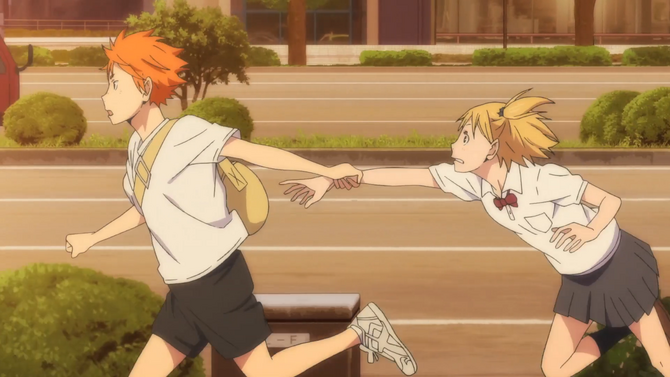 "'Townsperson B'" (Japanese: "B", "Murabito B") is the third episode of Haikyū!! Second Season, based on the manga Haikyū!! by Haruichi Furudate. The episode premiered on October 18, 2015.

Yachi feels conflicted about joining the volleyball team, but after watching their practice match against Ōginishi High, she starts to see the charm of the team and considers accepting the manager's role. However, she is having a difficult time expressing her feelings to her mother, afraid that she might disapprove. Luckily, Hinata helps her overcome it by showing to her that even a small role such as a "Townsperson B" can be great.

As Kiyoko leaves the gym after practice, she spots Yachi standing outside. She offers to walk Yachi home after she changes. As she waits, Yachi overhears Takeda and Ukai speaking of how the team may not have a bus available for the upcoming Tokyo trip, leaving them with the possibility of having to rent a bus which is also a problem as the club is low on funds.

Hinata then runs up to Yachi and asks if she has decided if she will become the new team manager. Before she is able to answer, Tanaka and Nishinoya step forward and tell her that she has no choice but to join the team solely for the reason that Kiyoko is talking to them more now that there is another girl present. Daichi promptly silences them and Sugawara apologizes for the two's behavior. Yachi insists that they didn't mean any harm and is actually glad that she was recruited by Kiyoko; comparing the feeling to being Villager B and now feeling more useful despite all of the new things she would have to learn.

As the group begins to depart, Hinata quickly shows them a text message from Kenma. Nekoma has made it passed the first round of prelims. Tanaka and Nishinoya celebrate this news and declare Nekoma should be prepared for them on the upcoming trip to Tokyo.

At her home, Yachi's mother, Madoka Yachi, informs her daughter that she will be heading to work and will return late. As she leaves, she notices a flyer in Yachi's backpack with the notice of the boys' volleyball team looking for a new manager. Yachi informs Madoka that she had been invited to be a manager for the team. After questioning her daughter of what she knows on volleyball, Madoka tries to encourage her to do her best saying that everyone on the team will and Yachi shouldn't come off as the lazy one. Madoka then departs with her co-worker who promptly questions why she had come off so harshly onto Yachi. Madoka replies that she did not intend to come off harsh and was only trying to encourage her daughter to become a stronger person, stating that if Yachi becomes uncertain over one criticism then she will not be strong enough to face the real world on her own.

While changing in preparation for the practice game, Kiyoko tells Yachi about how she herself was uncertain about what it took to be the manager of the team and how she did not know anything about volleyball. She encourages Yachi that as long as she has just a little bit of curiosity, she may find she has a passion for it.

In the gym, Ukai informs Hinata and Tsukishima that he will be helping the two with their blocks in hopes that they will be able to get to the point of being able to block even Ushijima. Hinata eagerly accepts while Tsukishima holds doubts that either one of them will be able to block someone like Ushijima. When the two are dismissed, Ukai tries to find out from Takeda if the boys will be able to pass their upcoming exams. Takeda is unable to answer as Kiyoko arrives and informs them the visiting team will be arriving shortly.

As Yachi gets chairs ready for the visiting team, she is offered help by Hinata but offers him to continue getting ready. She sees how determined he is and questions why he is putting so much effort into a practice game and studying to pass exams in order to be able to attend the Tokyo trip. Hinata answers that he simply wants to get stronger. Yachi believes that he may have other reasons for wanting to win but Hinata is uncertain by what she means. Hinata questions Kageyama if he has a reason for wanting to win and Yachi sees that they put winning on the same level as needing to eat when hungry.

The Ogi Nishi team arrives and the team quickly lines up to greet them. Shortly after, the teams are warming up and Daichi calls his team to get changed. Much to Yachi's embarrassment, the boys change their jerseys right in front of her. Nishinoya notices Asahi's change in hairstyle and questions the reason behind it. Asahi informs him that he had changed it due to Kiyoko telling him he would lose his hair if he continued to tie it so tightly. Tanaka becomes concerned for the same thing and argues with Yamaguchi and Tsukishima while Hinata and Kageyama prepare themselves for the game. Yachi is amused at their antics and Kiyoko compares them to being scrappy like crows off the court but become entirely different once they begin a game. Yachi notices right away how the boys become completely focused on the game as it begins.

The game starts and Kageyama right away lands a service ace. Yachi becomes entranced by the skills, reflexes and power the team has. Kiyoko warns how if she becomes too focused on that she will miss their 'secret weapon'. Yachi looks up in time to see Hinata and his incredible jump, recalling his words of 'I may not be tall but I can fly'.

After the game, Yachi is speaking with Hinata of how incredible the game was while using the same gibberish he had done with Inuoka.

Hinata questions again if she will become the new manager. Yachi is unsure if she should as she believes the team is already strong and she's simply the unimportant Villager B character who is not familiar with their role. Hinata recalls how he had once played Villager B and been scolded for standing out more than the main character. He is instantly made fun of by Kageyama but Hinata insists that even someone like Villager B is cool and has important roles too. Yachi seems to take Hinata's words to heart and later that night she begins plans for a new team poster.

On Saturday, Hinata and Kageyama are leaving from a study session with Yachi and promise her mother that they will do their best to pass their exams. Hinata and Kageyama soon depart with Hinata excitedly exclaiming he can't wait for them all to go on the Tokyo trip, much to Yachi's horror as she had not mentioned this to her mother yet. As soon as the two are gone, Madoka questions what Hinata meant by the Tokyo trip. Yachi begins to explain but her mother's co-worker arrives and the conversation is cut short despite his insistence that Yachi should continue speaking with her mother.

As they are walking, Hinata admires the notes given to him by Yachi and muses how the team will be like the bigger schools when she joins and becomes the second manager. Kageyama does not seem convinced and points out that it's Yachi's decision whether or not she will join the team. Realizing he forgot his textbook, Hinata hurries back to Yachi's apartment.

After Yachi returns his book, she asks Hinata if he has a moment for her to ask a question. After hearing her thoughts about being unsure of joining the team, Hinata tells her how he has messed up several times; telling her off when he had hit Kageyama with the ball during the Seijoh practice game, thrown upon Tanaka's lap and knocked the vice principal's wig off.

Yachi admits that she does want to join the team and become the new manager but is still feels something is holding her back. Hinata quickly deduces it must be something relating to her mother that's causing Yachi to hold back and that the only way to overcome it is to go speak to Madoka directly.

On the way to the train station, Hinata encourages Yachi to make her own choices and that she should join the team if she wants to. Yachi now sees that, whether she joins the team or not, unless she does start standing up for herself nothing will change and she agrees to speak to her mother.

At the train station, Madoka is being reprimanded by her co-worker of needing to give Yachi time to figure things out on her own. The two are about to head to the train when Yachi and Hinata appear. Yachi proudly announces to her mother that she will be joining the boys' volleyball team as their new manager and how even a Villager B character like herself can become stronger.

Now having her mother's approval, Yachi is praised by Hinata at her new confidence and Hinata happily states that Karasuno is in the big league's now that they have a second manager. Yachi then asks Hinata if he and Kageyama can help her with a project. They leave the station and not notice that Madoka is happily crying of her daughter finally standing up for herself.

The next day, Yachi approaches Takeda; informing him she is aware of the funding shortage for the team and offers a solution that may help. As the team continue to study for their exams, Yachi is working on a new poster and receives help from her mother on how to best gain attention.

While riding his bike, Hinata stops in front of a store when something catches his attention. After he has a flashback of when Yachi had previously asked him and Kageyama for a photo of Hinata doing a spike, Hinata stares in wonder at the poster with him on it.

Soon the students are finishing exams and Takeda learns that Yachi's poster has worked as offers for donations are being called in.

In the gym, the team has slipped into their jackets and line up as Daichi announces that, with exams now over, Yachi is officially joining the team as their new manager. She is presented with her own team jacket and the boys give her a big welcome. Beaming with joy, Yachi promises to do her best for them.

The episode ends with Hinata, Kageyama, Nishinoya and Tanaka nervously waiting for the results of their tests.

Retrieved from "https://haikyuu.fandom.com/wiki/%22Townsperson_B%22_(Episode)?oldid=95252"
Community content is available under CC-BY-SA unless otherwise noted.