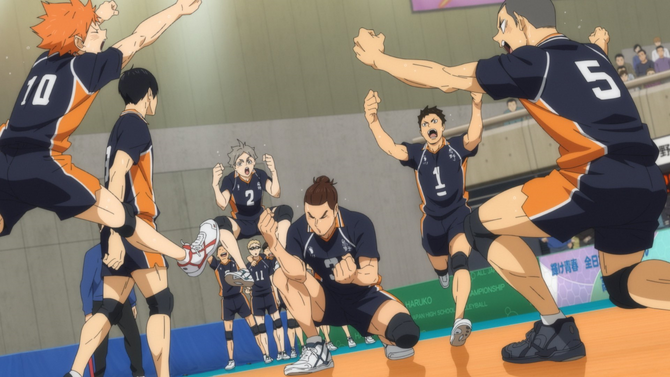 "A Chance to Connect" (Japanese: がれるチャンス, Tsunagareru Chansu) is the eleventh episode of Haikyū!! To The Top, based on the manga Haikyū!! by Haruichi Furudate. The episode premiered on March 20, 2020.

With Kageyama back on track, Karasuno begins to power through the rest of the set and show they are not to be underestimated. At the same time, the Tsubakihara team starts doing all they can to ensure that they did not come to the Spring Tournament as mere participants.

Kageyama finds his groove and executes a perfect quick with Hinata. The commentators highlight Hinata as the shortest middle blocker while the spectators are in awe of his speed. In one of the balconies, Atsumu Miya is watching the game and sees a difference in Kageyama's demeanor since the Youth Camp; he is also intrigued by Hinata.

A brief flashback is seen when the first-year Daichi, Sugawara, and Asahi were encouraged by their captain to take any chance they can to make it to Nationals. It turns out former Karasuno captains, Hidemi Tashiro and Hiroki Kurokawa, are watching the game with Karasuno's cheering section. Tashiro becomes emotional at seeing Daichi receive Maruyama's serve with ease.

Karasuno launches a synchronized attack, and Tsubakihara tries not to focus solely on Hinata. Kageyama surprises everyone by pulling off a successful setter dump. He is showered with cheery insults by the team while Asahi defends him. Before serving, Kageyama feels the energy from the gelatin he ate earlier and notes his stomach to be in ideal condition. Teradomari receives his serve but sends the ball directly back to Karasuno. Nishinoya makes an overhand pass. Shimada believes that Kageyama will not be able to set right after serving but watches in amazement as the setter rushes forward to deliver a quick set to Hinata.

Hinata scores unmarked and closes the point gap to one. While Kageyama and Hinata bicker, the commentators introduce Kageyama as a high-caliber player selected to attend the All-Japan Youth Camp. Takeda muses over Kageyama's incredible talents and attributes his overwhelming passion as the reason that he was unknown during middle school but now is catching the world's attention. Ukai says Takeda is overexaggerating but silently agrees in his mind.

Tsubakihara calls a time-out. Coach Ōsado warns the team about falling into Karasuno's trap if they only focus on stopping Hinata. He urges the team to use read blocking and concentrate on what they can do well. Tsubakihara head back to the game ready to crush the positive atmosphere Karasuno built.

Kageyama sends a serve so strong that it knocked Maruyama off his feet upon contact. Echigo sets to Teradomari, who spikes with enough force to drive the ball into the stands. Hinata moves into the back row, much to Tsubakihara's relief. However, Echigo feels uneasy facing off against Tsukishima, knowing that the first-year middle blocker is incredibly persistent and had blocked Ushijima.

In the next rally, Tsukishima lands a one-touch on Teradomari's spike. Daichi spikes the ball over, but Maruyama receives it. Echigo sets for Atema only for Tsukishima to interfere again. Once Maiko receives Asahi's spike, Teradomari goes on the offense. As Tsukishima leads Daichi and Asahi in blocking, he recalls that Teradomari has more power than most high school players but tends to use cross shots most of the time. Teradomari refuses to be underestimated by the Karasuno blockers and spikes a straight shot past them. To everyone's surprise, Hinata is in place to receive but takes the spike to the chest after stepping too forward. Asahi pushes the rebounding ball past Atema and scores when Echigo fails to receive it.

Karasuno is now tied with Tsubakihara. Yamaguchi and Kinoshita rub their chests in pain at seeing Hinata's receive. Yamaguchi wonders if Hinata should be considered lucky or unlucky, but Nishinoya points out that Hinata purposely positioned himself to receive.

Later in the game, Tsukishima spots a back-row attack attempt and puts up a double block with Asahi. Maruyama switches to a feint at the last second. Hinata surprises everyone again by being in the right place to receive, but he misjudges the distance and is hit on the shoulder. Tanaka returns the last hit to a back spot that Kaikake is barely able to save. As Kurokawa watches, he realizes that Tanaka is much more thoughtful in his actions compared to his tryouts when Tanaka always spiked at full power.

Echigo sets the ball into a tough spot and forces Kageyama to get the first touch. Tsukishima is called to make the set as Asahi calls for the last hit. Sugawara notes that Tsukishima's sets are full of care despite being a bit off. Tsukishima remembers Goshiki's complaints about his sloppy sets and sends a high toss to Asahi. The ace is moved by Tsukishima's consideration and smashes the ball off a triple block to put Karasuno in the lead.

Tashiro is overjoyed at seeing Asahi's growth in more than just his appearance. Asahi praises Tsukishima for his set, but Tsukishima is still having trouble grasping a sense of distance in the new environment. He then notices Kageyama glaring at him and asks the setter not to react the same way Hinata would. Meanwhile, Hinata is heckled by the Tsubakihara side for his body receives. However, Daichi knows that Hinata is starting to read the players' forms instead of relying on instinct alone.

Hinata makes his third serve and prepares to receive the returning spike, but Tsukishima gets a one-touch on it. The team executes a synchronized attack while Sugawara calls for Hinata to perform a Back Minus Tempo attack. Hinata scores and puts Karasuno at a two-point lead. Tsubakihara calls for another time-out to help keep the players level-headed. On Karasuno's side, Ennoshita questions Sugawara on what he called Hinata's attack. Sugawara explains he dubbed Hinata's quick back attack as the Back Minus Tempo, and Nishinoya suggests they add "Thunder" to the end. Hinata is excited about the idea, but Sugawara says this will just make it sound like one of the libero's techniques. Before they go back onto the court, Kageyama warns Hinata not to mess up his next serve.

Hinata's next serve goes out despite promising not to mess up. Later, Kinoshita is subbed in as a pinch server in Tsukishima's place. He aims for Teradomari, but the ball lands out of bounds. Kinoshita returns to the reserve area convincing himself of doing a decent job but soon grows frustrated for not accomplishing more. The game continues and eventually, Tanaka brings Karasuno to set point. The Tsubakihara players are unnerved by Kageyama serve next only for Kageyama to send the ball directly into the net.

With Karasuno still at set point, Coach Ōsado sends in first-year Aoi Himekawa as a pinch server. Yamaguchi and Kinoshita immediately noticed that Himekawa is more nervous than they are. As Himekawa serves, Hinata sees that he is using an underhand serve. To his horror, Himekawa messes up and drives the ball directly onto the back of Teradomari's head. Though caught off guard, Karasuno celebrates winning the first set while the audience jeers at Himekawa for botching a simple underhand serve.  A distressed Himekawa tries to apologize for his mistake but unexpectedly finds Echigo laughing at the "beautiful" sound the ball made upon contact. Teradomari is embarrassed and asks Himekawa to hit someone else if he messes up again. Despite losing the first set on a simple error, none of the Tsubakihara members blames Himekawa.

Ukai questions if the team is properly warmed-up, and Sugawara jokingly mimics Tsukishima saying that he is already exhausted. Himekawa is called into the game again halfway into the second set. He worriedly looks at Chiharu Tsukioka, feeling bad that the latter isn't given a chance to play. Tsukioka brushes off the concern and tells Himekawa to make the best of the chances he is given.

Himekawa enters the game visibly more calm than before. He serves and Karasuno is shocked to see the ball be sent high toward the ceiling. Daichi prepares to receive the falling ball but fails to do so after being blinded by the lights. Himekawa is showered with praises and encouragement from his team as he realizes that the ceiling is his greatest ally.  Despite being on the opposing side, Hinata can't help but admire the ceiling serve.

Himekawa serves again. Both Daichi and Asahi call out for the receive but a slight hesitation causes the ball to fall between them, giving Himekawa his second service ace. Asahi finally receives Himekawa's third serve, and Kageyama gives the last hit to Daichi. Daichi uses a feint to bypass a double block.  Himekawa digs it, and Teradomari scores. Karasuno calls for a time-out, and Kageyama requests for the receives to be high regardless of how short they may be.

Once the time-out ends, Himekawa resumes his serves and notices that he is being heavily observed by the Karasuno players. He uses the ceiling serve once again, but Nishinoya cleanly deals with it. Karasuno starts the synchronized attack and overwhelms Himekawa with a large number of attackers. Asahi scores and ends Himekawa's serve streak. Before Himekawa leaves the court, Echigo tells him to prepare for the third set.

Next, Asahi lands a service ace to put Karasuno 23 - 22. Now on edge, Maruyama tries to calm the team by reminding them that they also have a powerful ace and level-headed captain. Though they are all aware of how strong Asahi is, Maruyama advises the rest of them to focus on receiving his serve as it will give them a better fighting chance.

Maruyama receives Asahi's second serve. Echigo scores with a setter dump and tells his team it's too early for them to head home. Kageyama and Tsukishima fail to match up in the next rally; Kageyama thinks Tsukishima is worn out already while Tsukishima blames Kageyama for setting the ball higher than usual. Daichi saves the ball and scores with the determination not to let Karasuno head home too early either. Karasuno reaches match point.

Karasuno substitutes Sugawara in during Tsukishima's turn to serve. Sugawara pushes aside his nerves and focuses on what he must do with a clear mind. He aims his serve at where Echigo will be and nets a flaky first pass from Maruyama. Seeing Teradomari approaching, Sugawara recalls the ace tends to hit in the direction of where his body is facing. Asahi receives, and Sugawara sets to Tanaka. The second-year attempts a cross shot, but it is picked up due to not having enough power behind it. Daichi receives the next spike. Hinata attacks with a quick, but Echigo bumps it. Maruyama goes on the offense while Sugawara takes a few steps back. When Maruyama tools the block, Sugawara gives chase and receives.

With both teams eager to win, Hinata acts as a decoy and baits Iwamuro into blocking early. This creates an opening for Asahi to score. While watching, Tashiro reaffirms his belief that opportunity favors those who are prepared. Asahi lands his spike and wins the game for Karasuno.

Retrieved from "https://haikyuu.fandom.com/wiki/A_Chance_to_Connect_(Episode)?oldid=95061"
Community content is available under CC-BY-SA unless otherwise noted.