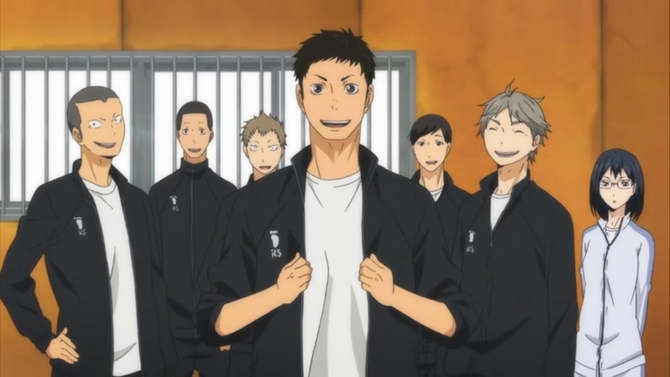 A Coward's Anxiety (Japanese: の, Shōshinmono No Kinchō) is the fifth episode of the Haikyū!! series, written and illustrated by Haruichi Furudate and published in the manga magazine, Weekly Shōnen Jump. The episode premiered on May 4, 2014.

Kageyama and Hinata's combos start improving, and Hinata's skills as a decoy begin to emerge. Kageyama, Hinata, and Tanaka are able to rally and win the 3-on-3 first-year match, allowing Kageyama and Hinata to be accepted as official team members. As soon as they receive their team jackets, advisor Ittetsu Takeda arrives and announces a practice match with Aobajōsai. However, there is one condition: Tobio Kageyama must act as the setter for the entire match.

Kageyama thinks to himself to be aware of the ball, blockers, and spikers. He can’t overlook any details. With the perfect timing and angle, Kageyama tosses to Hinata. The spike successfully hits Yamaguchi, who fails to receive it, giving Kageyama and Hinata’s team the point. On the side, Sugawara and Kinoshita are awed by the spikes and Kageyama’s true ability as a setter. Sugawara comments that Hinata was the one who was able to bring this out.

As Kageyama's sets start hitting Hinata's hands every time, Tsukishima is forced to change his tactics at blocking and starts to block Hinata. This frees Tanaka up on the other side, and the team of Kageyama, Hinata, and Tanaka wins the first round with 25-23.

Kageyama and Hinata's team continues to score in the second round, and this causes Tsukishima to play more seriously (as seen when he takes off his sweater). The accurate tosses are starting to take their toll on the first-year duo, as Ennoshita, Sugawara, and Kinoshita note, but the third year can tell that despite the fatigue, Kageyama and Hinata are truly having fun. The team then wins against Tsukishima, Yamaguchi, and Daichi with the score of 25-21.

At the end, Tanaka goes up to Sugawara and Daichi, and asks if they knew the first years would be like this. The two-third years deny this, and Daichi reveals that he had hoped that they would simply fight together, and did not expect them to make each other stronger: as a duo, they may exceed all expectations.

Hinata and Kageyama walk up to Tsukishima and Yamaguchi, and Hinata holds out his hand to the blond to shake. Tsukishima declines, and Hinata whispers to him that they would kick him out of the team if he doesn't show team spirit. However, Tsukishima reveals to the two that they were kicked out because they had ignored the captain, started their own competition, and knocked the dean's wig off his head. Off to the sides, Tanaka wonders what they are doing, and Hinata is finally able to shake Tsukishima's hand, much to his chagrin.

With the win, Kageyama and Hinata are accepted as official team members, and Daichi accepts their application forms. Daichi calls Shimizu over and she opens the cardboard box that contains the Karasuno High School Volleyball Club jackets. Kageyama and Hinata put them on almost immediately; however, Tsukishima had only put it on when Sugawara and Tanaka chanted for him to do so. With all the first years donning the jackets, the volleyball team officially welcomes them in.

Just then, advisor, Ittetsu Takeda arrives and says he has been able to arrange a practice match with Aobajōhsai, one of the top four teams in the prefecture. However, there is one condition: Kageyama must act as the setter for the entire match. Tanaka responds to this by questioning whether Seijō actually wanted to play against them, as it seemed as though their main objective was to assess Kageyama's abilities: in all, it appears as though the team was underestimating Karasuno. Sugawara, the official setter, seems unfazed and voices out that he is curious as to whether the first-year duo's quick would work on the top four teams. The practice match is to be held after school later in the week, and Takeda reminds them not to be late.

When the school day ends, Kageyama catches up with Sugawara on their way home and tells him that he would do his best to earn his place on the team. Sugawara confesses that he didn't think that Kageyama would think about that at all. Kageyama is confused, and the third-year further elaborates that he could be thinking that way because Kageyama is superior to him in athleticism and talent. Kageyama replies that you can't make up for the lack of experience that easily, and also he has to earn the trust of the other members, which Sugawara already has.

Arriving at the Foothill store where Daichi enters to buy pork buns, Sugawara worriedly asks if Kageyama would be okay to play against Seijōh, since his former teammates would be there. Kageyama says that he should be okay if they are playing against them, as he would be fighting with everything he's got. Daichi comes back out with the buns, and Hinata eats them immediately, causing Kageyama and Tanaka to scold him. Ukai comes out and yells at the boys to not make a ruckus outside the store. Munching on the bun, Hinata contemplates how he now has a team that can actually play volleyball.

Daichi asks Kageyama about his thoughts on what position Hinata should play, and back at the courts it is revealed that Hinata would be the middle blocker, where Tanaka adds is a position where height matters. Takeda reads out the definition for the positions, and Kageyama tells Hinata that he is the ultimate decoy, hence the position he has been assigned to. His height is not required to be efficient in completely blocking the ball, but with his fast reflexes and high jumps, Daichi just wants Hinata to touch the ball for their team to easily continue the game when he is positioned at the front. Kageyama stresses the importance of Hinata's position, and this, in turn, stresses Hinata out. to the point where he blows a fuse.

At the corridors, Michimiya chats with Daichi about the upcoming match against Seijō. Daichi tells her about the interesting first-years in his team, and how when they start playing their part, Karasuno would improve explosively.

Sugawara leads Kageyama and Hinata to the club room, and they get changed into their sports gear. Hinata denies being intimidated by Aobajōshai, and puts on his jacket as a pair of pants (which show his true emotion at the time). Kageyama, Daichi, and Sugawara wonder whether Hinata would be alright for the match, since it would be his second game against another school in his entire time playing volleyball. Hinata stresses about whether he can play well, and reveals that he doesn't want to be replaced hence adding to the pressure. Sugawara asks Kageyama to not make any more wisecracks at Hinata in hopes to calm him down. Hinata is still in his own world when Tanaka shouts down that he is wearing the second-year's pants. A girl from the tennis club sees this occurring and calls Tanaka a pervert.

At home, Hinata can't sleep and his little sister has to go to his bedroom to tell him to quiet down. Kageyama is tossing a volleyball in his bedroom, and his mind wanders to a boy with brown hair in his Kitagawa Daiichi volleyball uniform.

The day of the practice match arrives, and Karasuno makes their way to Aobajōsai. Hinata, with his lack of sleep and nerves for the match ahead, vomits onto Tanaka's lap. Sugawara, Daichi, and Kageyama reveal that his anxiety is worse than they had expected.

Retrieved from "https://haikyuu.fandom.com/wiki/A_Coward%27s_Anxiety_(Episode)?oldid=95124"
Community content is available under CC-BY-SA unless otherwise noted.