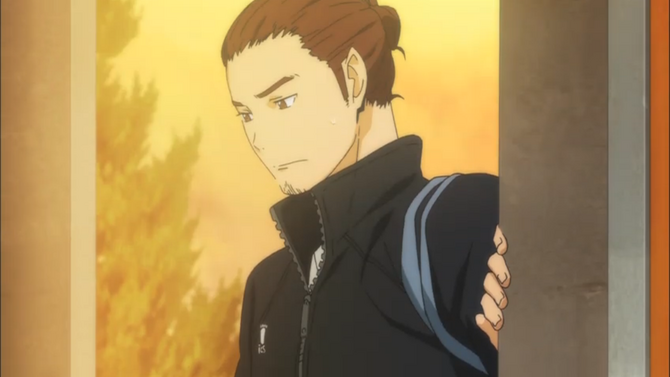 A Toss to the Ace (Japanese: エースへのトス, Ēsu e no Tosu) is the ninth episode of the Haikyū!! series, written and illustrated by Haruichi Furudate published in the manga magazine, Weekly Shōnen Jump. The episode premiered on June 1, 2014.

Keishin Ukai agrees to Karasuno's coach after he learns of the upcoming practice match, but only until the practice match is finished. To familiarize himself with the current players' abilities, he arranges a match for them against the neighborhood volleyball association. Nishinoya and Sugawara are placed on the association team to allow an even match, as only four of the players had been able to make it. Filling in the last spot is Asahi Azumane. Now, Asahi must prove he deserves the title ace and get past the triple block of Kageyama, Tanaka, and Tsukishima to regain his confidence.

Asahi’s at Karasuno’s gym, watching Hinata and Kageyama practice. He looks at his hand and remembers his experiences with volleyball. Hinata suddenly exclaims that they’re going to be able to beat Nekoma with their quick, surprising Asahi. Daichi appears behind him and reveals the time for the match, scaring Asahi, who quickly attempts to run away. Daichi tells Asahi to go to the match since it’s a rare opportunity for them to face Nekoma again, but Asahi responds that he lost face with Sugawara and Nishinoya. Daichi simply teases Asahi for being such a wimp and leaves. He remarks that despite his attitude, if Asahi still likes volleyball, that’s reason enough to return to the club.

At the Sakanoshita Shop, Ukai’s surprised by Takeda’s appearance at his store again. After Takeda mentions the coaching position, Ukai explains that he doesn’t want to go back to that gymnasium because it brings back too many nostalgic memories. Takeda then brings up the match against Nekoma and the fact that the current coach may be acquainted with Ukai. Suddenly motivated, Ukai accepts Takeda’s request and prepares to go to Karasuno, but makes a phone call first to an unknown person.

Elsewhere, Asahi’s sitting on the grass while thinking of Daichi’s words about his reasons for returning to the club. He seems to make a decision and gets up.

The Karasuno Neighborhood Association arrives at the gym and they get started. Nishinoya doesn’t want to play without Asahi, but gives in because he’s the only libero present. As Nishinoya walks resignedly to his position, Hinata suddenly calls out Asahi. Unnerved, Asahi tries to explain himself, but gets forced inside by Ukai before he can.

Now more motivated with Asahi back, everyone gets into their positions. Ukai tells Karasuno to have one setter be on the Association’s side and Sugawara volunteers himself for it. Kageyama tells him to not step down for him. Sugawara replies that when Kageyama joined, he thought they would have to compete for the spot, but he ended up feeling relieved instead. When he tosses, the spikers always get blocked so he ended up feeling scared. Because of this, he wants to try tossing to Asahi again, hence his joining Asahi’s side.

The match begins and Takinoue scores right away with Sugawara’s toss. Sugawara reveals to Nishinoya that he needs to put more effort into the play so they won’t have to solely rely on the ace again. Asahi watches their interaction, thinking to himself that Sugawara has grown dependable while he still remains the same, nervously flitting between returning and staying away from the club. Despite that, he really does like being here.

Hinata and Kageyama perform a quick, shocking everyone in the gym. Asahi remembers Hinata’s words about getting past all the blockers and thinks back to his match against Date Tech, where he was blocked completely. Asahi started to lose his motivation and stopped calling for tosses. Back at the gym later, Nishinoya blamed himself and Asahi angrily asked why no one was blaming him when it was solely his fault. Nishinoya questions him about the last point of the match, when Asahi didn’t call for the spike. Asahi replied that no matter how many tosses he got, he would never spike. Nishinoya grabbed Asahi and yelled at him to not give up until he tries. He brings up his lack of height and libero position and how he can’t score and has to rely on spikers like Asahi. He says he doesn’t care if Asahi keeps getting blocked, but only if Asahi gives up. Asahi leaves without another word.

The next day, Nishinoya approached Asahi in between classes, asking him about his absence during practice. Asahi lied and said that he lost interest in volleyball and would be wasting Nishinoya and Sugawara’s efforts if he stayed. Nishinoya continued yelling at Asahi, catching the vice-principal’s attention. When the vice-principal tried to stop Nishinoya, the latter pushed him away, causing him to crash into a vase.

Back in the present, Asahi tells Nishinoya that no matter how many times he gets blocked, he still wants to try. A toss is sent to him and he spikes into the blocking formation of Kageyama, Tsukishima, and Tanaka. Though he blocked the spike, Kageyama’s pushed back by the sheer force of the ace’s strength. Just as the ball falls towards the floor, Nishinoya receives it. Sugawara tries to decide who to toss to and Kageyama yells at him to keep sending the ball to Asahi. However, Asahi doesn’t seem to be waiting for a toss.

Asahi thinks back to his teammates’ encouragement and all their attempts to bring him back to the club. He concludes that he is indeed the ace of the club and calls for a toss. Sugawara decides and sends it to him. Asahi remembers that he’s not playing alone, and spikes, blowing past Kageyama, Tsukishima, and Tanaka.

Retrieved from "https://haikyuu.fandom.com/wiki/A_Toss_to_the_Ace_(Episode)?oldid=86207"
Community content is available under CC-BY-SA unless otherwise noted.