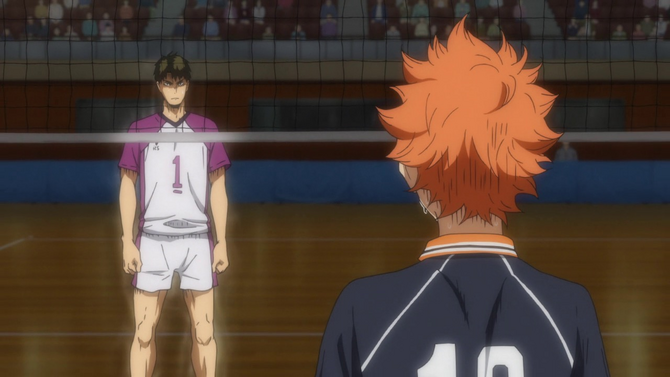 "An Annoying Guy" (Japanese: な, Iyana Otoko) is the eighth episode of Haikyū!! Karasuno High School vs. Shiratorizawa Academy High School, based on the manga Haikyū!! by Haruichi Furudate. The episode premiered on November 25th, 2016.

The intense final set of the match between Karasuno and Shiratorizawa continues. An annoyed Ushijima resolves to crush Karasuno and Hinata as the latter scores yet another point. When Kageyama came back to the court, he and Hinata scored again with their quick attack. Just when they were about to give up as Shiratorizawa takes again the lead, an injured-but-determined Tsukishima returns to the court.

After Tendō celebrates, Sugawara stands up and tells him that they'll do it again. With the score at 8-4 to Shiratorizawa, the players switch sides. During the transition, Ukai tells Hinata to pay close attention to his timing during the blocks, and if he thinks he'll be slow, he can switch to a soft block, like the block they used to counter Hyakuzawa.

After the switch, Ushijima's serve hits the net, finally giving a point to Karasuno. In the stands, Saeko, Takinoue and Shimada talk about how many serves in a row Ushijima had. With the point gain, Hinata rotates to the front row. Narita serves and Reon receives it, though it's not clean. Ushijima digs the ball to Tendō, but Narita receives it. Tanaka gives the ball to Asahi in the back row, but he gets triple blocked. As the ball heads towards Hinata's face, he gets hit on the side, but the ball ricochets upwards. After he recovers, he gets ready for a first-tempo attack, but both he and Tendō get shocked when the ball goes to Tanaka. With one blocker, Tanaka scores, bring the score to 8-6.

Tanaka and Sugawara check on Hinata to see if he's ok. When Hinata explains that he didn't want to get hit in the nose as he would be benched if he gets a nosebleed, Tanaka and Sugawara both get shocked to see that Hinata saw the ball heading towards him and moved his head. After that, Ushijima remembers meeting Hinata and Kageyama. When Hinata stole the ball from Ushijima, Ushijima thought that Hinata would be one of those small, yet talented players. But after seeing Hinata during the match, Ushijima was wrong. Yet something about Hinata annoys Ushijima, making Ushijima determined to beat Hinata. After feeling Ushijima's aura, Hinata jumps back in shock.

In the stands, Takinoue and Shimada notice that Kageyama's warming up. After Reon scores, the score is 9-6 to Shiratorizawa. As Hinata recovers from the face hit, Saeko mentions that it's reassuring, knowing that someone is there to follow through. Shimada explains that, that one instance, Asahi couldn't hit past the block. But normally, Karasuno's attack style is for everyone who can attack should attack. They trust that they won't fail, but if they did, they're out. As Goshiki goes for a spike, the block narrow his options so the ball can go to Daichi. As Daichi receives, the ball goes long, making Tendō push the ball back. With Sugawara having the first touch, Nishinoya runs to set it. As Karasuno does a 5-man synchronized attack, Tendō starts to think about the possibilities of who will spike the ball. However, after getting lost in thought, Tanaka spikes and scores. After Tendō gets scowled at by Washijio, Kageyama makes a substitution with Sugawara.

After being subbed in, Kageyama does a powerful serve that makes Yamagata's receive send the ball back over to Karasuno's side. As Daichi calls for the ball, Kageyama immediately goes for a set, shocking everyone. Quickly afterward, Hinata spikes the ball straight down the net, scoring a point and closing the point gap.

After a few rallies, Shirabu is subbed out for Semi. In Shiratorizawa's stands, two students have a conversation about why Semi isn't their starting setter. On the court, Semi thinks of the reason why he's inferior to Shirabu: it's because he wants to show off his power, which is not what Shiratorizawa needs right now. But with serves, he can show off his strength. With that, he gets a no-touch service ace, bringing the score to 12-9. Karasuno immediately takes a time-out, while Shiratorizawa's cheer starts. Suddenly, Saeko shouts to everyone in Karasuno's stand that they should be cheering. While Ushijima, Semi and Tendō talk, they get interrupted when they hear the loud cheers from Karasuno's stand. As Karasuno's team becomes overwhelmed, Shiratorizawa's stand starts to sing their national anthem, overpowering Karasuno's cheers. While they sing, the time-out finishes and Semi serves. Tanaka receives it, but it's a chance ball for Shiratorizawa. Semi sets to Ushijima, but as he spikes pass Asahi's block, Hinata does a close receive and the ball ricochets over the net and lands on Shiratoirzawa's court.

With the score at 12-10, Semi is subbed out and Hinata is subbed out for Yamaguchi. Before Yamaguchi serves, he thinks about aiming towards Ushijima. When he serves, the ball hits the net and Yamagata barely saves it. With a chance ball to Karasuno, they do a synchronized attack. Daichi spikes but he gets blocked by Goshiki. As he celebrates, it's Karasuno's point as he touched the net. Yamaguchi serves again but Goshiki's receive is off. When Yamagata digs the ball to Ushijima, his spike is deflected by Narita. Tanaka receives the ball and Kageyama sets to Narita. But when they're not in sync, Narita barely touches the ball and sends it over, tying the score at 12-12. Yamaguchi's next serve goes long, but Goshiki touches the ball and fails to receive it properly. Before Washijo calls a time-out, Ushijima tells Goshiki that he shouldn't panic with his talent. With that said, Washijo doesn't call a time-out and Goshiki recovers. Reon thinks that Ushijima's words don't have any hidden meaning to them, making his words true. As Yamaguchi's serve heads towards Ushijima, Reon receives it and Goshiki earns a point, making the score 13-13. With Goshiki up to serve, he hits the ball gently, shocking everyone. When Nishinoya receives it, Ushijima goes for a direct spike and scores. With Shiratorizawa at match point, Goshiki serves towards Daichi, who receives it. With a synchronized attack, Daichi spikes and scores, making it a deuce. Saitō says that Karasuno should be running out of stamina, yet they all make an approach. Washijo admits that the synchronized attack is effective.

A flashback is shown to when Washijo was in high school, saying that he's confident in his receives and attacks, but the coach tells him, if only he was taller. Washijo starts to get upset and angry that he can't fight because he's short and starts to envy the taller players, yet he admires them. He then questions himself if he wants to find a way to fight even though he's small. The flashback ends and comes back to the match.

Daichi serves next and the ball barely makes it over the net. Reon saves it and Ushijima gives the ball to Goshiki in the back. With his spike deflected, Tanaka and Asahi keep the ball in play. Kageyama gets the last hit and sends the ball over, making Shirabu have the first touch. Kawanishi digs the ball for Ushijima. When Washijo remembers when he questioned if he wanted to find a way to fight even though he's small, he says no, and wants a simple strength that will make anything surrender. Ushijima spikes the ball, but Nishinoya receives it. Karasuno barely keeps the ball in play and fight harder with their spirits. However, Ushijima spikes past their triple block, bringing the score to 15-14. As Karasuno's morale is low, Keishin shouts "Volleyball is a sport where you're always looking up!" With those words, Karasuno's morale rises. In the stands, Yachi returns and Tsukishima and Kiyoko run back into the court.

Retrieved from "https://haikyuu.fandom.com/wiki/An_Annoying_Guy_(Episode)?oldid=94602"
Community content is available under CC-BY-SA unless otherwise noted.