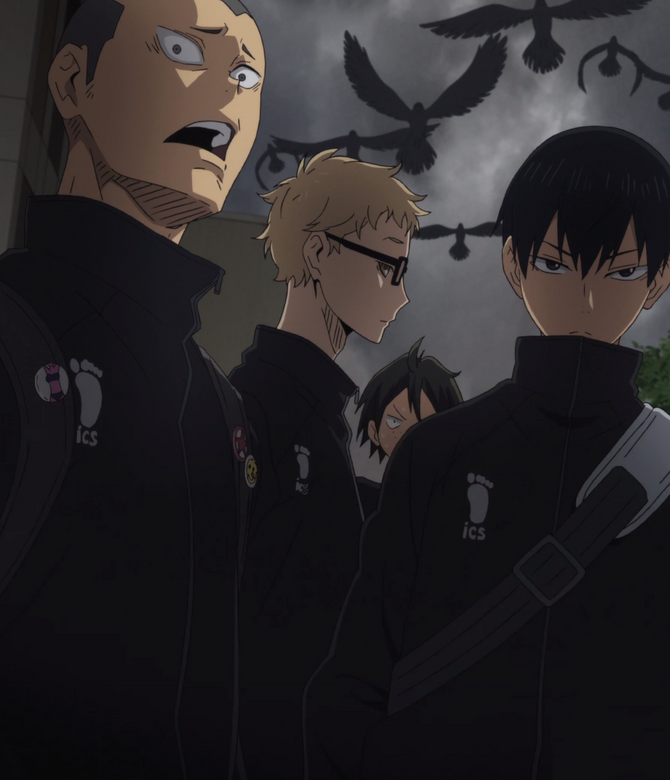 An Interesting Team (Japanese: いチーム, Omoshiroi Chīmu) is the sixth episode of the Haikyū!! series, written and illustrated by Haruichi Furudate and published the manga magazine, Weekly Shōnen Jump. The episode premiered on May 11, 2014.

Karasuno arrives at Aobajohsai, but Hinata's anxiety doesn't change. Before the match even begins, Kageyama runs into his old teammate, Kindaichi, who continually calls him king of the court and brings up his past. Karasuno does poorly at first due to Hinata's mistakes but once the match gets underway, Hinata and Kageyama's quick attack proves to be an effective weapon. As Karasuno appears to be winning, Kageyama reveals that he doesn't think Aobajohsai's current setter is the official one.

Karasuno arrives at Aobajohsai and the players get off the bus. Hinata apologizes to Tanaka, who dismisses it and teases him a little, only to add more pressure on the first year. Hinata freaks out and has to run to the bathroom. Watching him go, Kageyama gets annoyed and threatens to hit Hinata.

Elsewhere, Kindaichi and Yahaba are walking together while talking about Karasuno and Kageyama. Kindaichi, a former member of Kitagawa Daiichi, derides Kageyama’s lack of ability to play in a team. They then comment on other members of Karasuno and as Yahaba insults Tanaka’s appearance, the Karasuno second year appears from behind a building, scaring the two. Kageyama, Tsukishima, and Yamaguchi come to Tanaka’s side and the latter tells the two to not underestimate Karasuno.

Tsukishima taunts the two but before they can continue, Daichi interrupts and stops Tanaka. He apologizes for his team before forcing the underclassmen to leave. As Kageyama passes Kindaichi, the latter asks him what kind of dictatorship he belongs to now, but the setter ignores his comment, shocking him.

Karasuno arrives at the gym and greets Aobajohsai. Hinata’s immediately unnerved by his opponents’ high skill level and freaks out again. Tanaka tries to encourage him, but only succeeds in doing the opposite. Hinata ends up running to the bathroom again.

Tanaka appears suddenly and laughs at Kindaichi, warning him that this match will show Kageyama’s change. Tanaka looks for Hinata for backup but the latter, affected by Kindaichi’s words, runs back into the bathroom.

Back at the gym, Daichi tries to help Hinata and after failing, turns to Kiyoko for help, but she ends up making it worse. The match soon begins and Aobajohsai’s surprised by Hinata’s height and Kageyama’s presence on a team like Karasuno. The match starts off badly when Hinata takes Daichi’s receive by accident and Aobajohsai scores the first point by blocking Tanaka. For the first part of the match, Hinata continues messing up, angering Kageyama, who yells at him. Kindaichi and Kunimi watch scornfully and comment on how Kageyama hasn’t changed at all.

Right when Aobajohsai is at 24 points, it becomes Hinata’s turn to serve. Anxious about the prospect of missing and making things worse for his team, Hinata messes up and spikes the ball into the back of Kageyama’s head instead. Kageyama approaches Hinata slowly and questions him about his anxiety while slapping his own head to emphasize his point. Intimidated, Hinata starts backing away in anticipation of his punishment, but Kageyama only tells him to pay more attention before walking away.

Afterward, Hinata regains his composure and lines up with his team. After they bow, Tanaka approaches the first year and yells at him to stop messing up while reminding him to rely more on his teammates. Motivated, Hinata changes his attitude.

The match resumes and Kageyama tries a quick with Hinata right away. The latter misses and Kindaichi warns him about Kageyama’s reaction, but the setter only apologizes. Stunned, Kindaichi and Kunimi watch their former teammate and try to figure out what’s going on.

Kageyama and Hinata try a quick again but succeed this time. The members huddle up for a cheer and Hinata exclaims that he feels like he’s on a team as he had never done anything like that before. The next move, Tanaka and Hinata rush forward for a spike, but Kageyama uses Hinata’s natural abilities as a decoy instead to let Tanaka get the point.

The players take a quick break and Daichi notices Hinata staring at his hand. The latter reveals that he’d never played on an actual team before but now, he’s surrounded by players who are all better than he is so all he has to do is trust them and play. On Aobajohsai’s side, Kindaichi’s still trying to figure out Kageyama’s behavior and synchronization with his team. He concludes that it’s only because Hinata’s can spike Kageyama’s toss, but Coach Irihata explains that Hinata wasn’t looking at the ball when he spiked, implying that Kageyama has truly changed. Mizoguchi wonders if Kageyama’s would help Aobajohsai if he had chosen it instead of Karasuno, but Irihata replies that Kageyama only plays this way because Karasuno and Hinata changed him.

Kageyama and Tsukishima are placed next to each other, forming a good defense zone despite their poor relationship with each other. On the side, Irihata remarks that he wasn’t expecting Karasuno to be this strong and unpredictable.

After winning the first set, the players leave the court for a short break. As Daichi expresses his relief that there aren’t any players like Kageyama on Aobajōsai’s team, the first-year setter reveals that Yahaba probably isn’t the main setter. Just as he finishes saying that, everyone hears screams suddenly. Kageyama turns around to see someone greet the coach on Aobajohsai’s side.

Retrieved from "https://haikyuu.fandom.com/wiki/An_Interesting_Team_(Episode)?oldid=95125"
Community content is available under CC-BY-SA unless otherwise noted.