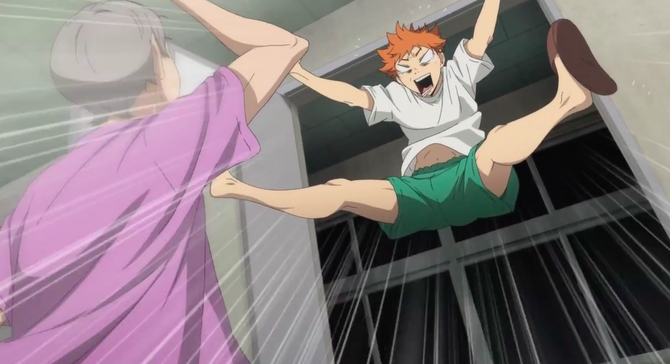 Karasuno finally arrives in Tokyo, but Hinata and Kageyama have to stay behind for their supplementary exams back at school. The first year duo is not discouraged though, and decides to take a ride from Tanaka's sister to join the team in Tokyo.

The Karasuno team arrives at Nekoma High and are greeted by Kuroo and Kai. Nishinoya and Tanaka mistake a near by steel tower for the Tokyo Tower, causing Kuroo to laugh hysterically. As the team gather themselves, Kuroo questions Daichi after noticing a few missing players.

A flashback scene shows that Hinata and Kageyama each failed a test and therefore may not be able to make it to the training camp as they will have to do make-up work. Sugawara questions how the two failed, which Tsukishima explains that Hinata failed his English test because he placed his (correct) answers in the incorrect places and Ennoshita explains that Kageyama, despite having perfect kanji, didn't expect so many reading comprehension questions and therefore failed Japanese. Hinata and Kageyama are still determined to make it to the training camp by any means before Tanaka steps up and offers that his sister, Saeko, will be able to take them to Tokyo once they have finished their make-up tests.

Back at Nekoma High, Kuroo figures out that Hinata and Kageyama will have to do supplementary work and Daichi tries to explain the situation but is interrupted by Yamamoto when he sees that Karasuno has a second female manager; exclaiming 'one is the sexy kind and one is the cute kind'. After Tanaka teases Yamamoto, Kuroo offers the team the chance to get ready before heading to the gym to meet the rest of the teams.

At Karasuno High, Hinata and Kageyama are taking their make-up exams with the teacher exclaiming how serious the two are being. After they are done and have passed their tests, the two hurriedly run outside the school and meet with Saeko who proudly proclaims she will able to get them to Tokyo in no time; which Hinata and Kageyama quickly realize by her erratic driving.

Now ready, the Karasuno team enter the Nekoma gym and spot all of the teams that have already arrived and are practicing. Kuroo explains to Daichi how their team will be participating and that the penalty for a lost game is a round of flying laps. As the two continue to talk, Sugawara points out that Nekoma has a player that they had not met during their practice game. Asahi looks over to the mentioned player and quickly spots Lev staring at them.

On the way to Tokyo, Saeko notices that Hinata seems stressed and tries to relax him. She praises that he is very hard working to be able to continue volleyball and questions how he became interested in it in the first place. Hinata explains that he had seen the tv program of Karasuno playing in the nationals several years back and, in unision with Saeko, says that 'he saw the Tiny Giant'. Hinata questions how she knows about the Tiny Giant and is surprised when she answers she was a classmate of his and had seen several of his practice games; though never interracted with him and found him intimidating at one point.

After losing a game against Fukurōdani and doing the penalty lap, the entire Karasuno team observes the teams around them; noting their strengths and plays. (Ubugawa High has powerful serves, the Shinzen team are masters of combo plays, Nekoma High specialize in receives and Fukurōdani is a national level powerhouse team with their captain being one of the top five ace's in the nation.)

Hinata and Kageyama finally arrive after the team loses a game against Ubugawa. Now together, the team soon plays against Shinzen. Hinata and Kageyama do not hesitate to use their special quick attack; both impressing and intimidating several players that are watching. Hinata scores the winning point for the team and they are finally able to avoid the penalty laps.

Hinata begins to see that the quick attack is not working as well as it use to as it has been stopped by quick players and teams such as Inuoka, Seijoh and Date Tech. He is soon brought out of his thoughts when he sees that Inuoka had been switched out and sees Lev and his whip like spike that was easily able to get by the Ubugawa blockers.

Later that night, Hinata is chatting with Kenma and Inuoka. Inuoka praises that Hinata's quick attack is as great as ever but Hinata feels that the attack is not enough anymore. He then questions the two about their new middle blocker. Kenma tells him about Lev, a half-Japanese half-Russian first year who began playing volleyball just that year. Hinata is impressed by hearing of Lev's heritage and surprised that he only started playing in high school and learns the reason they did not meet at the practice match during Golden Week was due to Lev still learning the basics of volleyball.

While heading to the bathroom, Hinata runs into Lev and is surprised to hear that Lev doesn't speak Russian. Now over his initial surprise, Hinata introduces himself and Lev does the same before unintentionally pointing out Hinata's height which sends Hinata into a fit of anger. Lev compliments Hinata's jumping abilities but points out that he is able to jump higher, leading Hinata to jump into the air to prove he can jump higher but accidentally hits his head on the door frame.

Hinata admires Lev's spikes that seem to get through any block and Lev states this is due to him being the ace of Nekoma; though he says Yamamoto becomes angry when he claims this and Hinata points out that he plays the middle blocker position. Lev believes that the name of the position doesn't matter and that the ace is the player who can score the most points. He then parts ways with Hinata after promising that he will be the one to stop his quick attack. After hearing Lev's view of what an ace is, Hinata begins to wonder if this is true.

The next day, Karasuno is playing against Ubugawa. A time-out takes place and Hinata watches Nekoma play against Fukurōdani. When Nekoma receives the ball and Kenma goes to cover, Lev calls out for the ball. Kenma sends the ball to Lev who manages to easily score a point. Hinata and Kageyama hear Lev apologize to Kenma for 'being bossy' in calling for the ball and that Kenma was surprised to have been asked for a broad jump set; of which Lev did not actually know what it was and surprised the two that it was a play asked for out of the blue.

Hinata now seems to believe Lev's words of the ace being the one who can score the most points. The episode ends with Coach Nekomata wondering what Karasuno will do in order to grow stronger.

Retrieved from "https://haikyuu.fandom.com/wiki/Center_Ace_(Episode)?oldid=73106"
Community content is available under CC-BY-SA unless otherwise noted.