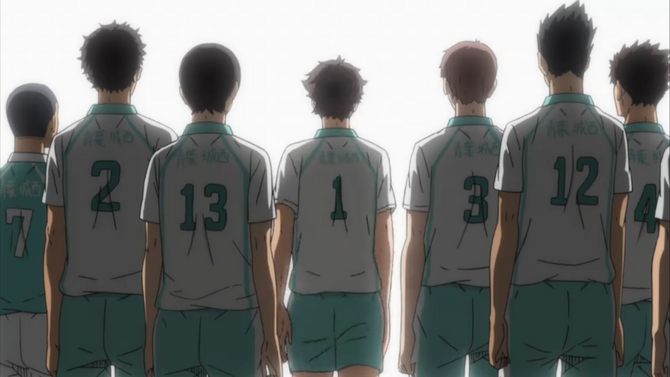 Conductors (Japanese: , Shikisha) is the nineteenth episode of the Haikyū!! series, written and illustrated by Haruichi Furudate and published in the manga magazine, Weekly Shōnen Jump. The episode premiered on August 10, 2014.

Karasuno observes Aobajohsai's match and is unnerved by Oikawa's skill in serves and tosses, especially Kageyama, who has been in Oikawa's shadow since junior high. The match against the two teams takes place the next day, and Karasuno seems to be more motivated than ever. Right away, Aobajohsai gets the upper-hand with Oikawa's setter dump and skillfully executed techniques. However, Kageyama reveals tricks of his own and performs a server dump right back, cutting Aobajohsai's lead to 2-1.

Oikawa performs a jump serve and scores his fourth aced serve in a row. Karasuno watches the match with attention and Ukai notes that Oikawa’s serves are already powerful enough, but his control on them is on another level. In addition, while the players know Oikawa’s serves are strong, they have no idea what type of setter Oikawa is. Ukai compares Oikawa to a conductor of an orchestra. Even if it’s the same music that's used and the same musicians, if the conductors are switched, the sound will change.

As Karasuno watches Oikawa set, it’s unnerved by the level of teamwork Aobajohsai shows. Kageyama reveals that Oikawa and the ace, Iwaizumi, have been playing on the same team since grade school so they’re completely tuned with each other. Adding to that, Oikawa seems to know everything about Aobajohsai and knows how to help the players play to their maximum potential.

The upperclassmen and Kageyama are intently watching Aobajohsai, clearly intimidated by their opponent’s skill. Hinata and Nishinoya suddenly exclaim that Oikawa’s cool and express their wishes to play against him, alleviating the tension among their teammates. Aobajohsai soon wins the match, and the players head home.

As soon as the bus arrives at the school, a teacher calls out to the team and reveals that it got on TV. The players crowd around the set and watch for their appearances and are shocked to discover that Shiratorizawa annihilated its opponents. When it comes to their block, they’re annoyed to see only mentions of Date Tech and then an interview with Oikawa on his opinions of Karasuno. Bluntly, Oikawa answers that Karasuno’s a good team and he’ll like to destroy it. Insulted, the players gravely head to practice.

Ukai holds a meeting to go over the match against Date Tech. He tells the players that Aobajohsai would be different from Date Tech because the former knows Karasuno’s techniques. However, Karasuno’s offense is still stronger than Aobajohsai’s. The biggest problem the players will have to face is Oikawa. This time, they’re going to focus their middle blockers on the blocks and all the other players besides Kageyama on receives. Still, as long as they believe in themselves, they’ll be able to win.

After the meeting, the players head home. Kageyama thinks back to Oikawa’s challenge from the practice match and the third years note that he looks more irritated than usual. Hinata suddenly runs up to him and exclaims that they’re going to beat Oikawa. Motivated, Kageyama tells him to shut up and states that he knows they’re going to win.

At Aobajohsai, Oikawa and Iwaizumi are packing up when Iwaizumi notices a DVD of Karasuno’s match in Oikawa’s bag. He tells Oikawa to stop staying up so late and Oikawa teasingly asks if Iwaizumi’s his mother. Iwaizumi insults him in return.

Elsewhere, everyone is getting ready for the match. Ukai watches a video of Aobajohsai’s game against Omisaki and notices something about a particular player. Kageyama’s lying in bed while throwing a volleyball up and down. Oikawa’s staying up, watching Karasuno’s match intensely.

The next day, Aobajohsai and Karasuno line up for the game. Takinoue and Shimada arrive and remark that Karasuno’s completely focused today. Takinoue asks about Yamaguchi and Shimada replies that he’d only helped Yamaguchi for a week. The first year still isn’t ready to use the serve in an actual match.

As Kageyama faces Oikawa, he thinks back to junior high, when he watched Oikawa received the best setter award. Right now, he’s about to go against Oikawa in an official match. Oikawa calls out to him and states that he’s excited to beat the “genius setter”. Hinata runs over and the two first years announce together that they’re not going to lose.

The match begins and Oikawa spikes out of nowhere, shocking Karasuno and the spectators. Oikawa challenges Karasuno and states that he’s going to do the same thing again so the players should pay more attention. While the third years are calm, Hinata and Tanaka are annoyed. Kageyama doesn’t say anything and prepares for the next move. He tosses to Hinata and the ball’s received by Watari. It gets sent to Oikawa, who prepares to spike it. This fools Hinata and Tanaka as Oikawa changes to a tossing position at the last minute. Iwaizumi gets the ball and scores.

The ball soon goes to Kageyama again. Hinata goes right up to the net and calls for a toss at the same time as Tanaka is preparing to spike. However, Asahi is getting ready as well in the back. With Aobajohsai’s attention on the three attackers, Kageyama throws the ball over for a dump, shocking everyone, including his own teammates. As he lands, he warns Oikawa that he’ll be doing the same thing again so he should pay more attention.

Retrieved from "https://haikyuu.fandom.com/wiki/Conductors_(Episode)?oldid=95186"
Community content is available under CC-BY-SA unless otherwise noted.