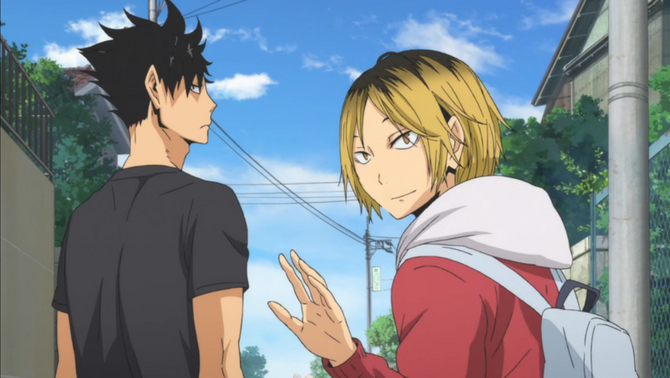 Decision (Japanese: , Ketsudan) is the eleventh episode of the Haikyū!! series, written and illustrated by Haruichi Furudate and published in the manga magazine, Weekly Shōnen Jump. The episode premiered on June 15, 2014.

The training camp officially begins and the players ready themselves for the showdown against Nekoma. Surprising backstories of the upperclassmen are revealed and Ukai struggles with his decision on the official setter; in the end, he decides on Kageyama. Nekoma arrives in Miyagi and overwhelms in its practice matches while Hinata unknowingly meets its setter, who looks forward to playing against the first year. The match against Nekoma soon proves to be Karasuno's toughest one yet.

Hinata checks his calendar excitedly before heading out, thinking about how there are only four more days until the match against Nekoma. With a libero and an ace back on the team, Karasuno’s going to play much differently.

Later that day, Ukai tells the team the schedule and how much time they have left before Interhigh. He tells the members to keep practicing no matter what and the members begin the day’s training. They go over all the basics, but Sugawara appears to be bothered about something.

At the end of practice, Karasuno heads to the facility they’re staying at for the training camp. Hinata checks out all the rooms, exclaiming excitedly that this is his first time at a training camp though Tsukishima says that it's nothing special to be excited over. Tanaka and Nishinoya are just as enthusiastic, assuming that Kiyoko would be staying with them. However, Sugawara quickly shoots them down by revealing that Kiyoko would be staying in her own home.

After a heavy dinner, Tanaka finds Hinata standing in a dimly hit hallway and informs him that the bath is open for the first years. Fearfully, Hinata reveals that there’s a stranger with them. Tanaka confidently replies that they’re the only ones in the building and Hinata may have possibly just seen his own reflection in a mirror and mistaken it for someone else. However, he begins to doubt himself when Hinata adds that the stranger is a child. As they’re trying to convince themselves that Hinata made a mistake, the said stranger appears behind them and startles them.

The "child" turns out to be Nishinoya, whose hair was flattened by the bathwater and thus changing his appearance. Tanaka scolds Hinata for his mistake before Hinata fearfully points out that Nishinoya has 'shrank'. Tanaka is quick to tease Nishinoya about this when he sees that the libero's hairstyle makes a difference in his height appearance, claiming the reason Nishinoya styles his hair in an upward spiking style is so he can look taller. As Nishinoya angrily demands Tanaka to stop teasing his height, Asahi appears with his hair down and a dim light casting a haunting shadow on his face, warning them not to be too loud or else Daichi will get angry. Shocked by his terrifying appearance, the three scream in fear while Asahi tries to assure them that he is himself and they end up getting yelled at by Daichi anyway.

The next day, the players head out for a run after practicing more on receives. Ukai and Takeda stay behind and comment on Hinata and Kageyama’s efforts, noting how each one starts early and Ukai learning of Hinata's seemingly endless stamina from biking through the mountains. Noticing Ukai’s troubled expression, Takeda asks if he’s concerned about his decision on the official setter. Ukai affirms it and compares Kageyama’s natural talent with Sugawara’s experience and trust from the team. He reveals that he has so much trouble because he’s taking into account the fact that Sugawara’s a third-year; when he was a third-year, he went through the same anguish by having his spot stolen by a younger setter. However, he ultimately decides that as a coach, he can’t let his personal feelings dictate his choices.

Elsewhere, Hinata and Kageyama are racing each other when, completely engrossed in the competition, Hinata winds up running ahead and getting lost. While looking around for the others, he spots a boy in a red jersey sitting by the road. Curious, Hinata approaches him and finds out that the guy, Kenma Kozume, is lost as well. Suddenly, Hinata notices Kenma’s volleyball shoes and introduces himself as another volleyball player. He asks the latter if he likes volleyball and Kenma responds that he doesn’t care; he only plays it because of his friends. The first year then reveals that he’s a middle blocker and adds that it’s weird for someone so short to be one.

To his surprise, Kenma sympathizes and remarks that he’s in the same position. People would wonder why he’s the setter when he’s not talented or athletic. Hinata asks if his team is strong and Kenma responds that he thinks so. The confident look in his eyes shocks Hinata, who proceeds to question him on his school. Before Kenma can answer, he’s called away by a teammate. He leaves and tells the first year that he’ll see him later, confusing the latter.

Sugawara then appears around the corner, having looked everywhere for Hinata. As they’re heading back, Sugawara notes how much hard work Hinata puts into whatever task he's doing. The first year says that he wants to get strong enough so that he can be seen as an individual and not someone who has to rely on Kageyama. He states that he wants to stand on the court. Sugawara tells him that he also wants the same and will fight his own battles as well, though Hinata doesn’t understand what he means.

Elsewhere, a few spectators watch Nekoma play and note that the setter looks pretty small and unsteady. Kuroo appears behind them, defending Kenma as Nekoma’s spine, heart and brain.

Back at the Karasuno facility, Sugawara approaches Ukai. He starts by explaining that the third years want the team to accomplish as much as it can before they leave. If Kageyama is the setter that can help make this possible, then he should be the official setter. However, Sugawara still wants to play so he asserts that he would train as the substitute in case anything happens to Kageyama. Ukai’s surprised by the third year’s forwardness and how much he's willing to step down as the official setter in order to give the team as many chances to win as possible but assures him that he will do everything as the coach to enable Sugawara to play as much as he can. Unbeknownst to the two, Daichi and Asahi are hiding behind the corner and had listened to the conversation. Daichi asserts that they will win as much as they can and Asahi agrees determinedly.

The next day, Ukai announces the starting order for the match against Nekoma with Kageyama as the setter. Afterward, Nishinoya goes to Asahi and mentions Ennoshita and Sugawara not having a place in the lineup. Ennoshita quickly responds that he is not upset about not being a regular anymore and that he did quit once, surprising Hinata and Kageyama. Later that night, Hinata asks Ennoshita about what he meant when he said he had 'run away'. He, Narita, and Kinoshita reveal that they had been playing volleyball for fun and when the former Ukai returned last year, there were many, including them, who couldn’t handle the training and had quit because now the goal was all about winning matches. However, they realized that they wanted to keep playing and returned to the team but Ukai had already left by then because of his health. Despite that, they want to do their best in order to stand with everyone else on the court.

The next day, Kiyoko arrives at the gym with the team uniforms. Hinata receives the number ten, but gets annoyed when he realizes Kageyama’s number, nine, is one number higher than his. Daichi then reminds him about the Small Giant wearing the number ten as well, causing Hinata to believe this is a sign that he is meant to become like the Small Giant despite Kageyama saying it's just a coincidence. As practice continues, Takeda asks Ukai what he knows about Nekoma. Although he is not familiar with what the current time is like, Ukai replies that Nekoma is a team with no outstanding power but strong defense–the opposite of Karasuno. This match could be a tricky one for the team.

That night, at Nekoma’s dorm, Taketora bets a yakisoba bread that Karasuno doesn’t have a female manager while Inuoka and Shibayama disagree. Fired up by this possibility, Taketora opens the window and shouts outside that Karasuno will be sorry if they do have a female manager. After Kuroo yells at him to stop his antics, Taketora asks Kenma for his opinion. Kenma doesn’t care about the managers but, to everyone’s surprise, he admits that he's looking forward to the match.

Elsewhere, Hinata thinks of the Small Giant while staring at his uniform. He compares himself to Sugawara and the three-second years who weren’t picked to be on the starting lineup, noting sternly that he can only play because of Kageyama’s toss.

The next day, the practice match begins. Karasuno and Nekoma line up in front of each other.

Retrieved from "https://haikyuu.fandom.com/wiki/Decision_(Episode)?oldid=95169"
Community content is available under CC-BY-SA unless otherwise noted.