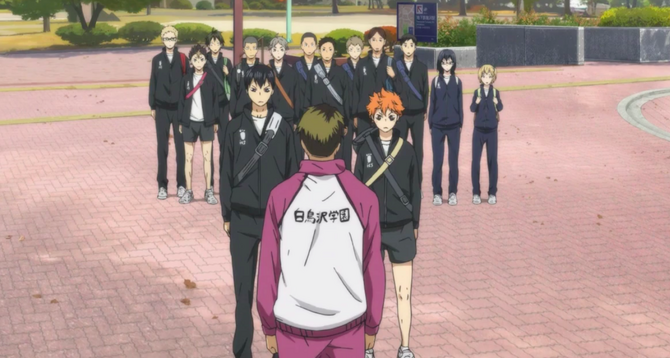 "Declaration of War" (Japanese: , Sensen Fukoku) is the twenty-fifth episode of Haikyū!! Second Season, based on the manga Haikyū!! by Haruichi Furudate. The episode premiered on March 26th, 2016.

Karasuno are through to the finals to determine the Miyagi representative for the Spring High Tournament. Aobajohsai lament on their loss, but vow to beat Karasuno the following year. Oikawa bumps into Ushijima, in which the latter tells him that he had chosen the wrong path, but the former tells him that there is no one team that can guarantee victory. Later on, Ushijima approaches Karasuno at the entrance of the gymnasium, and Hinata and Kageyama vow to beat Shiratorizawa to make it to the nationals.

Karasuno has won the match against Aobajohsai. The teams' line-up to thank one another for the game. After shaking hands with the referee's, Daichi recalls how it seemed like Oikawa was able to tell where Hinata's last spike was being aimed and how he had tried to position himself to receive. Had the blockers not changed the trajectory of the ball, there was the possibility Oikawa would have been able to receive.

Moments later, Coach Irihata is speaking to the team of the feelings they are surely experiencing and that the pain of defeat will not easily be forgotten. Despite this, he tells them they played a great game and immediately many of the players begin to cry. Shortly after, the players begin to line up to thank their supporters and Iwaizumi stops and begins to scold himself for not being able to make his last spike count; saying that he should not be able to call himself the ace. Oikawa walks by and pats Iwaizumi on the back followed by Hanamaki and Matsukawa. After collecting himself, Iwaizumi joins the rest of the team to thank those who had come to support them.

The Karasuno team huddle together until Hinata and Nishinoya throw themselves into the team and knock everyone down. The two laugh it off despite being yelled at by Tanaka and Kageyama and none of them notice Yahaba, Watari and Kyōtani observing them and promising revenge.

Later, Kunimi finds Kindaichi in the restroom to inform him the team is about to leave. The two are walking down a hall when they run into Kageyama. Kindaichi immediately refuses to look at Kageyama and they remain silent as he tries to walk by. Just when Kageyama walks past the two, Kindaichi calls out to him but is unable to speak again. Kunimi steps forward and warns Kageyama that things will different the next time they face each other. Kageyama acknowledges their promise and the two leave.

Kageyama rejoins his team outside of the gym in time for Yachi, Saeko, Shimada and Takinoue to find them and praise them for their victory. Tanaka is embarrassed by his sister being his biggest fan and Yamaguchi is complimented on his serves by Shimada.

Takeda reveals to Ukai that he felt nervous at the last play when Hinata was faced against the triple block. Ukai compares it to how Asahi had been faced with the iron wall from Date Tech and also assumes that Kageyama had believed that giving Hinata the last hit was their best chance at success.

Yachi tells Hinata how impressed she is that he had been able to get through the final block but Hinata reveals that he noticed Oikawa had reacted to what he was doing and had attempted to save the receive.

In another part of the building, Oikawa is looking for any remaining team members that have not gone to their bus when he runs into Ushijima. Though he tries to walk by, Ushijima says he has something to tell Oikawa. Ushijima informs Oikawa that he became lost in the heat of the moment and it reflected in his performance. He goes on to tell Oikawa that he did not use his skills to his full potential and only has his pride to blame. Oikawa remarks how Ushijima believes he should have done things differently by having gone to Shiratorizawa Academy instead of Aobajohsai but adds that there is no team that is guaranteed victory. Although Ushijima agrees on this he does say that his team does have a greater advantage when it comes to strength, skill and experience.

Oikawa is momentarily stunned by Ushijima's claim and says that he is the one who is basing his confidence on worthless pride. He states that he has never regretted his choice of going to Aobajohsai and warns Ushijima that he will now need to be cautious of Kageyama as he is a great threat now that he is no longer playing alone.

Outside the building, Hinata and Kageyama stare at a poster that announces the final round match of Karasuno vs Shiratorizawa and Hinata declares he will show Ushijima how strong Karasuno is.

On the way back to the school, everyone has fallen asleep; leaving Ukai and Takeda to go over how much the players have grown during the year. Ukai credits Takeda with some of that as he had worked so hard to rebuild ties with Nekoma which led to Karasuno being invited to the summer training camp to play against and build relationships with other powerhouse schools. Takeda is embarrassed at first but then states that Ukai can shower him with praise when they beat Shiratorizawa.

Now back at the school, Ukai announces for the team to head to the gym for their meeting. On their way, they meet Yui Michimiya, Mao Aihara and Chizuru Sasaki. The girls congratulate the team on their win and making it to the finals. Michimiya quickly notices the bruise on Daichi's face but Daichi assures her he is alright. At that moment, many students and teachers from inside the school welcome back the team and congratulate their win while announcing their support for the next game.

Michimiya then remembers that the sports new channel will be on soon. The team gathers together to watch the broadcast that announces Karasuno had defeated Seijoh who had been heavily favored to win. Tanaka and Nishinoya become annoyed that Oikawa and Seijoh are being shown more than they are but quickly disregard that when the news mentions Shiratorizawa's victory and making it to the final round after beating their opponent in straight sets.

Later that evening, the team is in the gym and listen to how Ukai goes over how they will be facing Shiratorizawa. He points out how strong the team is when he states that in the entire time that Oikawa has been at Aobajohsai they have never won against Shiratorizawa, thus making Shiratorizawa the absolute champions. The members of the team are top-level players with Ushijima just being the beginning.

Hinata declares that none of that should matter and is scolded by Daichi believing he is back talking to Ukai. Ukai allows Hinata to speak and he goes on to say that despite everyone having believed they would not win against Seijoh they did so anyway and they should not worry about what others think concerning whether or not they will win against Shiratorizawa. Ukai muses how the team will once again be looked at as the underdogs of the match but declare they should show everyone how tough they really are. Takeda adds that after being called the 'Wingless Crows' for so long, no one can call them this anymore and he believes the team can go farther than they ever have before.

Ukai and Daichi dismiss the meeting and have the team head home to rest for the next day. Before leaving, Hinata asks Kageyama to set for him and the two are soon discovered in the gym by Yachi. Though she advises them they should rest, Hinata admits he's still too excited to just return home to rest and he and Kageyama ask for her to toss for them. Though reluctant, she agrees and they begin to practice.

After several spikes, Hinata notices Yachi is distracted and she admits that she felt uneasy with them practicing again after how they ended up fighting last time she tossed for them. Though they seem to have forgotten, they apologize for having scared Yachi but she quickly assures them that she is fine and goes on to say that if she had not decided to become the manager she would have missed out on so many things the team has gone through and credits Hinata and Kageyama as being part of that. Hinata, in turn, thanks Yachi for all she has done for them and says that he and Kageyama may not have been able to master their new quick attack without her help. Hinata encourages Kageyama to show his appreciation to Yachi and after a simple 'thanks' Hinata believes he was not being appreciative enough. Yachi right away becomes fearful they will fight again but Kiyoko appears and interrupts.

She right away notices how they have been practicing and advises them to call it a night so they can get proper rest for their next match. Hinata and Kageyama reluctantly agree and begin to clean up while Yachi explains to Kiyoko how she was helping them practice and keep them company. Kiyoko rephrases Yachi's statement of how she was not helping them practice but instead was practicing with them. She then offers to walk with Yachi to the bus stop and tells Hinata and Kageyama they should head straight home when they are done.

When Hinata and Kageyama are leaving, Hinata wonders how the Small Giant felt the night before the finals and admits that he's nervous about facing Shiratorizawa. Despite that, he also admits that he's excited about going against Ushijima. Kageyama states that they will win tomorrow and the two fist bump.

The after-credits show Karasuno arriving for the match and Ushijima waiting for them outside the building. Hinata and Kageyama step forward and vow they will be the victors and make it to nationals. Ushijima accepts their challenge and heads inside to prepare for the match. Hinata becomes more excited to play and the team head in to face Shiratorizawa.

Retrieved from "https://haikyuu.fandom.com/wiki/Declaration_of_War_(Episode)?oldid=95669"
Community content is available under CC-BY-SA unless otherwise noted.