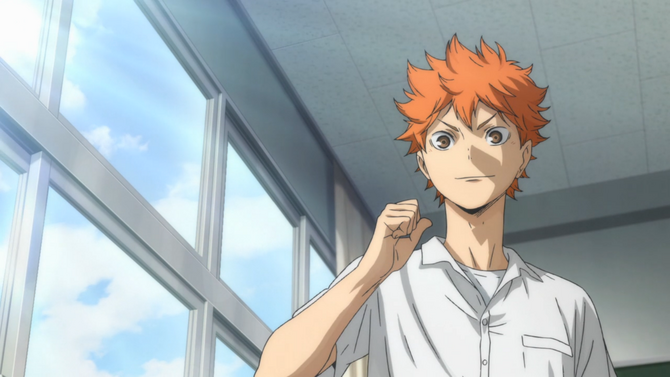 "Direct Sunlight" (Japanese: , Chokusha Nikkō) is the second episode of Haikyū!! Second Season, based on the manga Haikyū!! by Haruichi Furudate. The episode premiered on October 11, 2015.

Hinata, Kageyama, Nishinoya, and Tanaka are devastated by the possibility of not going to Tokyō if they fail any of their exams. Daichi vows that the entire team will go and thus forces the four to study, though it proves to be much of a challenge. The second-years study at Tanaka's place. Kageyama and Hinata are having a harder time, however, with Tsukishima reluctant to spend much time tutoring them. Luckily, Hitoka Yachi, the possible new manager, proves to be a great help at teaching the duo.

Hinata, Kageyama, Nishinoya, and Tanaka are devastated by the possibility of not going to Tokyō if they fail any of their exams. Hinata resorts to asking Coach Ukai for help, only being told that he himself wasn't someone who got good grades. Feeling defeated, Hinata falls to the floor in shock and Sugawara tries to reassure him that he could pass. Hinata then replies that he had never gotten a double-digit score in any of his quizzes, which shock the third-year. Tanaka and Nishinoya are then shown with bodhisattva faces, which causes Sugawara to scold them. Watching the four break down and create chaos, Daichi vows that the entire team will go and thus forces them to study, though it proves to be much of a challenge.

In the club room, Daichi makes the four promise him to not fall asleep in class amongst other things. Sugawara adds that they should be fine since they had passed their high school entrance exam, but proceeds to tell them that if any of them fall asleep in class there would be consequences. Hinata recognizes that Tsukishima could help them and whispers in Kageyama's ear about his plans.

Whilst walking back home, Yamaguchi chats with Tsukishima about Kageyama's and Hinata's school grades, stating that he didn't expect Kageyama's to be that bad. Tsukishima replies that all that's in the starter setter's head is volleyball, so he wasn't very surprised. The two are startled by Hinata, who asks Tsukishima to help them study. Tsukishima initially refuses but agrees later on when Kageyama reluctantly asks (or rather shouts) for help as well. The four are scolded by Coach Ukai for their volume, which would certainly disturb the neighbors.

Kiyoko is still searching for a new manager to replace her when she graduates, and Hinata suggests someone in his year who was not attending any club activities at the moment. He converses with the manager that it must be a hard role to fill, and he would do anything as a first-year to help out. She thanks him but says that he should focus on studying and practicing.

Tsukishima and Yamaguchi help Kageyama and Hinata in the club room, as Sugawara teaches Nishinoya. They look at one of Hinata's answers to a question, and Tsukishima mocks him for being a simpleton to answer in that particular way. He then goes on to lecture Kageyama to learn the English words, with the latter stating somewhat aggressively that Japanese people can't understand English. Daichi shows up behind the first-years, and gets Kageyama to state out the names of the hand gestures he strikes. Astounded by how quickly he could recite them, the captain asks how long it took him to memorize. Kageyama replies with less than a day, which Daichi then states that he was not going to let him say that he couldn't memorize those words. Hinata finds the need to not lose to him or the second-years in terms of studying.

The second-years study at Tanaka's place. Ennoshita reprimands Nishinoya's answer to one of the questions, stating that the answer to the question could be found in the passage and that he shouldn't ignore both the question and Norio (the person in which the passage is based on). Ennoshita tries to find other aspects of Nishinoya which could help with the studying, and only gets the reply from Nishinoya to "Leave the memes to him". Tanaka's sister, Saeko, shows up, surprised to find them studying. She offers to help, but Tanaka states that she is probably just as dumb as he is. During their little argument, the other second-years marvel at how cool his sister is.

Kenma receives a text from Hinata, who wishes Nekoma and him good luck on the Interhigh preliminaries. Hinata's sister, Natsu, comes into her brother's room, asking him to join her in jump rope. Hinata's mother calls from somewhere in the house that he is busy studying. Hinata replies to Kenma's text and is pumped to go to Tokyo.

In the teacher's office, Takeda overhears the effort that is being put by the four (mainly Nishinoya and Tanaka) to pay attention in class. Takeda thinks now that the Tokyo away games are becoming a reality.

Kiyoko is able to find a possible candidate for the manager position, Yachi. Yachi is nervous meeting the volleyball club, especially with Asahi's appearance that makes him look much older and Nishinoya and Tanaka's blatant staring. Only being present to introduce herself, Yachi soon leaves the gym, freaking out about the tallboys and any possible fans of Kiyoko's that could kill her. Seeing Coach Ukai was the last straw, as his appearance made her run away screaming for him to not kill her. The volleyball club later expresses their gratitude for Kiyoko's hard work.

Kageyama and Hinata are having a harder time, however, with Tsukishima reluctant to spend much time tutoring them. They ask for his help during lunchtime, as their teacher had left. Yamaguchi spots the two, and suggests that Yachi could help them out, since she is also in one of the advanced classes. After hearing about Tsukishima's reluctance to teach them during lunch, she willingly helps them out. She is surprised about Hinata's seriousness to attend the Tokyo practice matches. Hinata then goes on to explain to Yachi about the teams and players they had interacted with so far. She mistakes him for being a manager, for his short height, and the latter tells her that despite being short, he is a regular on the team.

Yachi shows up for volleyball practice again, and gains a better understanding of their passion for volleyball. Kiyoko informs her about Karasuno and their achievements. Takeda accepts Ouginishi's practice match, and the club gets pumped.

Retrieved from "https://haikyuu.fandom.com/wiki/Direct_Sunlight_(Episode)?oldid=95251"
Community content is available under CC-BY-SA unless otherwise noted.