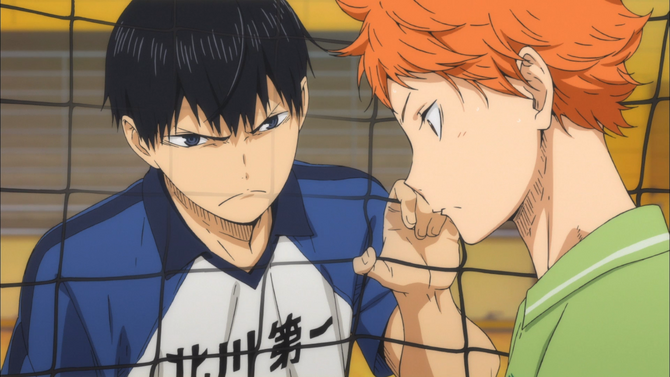 "Endings and Beginnings" (Japanese: わりとまり, Owari to Hajimari) is the first episode of the Haikyū!! series, written and illustrated by Haruichi Furudate and published in the manga magazine, Weekly Shōnen Jump. The episode premiered on April 6, 2014, premiered on the Bandai Channel on April 20, 2014, and Animax on May 26, 2014.

Hinata is inspired by the Small Giant playing volleyball on TV. Three years later, Hinata goes to his first-ever volleyball tournament and his team is set to play against Kitagawa Daiichi, the school of Kageyama Tobio, also known as the King of the Court. Their match against each other leaves them both interested in their skills and sparks a rivalry. However, they meet again next year, but this time as teammates in their new high school: Karasuno High.

Hinata is standing on an empty court. There is a tall wall of blockers looming over him, and he wonders what the view is on the other side. He knows that he can’t do anything on his own but if he’s not alone, he can see the view. His teammates then line up next to him and their match begins. In the present, Hinata stops by an electronic store and watches a volleyball game on TV. He is awed by Karasuno High’s “Small Giant”, a player of short stature who can jump extraordinarily high. A bystander points out that Karasuno is from the next town over, then says that he's impressed. Three years later, Hinata is at his very first volleyball tournament. He thanks his friends and teammates for helping him make it to this point. Hinata is confident that they will win but his teammates are skeptical. However, Hinata soon realizes that the opponent, Kitagawa Daiichi, is a powerhouse school with members twice his size. Despite this, his desire to win doesn't falter, but he does get nervous and has to go to the bathroom.

At the bathroom, Hinata overhears some Kitagawa Daiichi players talking about his team's weaknesses and lashes out at them though that leads to more ridicule. However, another Kitagawa Daiichi player – Kageyama – arrives and chases them away. Kageyama then turns on Hinata and criticizes him, but Hinata replies that he’s not tall but he can jump, and as long as he doesn’t give up, he can win. Hinata explains how he finally got his team into a tournament so he has to win all of his games. Kageyama counters that he will win all the matches before walking away.

During the warmups, Izumi and Koji talk about how good Kageyama, the "King of the Court", is as a setter. On Kitagawa Daiichi’s side, Kageyama insults a spiker for being too slow. The coach comes over and tells Kageyama that he shouldn’t focus only on speed. The game starts but Yukigaoka does badly and before long, Kitagawa Daiichi is ahead. In a flashback, Hinata finds out from a teacher that he’s the only member of the boys’ volleyball club. The teacher explains that the club isn't really a team but is a fan club instead and suggests Hinata change clubs or join the girls’ volleyball club. Hinata replies that he'll be a one-man team and eventually, become someone like the "Little Giant". Hinata then starts practicing relentlessly no matter where he is and even asks his friends to help, though most of them turn him down. One day, Koji asks him why he bothers to practice if he can't even enter a tournament, and Hinata replies that he'll enter one eventually.

Back in the present, Izumi tosses to Hinata but his aim is off. However, Hinata quickly runs to the ball and jumps incredibly high, shocking Kageyama. Unfortunately, Hinata’s spike gets blocked. As the game progresses, Yukigaoka scores several times due to mistakes made by Kitagawa Daiichi, but Kitagawa Daiichi still has an overwhelming advantage over Yukigaoka; despite this, Kageyama still takes the game seriously and insults his teammates whenever they get lazy. Izumi tosses to Hinata but commits a toss miss. However, Hinata quickly reacts and runs towards the ball on the other side of the court and spikes, but it is out. In the end, Kitagawa Daiichi wins.

The two teams get ready to line up. Kageyama asks Hinata brusquely what he had been doing for three years because his skills are amazing but he doesn’t fully use them; Hinata doesn’t reply. In the bleachers, some Karasuno players comment on Kageyama being a threat when he goes to high school. As they are leaving, Koji tries to comfort Hinata by saying that he already expected them to lose to Kitagawa Daiichi. Hinata says that no matter how strong or weak the opponents are, in the end, it’s about whether you win or lose. Then, he spots Kageyama and runs to him, shouting that if he is the King that rules the court, Hinata needs to defeat him and be the last one standing. Kageyama replies that the last ones standing are the victors who are the strongest. If Hinata wants to be the last one standing, then he needs to be strong. After that, Kageyama leaves.

For the rest of his third year, Hinata runs daily and even practices with the girls’ and moms’ teams. Kitagawa Daiichi is eventually defeated in the Prefectural Tournament. Soon, Hinata graduates and enrolls in Karasuno High. On the first day, Hinata runs towards the gym happily. However, when he enters the gym, he sees Kageyama there.

Retrieved from "https://haikyuu.fandom.com/wiki/Endings_and_Beginnings_(Episode)?oldid=95114"
Community content is available under CC-BY-SA unless otherwise noted.