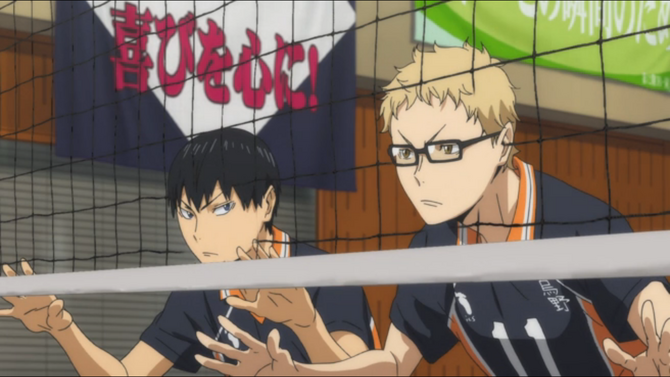 Evolution (Japanese: , Shinka) is the twenty second episode of the Haikyū!! series, written and illustrated by Haruichi Furudate and published in the manga magazine, Weekly Shōnen Jump. The episode premiered on August 31, 2014.

After being subbed back in, Kageyama attempts to communicate with each of his teammates and learns how to accommodate the different attackers. He and Tsukishima manage to sync with each other and become an unstoppable force. Oikawa watches this revel and remembers his bitterness and jealousy towards Kageyama from junior high and his goals to defeat Ushijima. He's not backing down and wants to defeat Karasuno more than ever.

Kageyama heads back onto the court and stands before his teammates. He thinks back to how Sugawara interacts with them and copies the third year, smiling in an attempt to put them at ease. This has the opposite effect, scaring both his teammates instead, though Daichi realizes the first year’s true intent. Kageyama then faces Hinata and states that they’re going to win this.

At the sidelines, Sugawara sighs in relief and explains that he was really nervous during the match. He notes that he never got to play much since last year’s third years played during all the matches so Kageyama probably has been on the court much more than he has. Tsukishima adds that despite that, Kageyama still looks more anxious than Sugawara does.

On the court, Kageyama gets ready to serve. His teammates notice that he looks happy and Sugawara states that this puts him at ease, seeing a genius setter acting the same way as everyone else while on the court. Kageyama holds the ball and goes into full concentration, intimidating Oikawa, who quickly tells his teammates to stop the first year. Kageyama serves right at Aobajohsai’s libero, but still scores. He then gives Tanaka a high five, shocking Kindaichi and Kunimi.

Kageyama’s serve is stopped the second time and the ball is sent back to Karasuno. Hinata and Kageyama get ready to attack and Kindaichi and Hanamaki wait for their usual signals. However, Hinata stays silent, using Sugawara’s signals instead, and scores off of the opponents’ lack of reaction. Kageyama tries to compliment Hinata afterwards, but comes off sounding too stiff.

The match continues and Aobajohsai doesn’t appear to be affected by Kageyama’s comeback. Irihata watches and notices that Kageyama has regained his momentum and while he only cared about the opposing blockers before, he seems to show more concern about his own teammates now. In addition, with Sugawara’s secret signals, Kageyama and Hinata are unstoppable.

Suddenly, Tsukishima’s switched in. Aobajohsai calls a quick timeout and Oikawa note that Kageyama and Tsukishima probably don’t get along. At Karasuno’s side, Sugawara advices Kageyama to try communicating with Tsukishima since the two don’t seem to sync properly on the court. Karasuno calls a timeout as the spectators comment on Karasuno’s lower attack power without Hinata.

Kageyama calls Tsukishima and asks him for the type of toss he wants. Tsukishima insults Kageyama initially, but replies that he wants consistent tosses. To his surprise, Kageyama agrees calmly. The match resumes and Kageyama gets into position. He sends Tsukishima a softer toss, which Tsukishima pulls a feint off of.

Aobajohsai and Karasuno chase each other evenly and Kageyama and Tsukishima’s teamwork improve drastically. He sends Tsukishima a toss and Watari is tricked into thinking that it’s another feint. At the last second, Tsukishima turns it into a spike and scores. Karasuno soon reaches twenty-four points, but it becomes Oikawa’s turn to serve.

In a flashback, Oikawa received the best setter award. He had always had better athletic ability than others and only got better in junior high. However, there were walls he couldn’t overcome, namely Ushijima Wakatoshi. Kitagawa Daiichi could never even get one set off of Shiratorizawa until Oikawa’s third year. The genius Kageyama joined the team and Oikawa became jealous, knowing that Kageyama would beat him one day. From then on, Oikawa practiced much more daily and this anxiety showed in a match. Oikawa was subbed out for Kageyama in that match, deepening the bitterness the third year held for the underclassman.

Oikawa finally snapped during practice, when Kageyama asked him for advice. Oikawa reached to hit Kageyama before Iwaizumi stopped him. Iwaizumi then yelled at him to calm down, but Oikawa retorted that he needed to win and beat Shiratorizawa. He needed to get to nationals. Hearing this, Iwaizumi angrily head-butted Oikawa, yelling that Oikawa wasn’t fighting by himself. There was no way Oikawa can defeat Shiratorizawa by himself; however, with six players on the court, they would be able to win.

After that, Oikawa recovered, but showed his hostility towards Kageyama more openly. At the next tournament, Oikawa and Iwaizumi’s last one of junior high, they ended up second to Shiratorizawa and Oikawa received his award. The two third years vowed to defeat Shiratorizawa in high school. Oikawa then turned to Kageyama and announced that he was going to crush him when the time comes.

In the present, Oikawa gets ready to serve. Iwaizumi reminds him to focus on the opponent in front of him and Oikawa serves powerfully. Nishinoya receives it and the ball goes back to Aobajohsai. Tsukishima watches the players, thinking to himself that Aobajohsai will most likely go for a quick in the center. Before he can move, Kageyama grabs the back of his shirt. In this stage, when Aobajohsai’s being pushed into a corner, Oikawa will most likely toss to Iwaizumi. Following this assumption, Kageyama and Tsukishima block the ace, winning the set for Karasuno.

However, Oikawa’s not too worried about the win. He realizes that Kageyama knew what he was going to do and wonders if Sugawara told him. Grinning excitedly, Oikawa remarks that he’s angry, but he wants to win the final set more than anything.

Retrieved from "https://haikyuu.fandom.com/wiki/Evolution_(Episode)?oldid=70512"
Community content is available under CC-BY-SA unless otherwise noted.