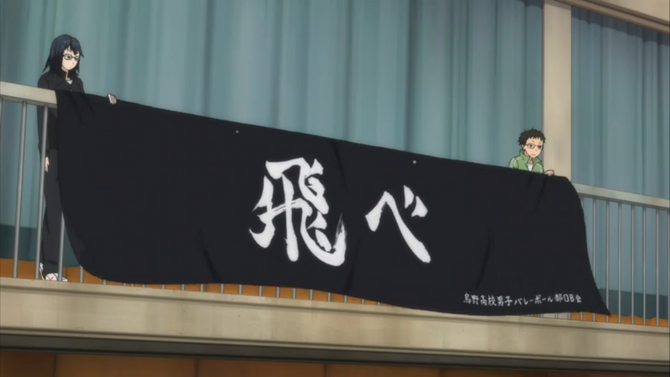 Powerful Opponents (Japanese: たち, Kyōteki-tachi) is the fourteenth episode of the Haikyū!! series, written and illustrated by Haruichi Furudate and published in the manga magazine, Weekly Shōnen Jump. The episode premiered on July 6, 2014.

The bracket for the Interhigh is announced. Karasuno has its final practices and works on back-end spikes and signals. Yamaguchi secretly seeks out Shimada's help with the jump float serve so he won't be the only first year without an ability to contribute to the team. As the Interhigh approaches, Hinata remembers that around this time last year, Yukigaoka'd lost to Kitagawa Daiichi. Determined, Hinata vows to win at the Interhigh, and eventually beat Kageyama.

At Tokonami High, Ikejiri announces the pairings for the Interhigh preliminaries to his teammates. They discover that they’re up against Karasuno, otherwise known as the “Fallen Rivals” or “Unflying Crows”. Haga and Tamagawa get excited at the prospect of Karasuno being slackers, thinking that they’ll finally be able to get past the first round. The captain interrupts them and reminds them to train first.

As the players begin jogging, Ikejiri remarks to Chaya that he knows someone at Karasuno. He reveals that his friend joined Karasuno after seeing it perform at the Spring High on TV and because it’s close to his home. As Ikejiri wonders how his friend’s doing at the moment, the scene cuts to Daichi.

At Karasuno, the players are busy practicing for the Interhigh. Hinata messes up and apologizes as Ukai yells at everyone to think of each ball as the final one and use their full abilities. In a flashback, Ukai and Takeda go over the Interhigh and remind the players that if they lose one match, everything’s over. He tells them that if they’re going to get revenge on Nekoma, they have to win.

In the present, Hinata finally receives the ball as he thinks of fighting Nekoma again. At the end of practice, Tanaka’s showing a magazine to Nishinoya, Asahi and Sugawara. Hinata and Kageyama come over to see what the commotion’s about and sees an article on Ushijima, one of the country’s top three players and the number-one ace of Miyagi Prefecture. Daichi comes over and remarks that he certainly looks like an ace before turning to Asahi, with the rest copying him. Unnerved, Asahi backs away to a corner of the gym.

As Hinata’s thinking that they would have to get past Ushijima to get to Nekoma, Ukai comes over and reminds them that Ushijima isn’t the only threat. He lists the top four schools to look out for this year: Wakutani Minami, Date Tech, Aobajohsai and Shiratorizawa. As he sees the players’ incensed gazes, he tells them to keep looking straight ahead so they would never lose their footing. There’s no team that enters the tournament to lose so they should never underestimate anyone. As he finishes, he tells the players to end their reputation as “flightless crows”.

Just then, Takeda runs in and presents the match-ups for the Interhigh. If Karasuno and Date Tech both win their matches, they may end up competing against each other, but that’s not the only problem. Aobajohsai is also in Karasuno’s block so they might end up facing off.

As Daichi stares at the line-ups, he thinks back to a time during junior high when he was walking with Ikejiri in the hallway. They’re discussing their high schools and after finding out that they’ll go to different schools, they joke that they’re going to defeat each other. Elsewhere, at Tokonami, Ikejiri thinks of Daichi as well.

The next day, Daichi’s approached by Michimiya, who hands him the pep rally schedule. He asks her about the girls’ side and she admits sheepishly that they haven’t been keeping up with practices because she’s a bad captain. She states that they’ll probably lose in the first match and Daichi reminds her of her past confidence. He tells her that if she doesn’t believe that she’ll win, she never will.

All the members are thinking of previous rivals and losses. Outside, Kageyama thinks of Oikawa’s challenge from the practice match. In his class, Asahi remembers the match against Date Tech in which he was completely blocked. Nishinoya suddenly interrupts him and drags him off to practice. Asahi says that he’s not going to run away from practice anymore. This time, he’ll play proudly and confidently declare that he’s Karasuno’s ace. Outside the gym, Sugawara approaches Hinata with signals he came up with. Hinata happily announces that he’ll spike any toss. Elsewhere, Ukai thinks back to the match against Nekoma and looks for techniques Karasuno can use.

As practice begins, Ukai calls Asahi over and asks him if he could do a back attack. After a quick explanation, the players get to practicing for the Interhigh. Takeda notices Ukai’s fatigue and asks him about it. Ukai replies that because he’s coaching now, he has to get up early in the morning for that shift. They observe the players, noticing some serious improvement, especially with Kageyama’s interactions with his teammates.

After practice, Daichi treats everyone to some pork buns, but they notice that Yamaguchi’s missing. At Shimada Mart, Yamaguchi approaches Shimada, who recognizes him. Without warning, Yamaguchi asks him to teach him the jump float serve. Shimada doubts that Yamaguchi would be able to learn it before the Interhigh and Yamaguchi admits that he probably won’t get to play anyway, but he doesn’t want to be the only first-year who has to sit out.

The day before the Interhigh, the players are finishing up practice. Suddenly, Takeda announces that Kiyoko has something for the team. The two climb up to the top of the gym and show off a Karasuno banner Kiyoko’d found. Shyly, she tells the players to do their best before running off. The shocked third and second years burst into tears and vow to win the first round.

The next day, Hinata heads to school, only to get outraced by Kageyama. As they reach the building, Kageyama breathlessly announces that he has won 31 times with 30 losses, but Hinata corrects that it’s actually 32 wins. Around this time, one year ago, Kitagawa Daiichi defeated Yukigaoka. Hinata announces that he’ll defeat Kageyama no matter what and how long it takes.

Retrieved from "https://haikyuu.fandom.com/wiki/Formidable_Opponents_(Episode)?oldid=95965"
Community content is available under CC-BY-SA unless otherwise noted.