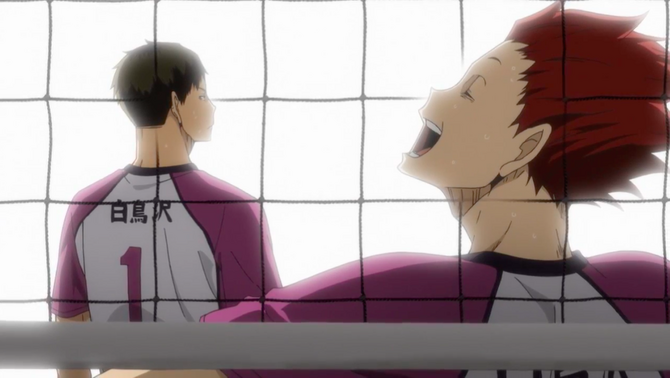 Karasuno is having trouble with blocking Ushijima, but before they could stop the left-handed ace, they have another problem to face - Satori Tendō, also known as the Guess Monster.

The score is now tied at 3-3 when Saeko overhears someone behind her call Tendō the 'Guess Monster'. She and Yachi are confused by this nickname, wondering if Tendō may be a cheater.

Reon delivers the next serve. Daichi receives but the ball is off. Tanaka sends the last hit to Kageyama. Tendō watches carefully and instructs Goshiki to jump straight. The two jump to block Kageyama and Tendō is able to move his arms quick enough to block when Kageyama tries to spike to his right.

Reon serves and Daichi again receives. Kageyama and Asahi glance at one another and this does not go unnoticed by Tendō who quickly positions himself to successfully block Hinata. Tendō relishes how great he is feeling. Saeko questions how Tendō is able to move the way he does and Shimada surmises that Tendō saw there were three possibilities of where the next attack would come from. The first possibility was whether or not Kageyama would do a setter dump as he is in the front, the next possibility would be using Hinata or Tanaka and the last was set to either Daichi or Asahi for a back attack. While on the court it is easy to get nervous and your body may not act the way you want but Tendō clearly is able to do this easily, making him a great threat.

As Karasuno calls a time-out, Goshiki praises Tendō on his correct guess; he himself had believed that Kageyama would set to Asahi because he too had noticed the glance they exchanged. Tendō explains that they were bluffing as a possible way to throw off the blockers. Shirabu adds that once Tendō learns an opponent's glances, footwork and handling, the opposing team will not stand a chance against him.

After Ukai advises to cut Shiratorizawa off at the next serve, Tanaka and Hinata notice Kageyama looking very upset. Though he denies he is, Kageyama admits to himself that he cannot stand it when a spike from his set is blocked. Takeda questions Tendō's method of blocking and Ukai explains that Tendō uses a type of blocking called Guess Blocking. Tendō relies on his reading and intuition to guess where the next attack will be coming from and position himself in time to block. Ukai informs the players that there will be times that Tendō's guesses are wrong but from what they have seen so far that is a rare occurrence. What makes him even more of a threat is that he has a body that can react fast enough to get these blocks and that the best way to get by a blocker like him is to think of his movements as not having regularity.

The time-out ends and the set continues with Reon serving once more. The ball hits the top of the net and Daichi is quick enough to receive. Despite the ball being short, Kageyama quickly positions himself to set as Tendō admires Kageyama's flawless coordination. He is so wrapped in his thoughts that he does not react in time when Hinata spikes the ball right over his head. Tendō calls Kageyama out on this, saying that Kageyama did this on purpose as a type of payback for Tendō's last block.

The set continues and at his next set, Kageyama disguises where he sends the ball and Tendō falls for this by going to the right but Kageyama had set to Daichi instead of Hinata. Yamagata receives but the ball heads back to Karasuno. As Nishinoya sets to Kageyama, Hinata runs to the far side of the court with Tendō chasing after him. Reaching the end of the court, Hinata is given the last hit and spikes. The spike bounces off Yamagata's arms and goes out. Tendō admires how Kageyama has been more successful than other setters at being able to hide his sets from him and how fast Hinata is, stating that if he is even one tempo too late he will not be able to catch up.

Kageyama delivers the next serve. Yamagata receives and Goshiki spikes past Hinata and Daichi. Asahi is able to save the ball and Hinata once again tries to lead Tendō to one side of the court. Though it appears that Tendō is following, he suddenly changes direction and runs to the opposite end in time to get a one-touch on Tanaka's spike. Ushijima is given the last hit and spikes past Hinata to score. Kageyama questions if Tendō pulled a fake or simply changed his mind on where to go.

Ukai explains to Takeda that Tendō is planning to stop the spikes with his blocks and using those to score his own points. But blocking is something that is typically not done alone and Karasuno is using their blocks to connect the ball. Once the timing can be perfected, blocks can be just as useful as spikes.

The next rally continues on until Ushijima lands a spike. Takeda comes to realize that attacks and blocks evolve and that different methods of attack and defense are learned through practice and understanding. Ukai is impressed at how much Takeda has come to learn of volleyball. While Takeda says that this is common to know, understanding all of this information will be their ally.

As Tsukishima rotates in, he is mocked by Tendō calling him the 'normal guy'. Tsukishima becomes annoyed at the jab but listens when Daichi advises him to just ignore it. Kawanishi serves and the ball falls short but Nishinoya digs it in time though it is sent back to Shiratorizawa. Tendō right away tries a time lag attack and is caught off guard when Tsukishima is able to block him with no problem and score for Karasuno. Tsukishima then introduces himself to Tendō and informs him that while the time lag attack worked on Hinata, it will not work on him. Tendō says that he was annoyed by Karasuno's first-years, to begin with, but Tsukishima has become his greatest annoyance; to which Tsukishima thanks him and annoys Tendō further.

In the next play, Tendō looks to go to attack but Tsukishima waits and jumps when he sees Ushijima is given the set. Despite perfect timing, Ushijima is still able to get by. Takeda silently pleads for Tsukishima to continue thinking and be Karasuno's understanding.

When the players change positions, Shirabu noticed Tsukishima had been staring at him. In the waiting area, Tadashi is certain that Karasuno will get their chance and begins to silently plead to Ukai to be put into the game. The game continues and Tsukishima continues to get one-touches on many of the spikes. Shirabu is becoming frustrated with Tsukishima being able to constantly do this. Tanaka delivers a spike that causes Goshiki and Yamagata to hesitate when they see the other attempt to receive and thus allowing the ball to land. This upsets the Shiratorizawa coach, Tanji Washijō, who promptly scolds Goshiki.

Hinata soon rotates in and Sugawara is subbed in for Tsukishima. Sugawara serves and the ball is received by Reon. Tendō spikes and Daichi is able to save it. At this, Sugawara and Kageyama switch positions and Karasuno executes a synchronized attack. The Shiratorizawa players right away become alarmed and Reon and Tendō are unable to block in time to stop Kageyama's spike. Washijō becomes irritated at seeing the attack, seeing that the same beliefs have carried from Ikkei Ukai to his grandson. Washijō confesses he never liked Ikkei or his methods of trying to build strength through new methods as he himself has always believed that being bigger and stronger is the only true strength there is. At that, Reon spikes and Sugawara fails to receive.

Ukai sees that Washijō is the same as he has always been. Always looking for tall and strong players to bring onto the team; saying that even if they were not originally accepted by the team, Washijō would still accept them if they fit his definition of 'powerful'. The players are then put through rigorous training in order to stay in top condition. Finding someone like Ushijima was surely a great stroke of luck for Washijō.

Ushijima deflects a spike off Kageyama's hand and scores. In the next rally, Goshiki hits a spike off Daichi's arm and scores as well; bringing Shiratorizawa to twenty points first. On Shiratorizawa's next turn, Shirabu serves and Nishinoya receives. Kageyama sets and Hinata spikes past Kawanishi and Goshiki.

Tadashi is subbed in for Hinata for Karasuno's next serve. With encouragement from Tsukishima, Tadashi does the jump float. Goshiki receives and Shiratorizawa's formation breaks. Yamagata sends the last hit to Ushijima. With Daichi, Tsukishima and Asahi trying to block, Ushijima still spikes through and ends Tadashi's serve. Tendō is highly amused at how Karasuno has been stopped just now but is still concerned about how persistent Tsukishima is. Ukai calls for a time-out. Ukai advises the team not to get caught up in the excitement of completely shutting down an attack or breaking through a block. He reminds them to be thinking of their next plays and focus on things like getting a one-touch or doing a rebound. Even if it does not result in immediate points, doing these things will start to show.

When the time-out ends and the players are making their way back onto the court, Tsukishima asks if he be permitted to set the timing for the three-person blocks. At the same time, Shirabu is reminded by Eita Semi to pass to Ushijima. Shirabu easily agrees though this seems to annoy Semi.

Goshiki serves and becomes annoyed seeing Daichi picking up the receive as he has done several times already. Asahi hits the ball against Ushijima's arm and scores. Daichi does the next serve. Goshiki receives and Shirabu sets to Ushijima though Tsukishima gets a one-touch on his spike and further frustrates Shirabu. Asahi sends the ball back over after Tanaka and Daichi send it to him. Yamagata receives and Reon spikes. With his spike landing and the rotation changing, Tendō is now in the front.

Tanaka receives Kawanishi's serve and Kageyama sets to Tsukishima. With Tendō jumping to block, Tsukishima does the feint over him. As Shirabu saves the ball, Reon realizes that the feint was purposely aimed to go to the center. He sets to Ushijima as Kageyama, Tsukishima and Asahi go to block.

As Ushijima is preparing to spike, Tsukishima sets the timing and signals when to jump. Faced with the triple block, Ushijima spikes a straight that directly leads to Nishinoya. The Karasuno libero receives and surprises many with his accomplishment of getting the ball back up. As Kageyama prepares to set, Tendō guesses where the ball with go and heads toward Karasuno's left only to be caught off guard when Kageyama sends the ball to Tsukishima who spikes past Reon and scores; bringing the score to a tie.

Retrieved from "https://haikyuu.fandom.com/wiki/GUESS-MONSTER_(Episode)?oldid=94463"
Community content is available under CC-BY-SA unless otherwise noted.