Gekijō-ban Haikyū!! Shōsha to Haisha (Japanese: 劇場版ハイキュー！！勝者と敗者, Gekijō ban haikyū ！！ Shōsha to haisha) is the second of a two-part compilation movies based on Haruichi Furudate's Haikyū!! series. The movie covers the second half of the first season of the manga's anime adaptation. It was shown in Japan theaters nationwide from September 18 to October 1, 2015.[1]

The first compilation movie, Gekijō-ban Haikyū!! Owari to Hajimari, had a limited nationwide Japan showing from July 3 to 16, 2015.

Karasuno High enters the Inter-High Volleyball Tournament and immediately proves to be the "fallen champions" and "flightless crows" no more. After their first match, Karasuno dukes it out against Date Tech High and their famous Iron Wall, which shut down every spikes of Karasuno's ace, Asahi, during a previous match. Karasuno, however, breaks through the powerhouse school's Iron Wall this time and proceeds to the Top 16 teams. The now back-in-the-skies Karasuno fights Aobajohsai High and seeks to have the same outcome as their first practice match. 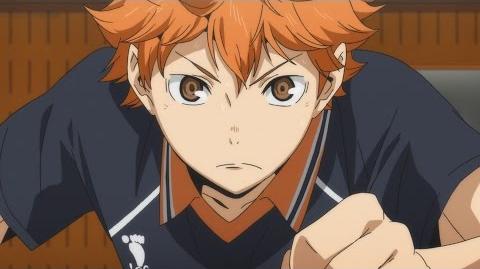 Retrieved from "https://haikyuu.fandom.com/wiki/Gekij%C5%8D-ban_Haiky%C5%AB!!_Sh%C5%8Dsha_to_Haisha?oldid=64362"
Community content is available under CC-BY-SA unless otherwise noted.