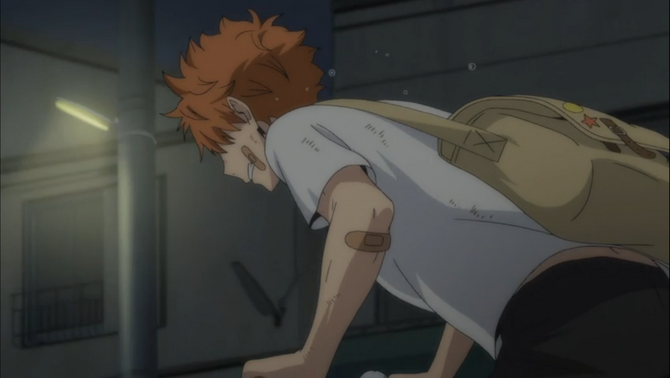 "Greed" (Japanese: , Yoku) is the fifth episode of Haikyū!! Second Season, based on the manga Haikyū!! by Haruichi Furudate. The episode premiered on November 1, 2015.

Hinata expresses how he wants to improve so that he would be capable of competing by himself, but Kageyama replies that in doing so he would break the team apart. Hinata interprets him as being unsupportive of his wishes, and they argue to the point they ignore each other. The team worry about the situation and hope that the two would reconcile soon.

The episode begins with Karasuno getting ready for a game against Nekoma and Ukai advising Hinata and Kageyama to do all they can in the game. Hinata looks over to Lev and remembers his vow to stop the quick attack.

A quick scene shows Saeko waking up and claiming it was a bad idea to go drinking with the faculty the previous night.

Karasuno and Nekoma are now playing against one another and Lev narrowly misses blocking Hinata doing the quick attack. During the next rally, Hinata tries the quick attack again but this time Lev succeeds in blocking him. Karasuno is surprised by this though Ukai points out that Nekoma has been skilled at being able to handle the quick attack and now have a tall, fast middle blocker who may complicate Karasuno's attacks.

While getting ready for the next rally, Lev 'challenges' Hinata. Kageyama suggests that they switch to normal quick attacks and notices that Hinata isn't fully paying attention. Kenma calls Lev over, informing him that he believes Karasuno will switch their quick attacks and Lev should start read blocking.

Karasuno receives the ball and Lev prepares to jump when he sees Hinata looking like he will spike but stops and remembers what Kenma explained about read blocking. After seeing where the ball is set, Lev is able to get a one-touch on Asahi's spike. This shocks the Karasuno team as it looked like Hinata had been able to trick Lev into following him. Yaku sends the ball to Kenma who then sets the ball to Lev. Lev is able to easily spike the ball past Hinata and score; further frustrating the Karasuno players.

Karasuno takes a time-out and Ukai advised that Asahi and Tanaka should focus more on attacking but quietly wonders if this is the correct way to play against Nekoma. Coach Nekomata watches Karasuno and believes they will not be able to grow stronger if they continue to rely on defense.

Hinata begins to feel new emotions as he thinks about Lev, Nekoma, and other strong players. He claims to himself that he must become stronger in order to defeat them.

The game continues with Karasuno receiving the ball and the last hit being sent to Asahi. But everyone is shocked to see Hinata go after the ball and this results in the two colliding. Asahi is initially horrified of knocking Hinata down but Hinata quickly recovers and repeatedly apologizes to Asahi; claiming he wasn't paying attention. Hinata is then yelled at by Ukai and Kageyama but it becomes apparent to Ukai and Asahi that Hinata tried to take the ball 'meant for the ace'.

Coach Nekomata, having seen the collision, begins to wonder if the team will now begin to seek change (evolution). Hinata then walks over to Kageyama and states that he now wishes to do the quick attack with his eyes open. The entire team is shocked at hearing Hinata's declaration and that the quick attack isn't working anymore. Kageyama, not understanding why Hinata wants to change the attack, says he will not set to Hinata for the rest of the game claiming he will not set to someone he knows will miss.

Yachi and Kiyoko notice the new tension between the players from the collision and Hinata and Kageyama's argument. The team loses and, while doing the penalty lap, Daichi silently agrees with Hinata's earlier words of how they cannot keep doing the same thing and Asahi feels Hinata's desire to improve could become a threat.

When the team gathers around for a briefing, Takeda bluntly claims them to be the weakest of the present teams. This does not sit well with the players at first but then Takeda questions if they see the other teams just as rivals or sources for them to learn from. This seems to change the team's mind when Takeda points out that they have room to grow.

Afterwards, Sugawara heads outside with Kageyama and Hinata to further discuss Hinata's request to change the quick attack. While Sugawara suggests they can at least try it out, Kageyama still does not want to change it. Hinata remembers the game against Seijoh, saying that because his eyes were shut he did not see what was happening and the ball was already hitting the ground before he could do anything. Although he understands Hinata's feelings, Kageyama continues to say that the quick attack is Hinata's most powerful weapon and that changing it could result in failure. He leaves and Sugawara then says he has to agree with Kageyama in not wanting to change anything and that they should focus on improving other attacks.

Ukai then appears and agrees with Sugawara, pointing out that what Hinata is suggesting is something that may not be possible. Hinata explains that when he is doing well everything seems like it's in 'slow motion'. Ukai, not quite believing, questions if it 'seemed' like Hinata was able to see the things he has in slow motion but quickly realizes Hinata is being serious when he looks in his eyes. Karasuno is about to start a new game against Fukurōdani when Ukai tells Narita to go in for Hinata in an attempt to give Hinata time to cool off.

The team prepares to leave for home after Coach Nekomata reminds Ukai and Takeda that they are invited to the week-long training camp in two weeks. Lev is present to bid farewell to Hinata and says he can't wait to beat him again. Hinata proudly vows that he will prove Lev wrong.

Kageyama notices how Hinata is focused on the ball and throwing off his jumps in the process. After missing every set, Hinata asks for another set but Kageyama heatedly points out that they should work on improving in other areas instead of an attack that may not work.

Hinata argues that without the improved attack he will not get stronger. Kageyama points out that the next tournament is less than a month away and there is no time to perfect the kind of attack that Hinata wants. Hinata continues to want to be able to fight on his own and Kageyama throws Hinata to the floor saying that his selfish request will tear the team apart. The two begin to fight and Yachi runs off to find help. As they fight, Hinata continues to tell Kageyama that, even though he had perfect sets, he was not able to land hits against Seijoh and Nekoma and that this limited attack will not allow him to stand his ground when faced against the stronger opponents. Tanaka appears and quickly stops their fight.

Later, Hinata walks Yachi to her bus stop and apologizes for what she witnessed. He also explains that during his only tournament in middle school, Kageyama defeated him and Hinata vowed to get stronger in order to get revenge but that changed when they ended up being on the same team in high school. Though it was challenging at first because of Kageyama's harsh attitude, Hinata began to understand Kageyama better and see him as someone who was not just a partner but also a friend. Hinata then rides off while crying.

The next day, Tanaka is explaining to the third years what happened between Hinata and Kageyama. Although concerned, Daichi points out that Hinata and Kageyama fighting is nothing new and Tanaka remembers that they had been that way even before joining the team. Sugawara explains to Asahi how Hinata and Kageyama were when they first tried to join the club and Daichi advises that they should give the two time to work things out.

At his store, Ukai starts thinking about Hinata's quick attack and what he said about seeing the view from the summit. Remembering what Hinata said about being able to see in slow motion, Ukai begins to think he is one of the rare spikers that can see in this manner when playing at their best.

He then begins to think about a way that Kageyama can send a set in which Hinata is able to control the ball. He stops short thinking such a thing is impossible but then realizes that, if it could be done, then Hinata would become a great mid-air attacker. Even surpassing the Small Giant.

The episode ends when Hinata enters the store and asks Ukai how he should train.

Retrieved from "https://haikyuu.fandom.com/wiki/Greed_(Episode)?oldid=95430"
Community content is available under CC-BY-SA unless otherwise noted.