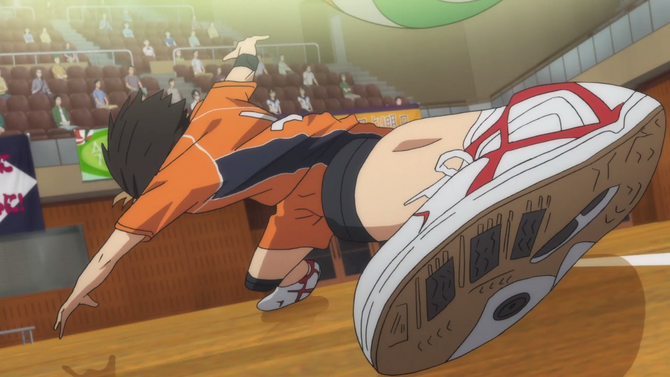 Guarding Your Back (Japanese: のり, Senaka no Mamori) is the eighteenth episode of the Haikyū!! series, written and illustrated by Haruichi Furudate and published in the manga magazine, Weekly Shōnen Jump. The episode premiered on August 3, 2014.

Karasuno manages to gain momentum in set 1 and steals the game 25-21. For set two they perform a double rotation to get Hinata away from the Giant #7. While this frees up Hinata for more quick attacks, it also means the matches result will rely heavily on Asahi's ability to blast through the Iron Wall as he faces #7.

When Hinata becomes the vanguard upfront, Karasuno is able to slowly increase their lead. However, Hinata rotates to the back with the score 24-22. Should they go to a third game, Karasuno knows they will be at a disadvantage. It all relies on Asahi's skills to get past the wall. As the match ends and Karasuno is leaving the gym, they look over to see Aobajōsai is up 24-13 in their 1st round match first set.

Tanaka scores, bringing Karasuno closer to match point. Hinata also starts getting better at his blocks and is able to one-touch Aone. Date Tech is still wary of Hinata even though he and Kageyama haven’t used the quick strike in a while and puts two blockers against the first year.

Karasuno soon wins the first set when Sakunami messes up his receive, surprising the onlookers. However, Karasuno may not be able to do as well in the second set as Aone is getting used to the quick strikes. Ukai gathers the players around and changes the tactic for the next set, telling the players that they need to take the attention off Hinata. As a result, the other players would get more attention. Asahi confidently remarks that he’s fine with that because as the ace, he needs to do his part too. They can’t let Hinata take the entire burden.

Hinata turns to Asahi and says that he can’t back attack like the third year can, but he’ll try to score as much as he can while upfront. He’ll be the best decoy. Asahi agrees and tells Hinata he can count on him too.

The match resumes. Asahi remarks to Tsukishima that he envies him for having to face Aone more than he did the previous set. Tsukishima brushes him off and replies that it’s Hinata’s job to steal the spotlight and it’s Tsukishima’s job to get rid of troubles while in the background. Either way, Aone is still more focused on Asahi than anyone else.

Despite losing the first set, Date Tech’s confidence doesn’t waver. Oiwake remarks that no matter which attacker Karasuno has in front, they will simply shut him down. Aone blocks Asahi successfully, but Date Tech still has trouble against Hinata. Date Tech’s soon forced to call a timeout.

After the break, the players return to the court and Asahi calls out to Tsukishima. He reminds the first year of what he said about Hinata being the focus in the play, but he adds that it’s also important that they augment their attacks. After he says this, he goes to spike, thinking to himself that as the ace, he must fight for his team when the situation gets tough. He goes to spike past an opening but at the last second, Aone reaches for that spot and blocks Asahi.

Asahi doesn’t lose confidence and continues calling for tosses. The next move, Aone tries a quick and Asahi and Tsukishima block him. Karasuno continues leading, but Date Tech follows close behind. Hinata’s decoy skills are able to keep Date Tech from gaining the lead, but Date Tech’s starting to get used to him.

Karasuno reaches match point. Hinata is switched out, but Asahi’s at the vanguard. Hinata’s confident that they’ll win and tells the others to just believe in the ace. Asahi runs towards the toss and wonders what kind of ace he is if he can’t spike past the blockers. He ends up getting blocked, but Nishinoya saves the ball at the last minute. Asahi tries again, but the toss ends up too close to the net.

Aone pushes the ball back over and just as everyone’s expecting it to fall, Nishinoya reacts instinctively and receives it with his foot. Nishinoya, Sugawara, and Hinata call for Asahi to try one more time and Asahi runs after the ball. He thinks to himself that he must not lose concentration or stop. He needs to keep trying over and over again.

Despite everyone knowing that the ball’s going to go to Asahi, Kageyama still tosses to him and Asahi spikes with full power at the blockers. The ball flies onto the top of the net before falling over onto Date Tech’s side, giving Karasuno the last point it needs to win the match.

The players line up and shake hands. As Hinata’s heading off the court, Aone offers him his hand and the two become friends. Aone then goes to Moniwa and exclaims that they’ll get revenge at the spring tournament. Futakuchi joins in, but Moniwa reveals that the third years will be retired from the club by then. As the two underclassmen start protesting, Moniwa tells them that they’ll be able to win at the spring tournament with their own team. He tells them to make it to nationals and the two agree.

At Karasuno’s side, the guys go to bow to their spectators and see Yui and the other girls. Yui congratulates them for finally getting their revenge and they thank her. On the side, Ukai and Takeda comment on Asahi’s efforts during the match and how the victory helped him regain his confidence in himself.

In the bleachers, Takinoue wonders how Hinata knew to do a quick strike with Kageyama as Hinata notes to Kageyama that Date Tech never figured out their signal. Next to them, Tsukishima teases them for coming up with it and Hinata sheepishly admits that it was Sugawara who did. On another side, Sugawara and Daichi are walking out and Sugawara remarks that it may be selfish, but he wishes they’d won the match with his toss. Daichi replies that he’s glad Sugawara thinks that way and tells him that there’s another match tomorrow. They’ll win that one too and stay in this.

Suddenly, Karasuno hears a chorus of cheers from girls and turn to see the commotion. Oikawa’s just getting ready to serve as Karasuno sees the scoreboard. Aobajōsai’s only in its first match and is already overwhelming its opponent. Oikawa picks the ball up and states that the team that’s going to win the Interhigh and then nationals is his.

Retrieved from "https://haikyuu.fandom.com/wiki/Guarding_Your_Back_(Episode)?oldid=95184"
Community content is available under CC-BY-SA unless otherwise noted.