In this game, the player takes the role of the protagonist, the only volleyball player from Momojihara High School. The protagonist joins a joint practice held by Karasuno and interacts with the diverse cast of the Haikyuu!! universe. The player can befriend these characters and recruit them to make their own dream team.

In some cases, when the trust meter gets to a certain number (eg. 50), you may trigger a special event such as a practice game to recruit someone or special item (eg. Donation Poster from Hinata). However, you will need to bring a certain character with you (eg. Kenma may need Hinata to trigger his special event). If you don't bring the right person, they will always give you a hint on who to bring with you. You will also have to have good communication and a close bond to know what to do during a game.

After you complete the main story, there is an extra storyline called Shimada Mart.

The cast include key characters from Karasuno, Nekoma, Fukurōdani, Aoba Johsai, and Date Tech. Characters from other schools, such as Takeru Nakashima, Yūdai Hyakuzawa, Wakatoshi Ushijima, Masaki Gōra and Daiki Ogano also make an appearance during the game.

The special edition of the game came with a tin, phone charm, postcards, special features DVD and a download code for Haikyu Quest II.[2]

The "!" means that there is a special event happening in that area

Kenma will need Hinata to trigger his event

Hinata has triggered the event 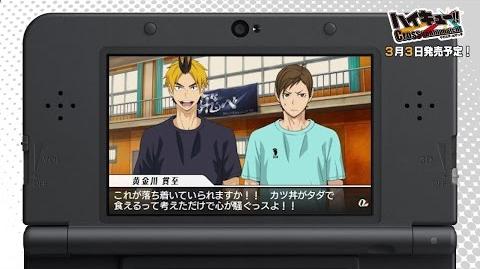 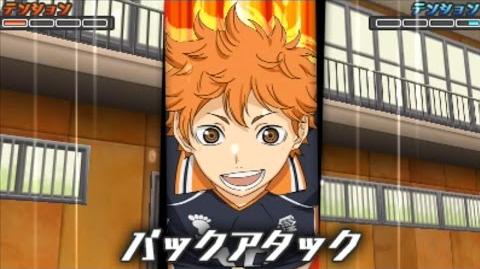