Welcome to the Haikyū!! Wiki

Welcome to the Haikyū!! Wiki, the encylopedia for the manga and anime Haikyū!! that anyone can edit. Please feel free to contribute to our site or take a look around, but please be aware that our site contains heavy spoilers.
About Haikyū!! 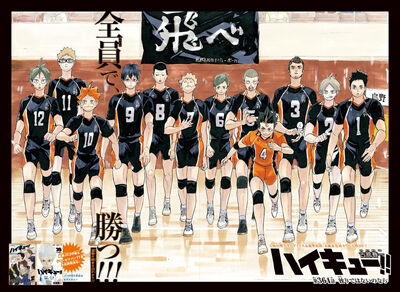 Shōyō Hinata, after seeing a volleyball match, aims to become the next "Little Giant" and thus joins his middle school volleyball club. After finding new members, he sets out for the middle school tournament, where he crosses paths with a formidable school with the "King of the Upper Court," Tobio Kageyama. Although his team lost, Hinata is still determined to aim for the top and exact revenge on Kageyama. Upon entering high school, he receives the biggest surprise: He and Kageyama are in the same high school volleyball club!

Volume Guide • Episode Guide • Timeline
Characters
Other Media
More »
Affiliates
Do you want to become affiliated with our wiki? Leave a message for one of our admins here
Contribute
Getting Started • Wiki Tutorial
Today is February 24, 2021
Haikyū!! Wiki currently contains:
1,131 articles and 7,157 files, with a total of 104,627 edits
Latest Updates 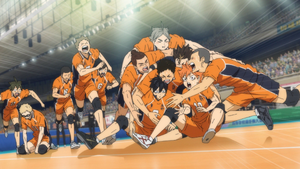 The Promised Land
Karasuno has claimed victory and will be advancing to the third round of the Spring Tournament. Emotions are on display from all teams as some are eliminated from the tournament while others prepare for their next battle. 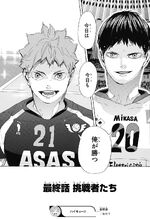 Challengers
It's 2021 and the Tokyo Olympics is fast approaching. With all eyes on them, Japan Men's and Women's Volleyball Team face off against powerful teams on the world stage. Hinata and Kageyama continue their volleyball journey together as both teammates and opponents.
News
More »
Websites
j-haikyu.com
Official Manga Website
haikyu.jp
Official Anime Website
Social Media