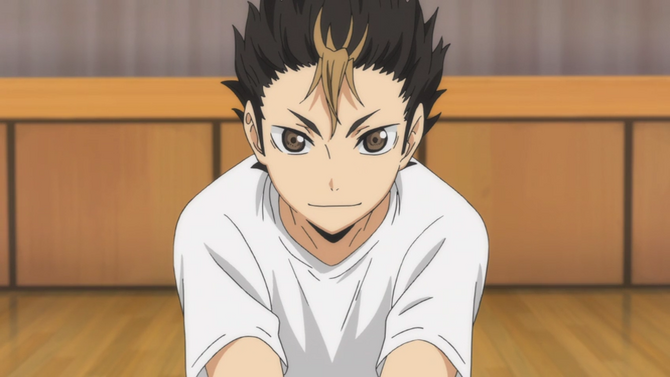 He Who is Called "Ace"
"エース"と呼ばれる人 ● "Ēsu" to Yobareru Hito
Director: Kantoku Sakuga ● Scenario: Taku Kishimoto ● Production: Susumu Mitsunaka
Aired: May 25, 2014
← Versus the Great King ● A Toss to the Ace →

He Who Is Called "Ace" (Japanese: "エース"とばれる, "Ēsu" to Yobareru Hito) is the eighth episode of the Haikyū!! series, written and illustrated by Haruichi Furudate and published in the manga magazine, Weekly Shōnen Jump. The episode premiered on May 25, 2014.

While practicing, Kageyama's shocked when a stranger runs into the gym and perfectly receives his serve. The stranger's revealed to be Nishinoya, Karasuno's libero who had been away due to club activities suspension. After introductions, Nishinoya learns that Karasuno's ace, Asahi, isn't back and angrily storms out. Seeing how unhappy the upperclassmen are without the ace, Hinata and Kageyama go to him to try to convince him to return. Meanwhile, Takeda continues to pursue Keishin Ukai as the next coach of Karasuno High. Ukai persistently refuses to help, but Takeda comes up with a plan that he believes will pull Ukai into the world of coaching.

Surprised by the unknown guy’s perfect receive, Kageyama freezes as Hinata approaches the former. Without thinking, Hinata automatically exclaims that the guy’s shorter than him, annoying the latter. Just as he's yelling at the first year, Tanaka and the third years arrive. They greet the guy, revealing him to be Yū Nishinoya.

After introductions, Nishinoya compliments Kageyama on his serve and asks him about his junior high. They discuss their junior highs briefly before Kageyama asks Nishinoya about why he chose Karasuno. To the first years’ surprise, Nishinoya reveals that he came only because he likes the girls’ uniforms and how the boys could wear a black gakuran. At that moment, Kiyoko comes in and Nishinoya runs towards her, leaving the first years stunned at his rambunctious personality.

After getting slapped by her, Nishinoya comes back and asks about Asahi. Finding out that the latter isn’t around, Nishinoya insults him and yells that if Asahi isn’t coming back, he isn’t either and leaves.

In a flashback, Nishinoya thinks about how his job is to keep things connected from the ground because the sky is the spikers’ domain. He faces an unknown ace and begs him to give him another chance to let the ace decide the toss.

Back in the present, Hinata approaches Nishinoya and asks him if he’s a libero. Coldly, Nishinoya asks back if he only thinks that way because he’s short, but Hinata replies that since Nishinoya is good at receiving, he must be a libero. He then remarks that he’s bad at receiving despite it being one of the most important skills to have as a volleyball player so he wants Nishinoya’s help. Nishinoya looks skeptical at first but after Hinata calls him senpai, he agrees eagerly.

In the gym, Nishinoya tries to teach Hinata and Tsukishima receiving basics, but neither of them understands the language he uses. Hinata suddenly asks the libero who Asahi is and Nishinoya replies that Asahi should be Karasuno’s ace, surprising Hinata. Hinata reveals that he wants to be an ace and to his surprise, Nishinoya encourages him. Nishinoya then exclaims that the ace may sound cooler than setter or libero but in a match, what’s more amazing than a good spike is a good receive. In volleyball where height matters, shorter people can only thrive as liberos, but Nishinoya didn’t become one because of that. He chose the libero position because it’s the most important role in volleyball–the one that helps keep the ball in the air and keeps the team from losing.

After being asked what his specialty is, Hinata shamefully admits that he’s a decoy and despite Nishinoya’s words of encouragement, Hinata still appears depressed. On the side, Sugawara remarks that with Hinata and Kageyama here, spikes that have never worked before are now possible.

Elsewhere, Takeda approaches Keishin Ukai, the original Coach Ukai’s grandson. He asks him to coach the boys’ club but Ukai refuses, explaining that he’s not into coaching, and notes that Takeda’s only asking him because he’s related to Ikkei Ukai. Takeda admits to it and reveals the bad state Karasuno is in without a coach, but Ukai still refuses. Takeda leaves, but persistently remarks that he’ll come again. He tells Ukai that he’ll understand his stubbornness once he sees the boys play.

The next day, Sugawara approaches Asahi in his class. He asks Asahi to come back but Asahi refuses, stating that he’ll only get in the way. Sugawara tries to reason with him, telling him about Hinata and Kageyama, but Asahi gets called away just then. As he exits the room, he sees Hinata and Kageyama standing there.

In the faculty office, Takeda finishes a phone call with someone. He stands up excitedly as he clutches a piece of paper with a practice match scheduled for the training camp.

Asahi is introduced to Hinata and Kageyama and he wishes the two luck. Surprised, Hinata asks him if he’s going to play with them too, reasoning that since he wants to be an ace, he needs to see a real one first. Asahi apologizes and states that he’s not an ace anymore before leaving. Watching him go, Kageyama wonders if Asahi injured himself, but Sugawara replies that Asahi has grown to hate volleyball. There was a match where Asahi was completely blocked, leading to a crushing defeat for Karasuno.

Back at the gym, Takeda announces the Golden Week Training Camp and at the end of it, a practice match against Nekoma High, Karasuno’s longtime rival. Daichi wonders how Takeda arranged it since Nekoma had rejected them for a while now. Takeda reveals that he had to arrange it in order to get someone’s attention.

However, Nishinoya reveals that he can't participate. He wants to train with everyone but if they play and win, it’ll show that they can do it without Asahi. Daichi understands but tells him to at least come to the training camp.

At the end of practice, Hinata wonders if the upperclassmen would be happier if Asahi came back. Kageyama states that Asahi blames himself because he’s too focused on winning the game by himself, to which Hinata points out the hypocrisy. Hinata remarks that he doesn’t like it when the team doesn’t get along.

The next day, the two first years approach Asahi again. He wonders why they’re so interested in him when they barely know each other. Hinata exclaims that without Asahi, the upperclassmen aren’t happy, but Asahi isn’t swayed. He notes that he can’t visualize spiking past high blocks anymore and Hinata sympathizes with him. He explains that he used to be like Asahi but with Kageyama tossing to him now, he can get past any blocker. As he describes the way the ball hit his hand, Asahi remembers the feeling as well and realizes how much he actually misses volleyball. Hinata continues by pointing out how Asahi has scored more points than lost, hence why he’s the ace of the team, surprising the latter. The two first years then leave, but Kageyama stops to remind Asahi that he doesn’t win alone in volleyball.

On the way home, Asahi stops by the gym. Just in time, he sees Kageyama toss to Hinata and remembers Hinata’s description of a spike. He stares at his own hand, reminding himself of the same feeling he used to get.

Retrieved from "https://haikyuu.fandom.com/wiki/He_Who_Is_Called_%22Ace%22_(Episode)?oldid=95127"
Community content is available under CC-BY-SA unless otherwise noted.