This stage play ran during fall of 2019.  The story covered the All-Japan Youth Training Camp and the Miyagi First Years' Training camp just ahead of the Spring Interhigh.

The play opened on November 1 and ran until December 15. It performed in three cities across 33 performances:

The official DVD and Blu-ray was released on April 22, 2020. The bonus features include footage of the last performance's curtain call, backstage footage, and a full stage view.

Photo of the new Karasuno cast 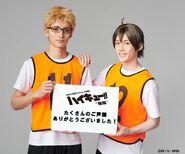 Photo of Tsukishima and Yamaguchi

Photo of the whole cast to celebrate 300 total performances

Photo of Sakusa, Hoshiumi, and Atsumu

Photo of the second years

Photo of the third years

Photo of Kiyoko and Yachi

Photo of Takeda and Ukai

Photo of the whole cast after their final show

The Karasuno cast has been completely revamped and filled with new actors after the graduation of the original Karasuno cast. For the first time, there will be an actor taking the role of Kinoshita. Several cast members from each of Aoba Johsai High, Shiratorizawa Academy, and Date Tech High reprised their roles while new casts were added to play Atsumu Miya, Kōrai Hoshiumi, Kiyoomi Sakusa, and Kanoka Amanai.