The Start of the Giant

The stage play focused on Hinata and Kageyama developing their new attack, as well as portraying the stories of other members on the Karasuno team. It covered Karasuno's matches against Johzenji and Wakutani Minami during the Spring Interhigh preliminaries.

The official DVD and Blu-ray were released on October 17, 2018. Its bonus features included footage of the last performance's curtain call, backstage footage, and a full stage view.

Hinata and Kageyama on the promo visual

The Start of the Giant advertisement.

Photo of the second years

Photo of Nakashima and Kawatabi

Photo of the Johzenji Cast

Photo of the Wakutani South cast

Photo of Nekoma and Fukurōdani 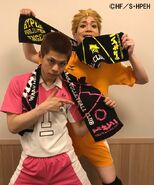 Photo of Nakashima and Terushima 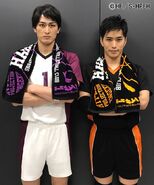 Photo of Ushijima and Daichi

Photo of the third years

Photo of Kiyoko and Yachi

Photo of Nakashima, Hinata, and Terushima

Photo of the first years

Photo of Hinata and Ushijima

Photo of Hinata and Kenma

Photo of the whole cast to celebrate 200 total performances

Most of the cast of Karasuno from The Summer of Evolution returned; though the roles of Sugawara, Akaashi, and Daichi were recast. In addition, new cast members for Johzenji High, Wakutani Minami High and Wakatoshi Ushijima joined the ensemble. Originally, Kōki Yoshimoto was set to reprise the role of Bokuto, but a foot injury made him withdraw from the play. Takumi Higashi, previously the actor for Konoha, was brought in as a replacement. Keita Tanaka, the actor for Daichi from the first run, reprised the role, replacing Kentarō Akisawa.

In addition, four cast members from each of Aobajōsai and Date Tech made appearances in the show via video footage:

Retrieved from "https://haikyuu.fandom.com/wiki/Hyper_Projection_Play_%22Haikyū!!%22_The_Start_of_the_Giant?oldid=105182"
Community content is available under CC-BY-SA unless otherwise noted.