The stage play covered the aftermath of Karasuno's loss to Aobajohsai and their subsequent training camp in Tokyo.

The official DVD and Blu-ray were released on March 14, 2018. Its bonus features included footage of the last performance's curtain call, backstage footage, and a full stage view.

The play opened on September 8 and ran until October 29. It was performed in five cities across 37 performances:

Photo of Hinata to countdown to Haikyū Day 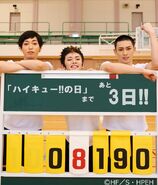 Photo of Karasuno second years to countdown to Haikyū Day

Photo of Kenma and Kuroo to countdown to Haikyū Day

Photo of Bokuto and Akaashi

Photo of Yachi and Kiyoko

Photo of Yamaguchi and Tsukishima

Photo of Hinata and Kenma

Most of Karasuno's Winners and Losers cast returned; though the roles of Kageyama and Nishinoya were recast, and Hitoka Yachi and Kiyoko Shimizu were added to the cast. The Revival Nekoma cast also reprised their roles, though Inuoka did not appear, while Lev Haiba was added to the cast. Other new characters to the play include the members of the Fukurodani volleyball team, Saeko Tanaka , and Akiteru Tsukishima.

Retrieved from "https://haikyuu.fandom.com/wiki/Hyper_Projection_Play_%22Haiky%C5%AB!!%22_The_Summer_of_Evolution?oldid=77291"
Community content is available under CC-BY-SA unless otherwise noted.