This stage play ran during spring of 2019 and focused on Nekoma as the main team as they face off against Fukurōdani Academy and Nohebi Academy in the Tokyo qualifiers for the Spring Interhigh.

The official DVD and Blu-ray were released on October 16, 2019. Its bonus features included footage of the last performance's curtain call, backstage footage, and a full stage view.

The play opened on April 5 and ran until May 6 with 30 performances. It differed from the previous installments in that it only lasted a month and was performed in three cities instead of the usual five.

Photo of Kuroo and Kenma 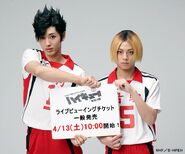 Photo of Kuroo and Kenma 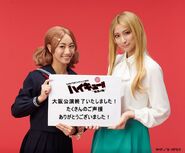 Photo of Akane and Alisa

Photo of Konoha, Bokuto, and Akaashi

Most of the Nekoma cast from The Summer of Evolution returned, along with new casts for Shōhei Fukunaga, Yūki Shibayama, Akane Yamamoto, and Alisa Haiba. The majority of Fukurōdani also returned with the exception of Higashi Takumi reprising his role as Akinori Konoha and new casts for Kōtarō Bokuto and Haruki Komi. Lastly, brand new casts for Nohebi joined the production.

Retrieved from "https://haikyuu.fandom.com/wiki/Hyper_Projection_Play_%22Haikyū!!%22_The_Tokyo_Match?oldid=77287"
Community content is available under CC-BY-SA unless otherwise noted.