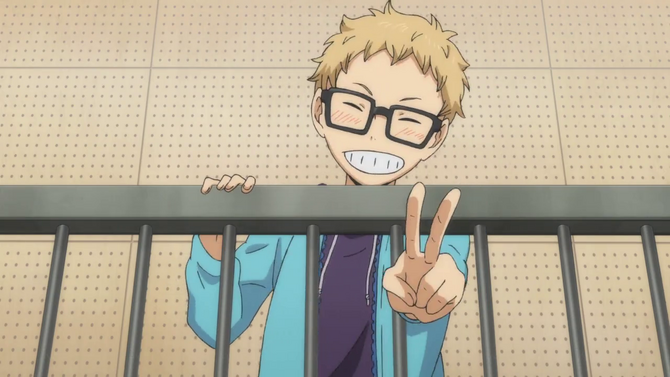 "Illusionary Hero" (Japanese: ヒーロー, Genkaku Hīrō) is the eighth episode of Haikyū!! Second Season, based on the manga Haikyū!! by Haruichi Furudate. The episode premiered on November 22, 2015.

Tsukishima begins to think that he shouldn’t put so much effort in training anymore like his brother did, to avoid being disappointed if he fails. Despite practicing very hard, Akiteru failed to become a regular player for Karasuno due to the number of more talented players on the team, including Hinata’s idol, the “Small Giant.”

Alone in the bathroom, Tadashi recalls memories of when he was in grade school and being picked on by bullies. Tsukishima, having been walking by, observes the scene. The bullies are unsure of Tsukishima and become dazed when he calls them lame. One bully runs over and challenges him but quickly backs down when he sees how much taller Tsukishima is. Tadashi admits he was not sure if Tsukishima had been calling him lame as well and was impressed that, despite being outnumbered, he stood his ground and Tadashi was jealous of how cool Tsukishima was. Coming out of his thoughts and remembering how Hinata asked what he would say to Tsukishima about not putting in more effort into volleyball, Tadashi makes the decision to speak with Tsukishima.

Tsukishima announces to Daichi that he is leaving practice but Tanaka interrupts saying that they still need Tsukishima in order to work on the synchronized attack. Ennoshita appears and says he would like to participate in the practice and Tsukishima leaves during the commotion Tanaka causes when he believes Ennoshita is challenging him for his spot.

As he leaves, Tsukishima recalls a memory of watching his older brother, Akiteru Tsukishima, play a game in middle school. At home, Tsukishima asks Akiteru what high school he has chosen to attend. Akiteru answers that he has picked Karasuno, stating that he believes the team is strong and may even be able to beat Shiratorizawa.

After entering high school, Akiteru begins staying late during practices, saying that he needs to put in more work as there are many talented and hard-working players on the team. A short while later, Tsukishima asks his brother if he can attend one of the games but Akiteru asks that he doesn't, claiming he will be thrown off if Tsukishima is there watching. Tsukishima asks his brother if he plays the same position he did in middle school. Akiteru answers he does and Tsukishima proudly proclaims his brother is the ace again. Akiteru changes the subject by asking Tsukishima what he is doing in the boys' volleyball club he recently joined. Tsukishima answers that he is working on receives and that he does not find it fun at all. Akiteru gives him a quick lesson in receiving and that he has to make a connection with his team in order for plays to work. Tsukishima says that he is friends with the other players but Akiteru quickly calls him out on it.

The next time Tsukishima is returning to practice, he spots Tadashi observing the practice from the entryway. Tadashi tries to thank Tsukishima for helping him against the bullies but is shocked when he believes Tsukishima doesn't remember him. When Tsukishima reveals he does remember he then questions what Tadashi is doing at the practice. Tadashi answers that he wants to join a sports team but was not able to join baseball and soccer since they had 'big, scary' players and he believed volleyball would instead be a good choice. He quickly becomes distracted after noticing Tsukishima's shoes, which Tsukishima explains belong to his brother; who plays volleyball at Karasuno as the ace. This impressed Tadashi greatly.

A few years later, Tsukishima approaches Tadashi during class asking him if he'd like to join him in going to the next Karasuno game as he had yet to see his brother play. Tadashi agrees and they are approached by another student who says he also has a brother on the team. He asks Tsukishima of his brother and becomes confused when he says that the rosters did not list anyone named Akiteru Tsukishima being on the team. Tsukishima denies this, claiming his brother is on the team.

The next day, all three attend the Karasuno game. Tsukishima searches the team for his brother but is unable to find him. Their classmate then points out that, for the last year, the ace player is a second-year everyone calls the Tiny Giant. Tsukishima is stunned at this, not wanting to believe that his brother isn't actually on the team. He soon recognizes a voice coming from the Karasuno cheering squad and spots his brother standing among them; horrified that Tsukishima has discovered he is not on the team.

Back in the present, Tsukishima is walking alone and questioning why his brother felt the need to lie about being the ace and putting so much work into the game.

His thoughts are interrupted when Tadashi suddenly appears. Tadashi begins to tell Tsukishima that, even though he had admired his friend for being cool, lately he has been acting very lame. He goes on to say that it is very possible that Hinata will become the next Tiny Giant and that Tsukishima should work harder to beat him. Tadashi questions why Tsukishima always sets limits for himself when they both know that Tsukishima has the means to become a great player.

Tsukishima then begins to question the possibilities and outcomes of what would happen if he did start working harder; wondering 'what comes next' or 'what comes after that'. He then states that, no matter how hard someone works or tries, there is always the possibility that they will lose. Tsukishima then asks Tadashi why he and the others continue to push themselves knowing that they may not be able to win.

Angrily, after recalling his failed jump float during the Seijoh game, Tadashi yells at Tsukishima saying there is nothing more that drives them than their own pride.

Stunned, Tsukishima muses how the day has finally come that Tadashi was able to stand up to him and calls him cool for the first time. Though still not sure, Tsukishima says that he will go ask certain others and leaves.

Later, Tsukishima enters the third gym and approaches Bokuto and Kuroo; saying he'd like to ask them a personal question. Though Bokuto and Kuroo become irritated when Tsukishima points out their teams are 'moderately' good and how it's near impossible to win every game, the two listen as he asks them what pushes them to try so hard when volleyball is just a club.

Bokuto especially becomes annoyed when Tsukishima says volleyball is 'just a club' and asks if Tsukishima finds volleyball fun. When Tsukishima answers that he doesn't, Bokuto questions if it's because he sucks at volleyball. Bokuto then tells him that he himself only recently began to feel volleyball was fun. The source of his joy came from when he began practicing his line shots after his cross shots were becoming easy for opponents to block. During a game against the same blockers, Bokuto was able to score every shot and described it as his time had come. He tells Tsukishima that when he is playing at his best, he won't care about what the future holds and when he has his own special bad ass moment, that will be when he falls in love with volleyball. Promptly after answering his question, Bokuto and Kuroo drag Tsukishima to block for them as a fair trade.

Tadashi returns to the Karasuno teams' practice and is approached by Hinata and Yachi. He informs the two that Tsukishima is practicing with Bokuto and Kuroo, surprising Hinata in the process. Tadashi then asks Hinata if he sees Tsukishima as a rival. Hinata answers that he does and that he has a lot to make up for as Tsukishima has everything he doesn't.

After Hinata runs off to join the team, Yachi tells Tadashi that since Hinata and Tsukishima see one another as rivals, it's like the sun vs the moon (a hint at their last names).

The next day, Karasuno is playing against Fukurōdani. After noticing how intense Bokuto seems to be, Ukai calls a time-out and informs the team that they should try to do soft blocks against his spikes. Tsukishima then surprises everyone by agreeing that they don't need to 'stop' Bokuto.

The game proceeds and, while getting ready to block, Tsukishima recalls what Kuroo had taught him the previous night about blocking. As Bokuto goes to spike, he becomes stunned at how intense Tsukishima seems to be and changes his spike to a feint at the last moment and scores.

On the sidelines, Ukai notices Tsukishima's behavior and Bokuto is teased by his team at his sudden change in attack; Kuroo even laughs from where he had seen the event take place.

Tadashi and Yachi notice how Tsukishima seems to silently challenge Hinata. Yachi notes how it is now the sun vs the moon.

Retrieved from "https://haikyuu.fandom.com/wiki/Illusionary_Hero_(Episode)?oldid=93007"
Community content is available under CC-BY-SA unless otherwise noted.