An updated version of the game named J-Stars Victory VS+ was released on Playstation 4, Playstation 3 and Playstation Vita in Europe and North America on June 26 and June 30, 2015 respectively. 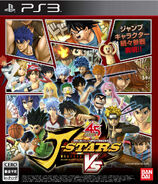