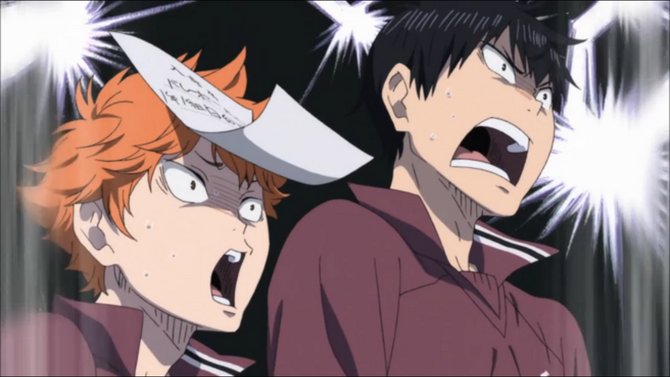 Hinata arrives at Karasuno High School determined to join the volleyball club and defeat Kageyama. He is shocked when he walks into the gym and finds that Kageyama is a potential member of the Karasuno team as well. They fight right away and when captain Daichi Sawamura arrives, he throws the two out and tells them they can't join the club until they start to get along. Instead of agreeing to work as a team though, they challenge the upperclassmen to a match on the condition that if they win, they join the team.

At the entrance of the gym to Karasuno Boys’ Volleyball Club, Hinata remembers how he lost devastatingly to the “King of the Court”, Tobio Kageyama, in his first and last official match of junior high and sworn to get revenge by training with Karasuno High. However, inside the gym is Kageyama, who recognizes Hinata immediately. Kageyama thinks of how Hinata’s agile and has good reflexes but doesn’t put any of that into good use and announces that to the spiker, leading to a small argument. Hinata asks why Kageyama's here and not at a stronger school. Kageyama states that he didn’t get into the strongest school in the prefecture and Hinata wonders why, especially since the setter’s nickname is the “King of the Court”. Pissed off, Kageyama yells at Hinata to not call him that. Before the latter can reply, some of the club members arrive. They don’t notice Hinata at first, their attention solely on Kageyama. Hinata resorts to yelling out his introduction which garners everyone’s attention. Tanaka immediately recognizes him as “Shorty #1”. Daichi comments on how it’s surprising that Kageyama and Hinata are both joining the team because of what happened last year. Tanaka compliments how despite his size, Hinata has guts. Hinata exclaims even though he's short, he can jump, and he’ll become Karasuno’s ace. While the upperclassmen are complimenting Hinata's ambition, Kageyama cuts in, telling him to improve before saying such things and to not waste his time like he did in junior high. Hinata exclaims that he had played with all his might in that game last year and not everything he did was a waste. Daichi tries to point out how they’re teammates now and shouldn’t fight, but neither of the first years pays any mind to him. They end up creating a 1-on-1 match against each other at the same time as the vice-principal walks in. Tanaka tries to warn the two to keep it down, but they end up playing against each other anyway. Hinata states that last year, he wasn’t able to receive a lot of Kageyama’s spikes but he has changed since then. Kageyama accepts the challenge, stating that he has changed as well. Kageyama serves powerfully and Hinata ends up dodging it. Kageyama asks how that response’s different from last year and Hinata yells for another try. To Kageyama’s surprise, Hinata successfully receives the second one, only to send it towards the vice-principal. The ball ends up knocking his wig off his head, and he takes Daichi outside to talk. A moment later, Daichi returns and announces that the vice-principal isn’t going to take any actions against the team, as long as they forget what they saw. Before Daichi can say anymore, Kageyama and Hinata start fighting again over whose fault it was. Daichi stops them and tells them that Karasuno was one of the top teams in the prefecture until a few years ago and had even gone to nationals once; now, they’re ranked, at best, eighth in the prefecture and other schools have even started calling them “Fallen Rivals” or “The Crows That Can’t Fly”. When he was younger, he would pass by students from Karasuno that had competed against the strongest teams in Tokyo’s huge gymnasium which gave him goosebumps. He wants to go back to that gym now. This inspires Hinata who thinks of how he’ll be on the same court as the Small Giant. Kageyama points out that many schools have the same dream, but Daichi replies seriously that he means what he says, intimidating Kageyama. For that to happen, Daichi needs a unified team that won’t be bothered by the vice-principal again. He walks towards the two first years and says that he doesn’t need them to be friends but now that they’re on the same side of the net, they are allies. No matter how strong they are, if they can’t get along and end up hindering their teammates, they’re not wanted. He then pushes the two, along with their application papers, out of the gym. Until they realize they’re teammates, they won’t be participating in this club. He then closes the door on them.

The duo tries begging to be let back in but can’t keep themselves from fighting. Kageyama knocks Hinata out of the way and says that he will get along with him. Daichi opens the door a tiny bit and asks him if he’s sure. Unnerved, Kageyama ends up telling the truth: if he had to cooperate with Hinata in a match, he would rather receive, spike, and toss all by himself. Daichi laughs at his honesty and points out how in volleyball, one player can’t touch the ball twice.

The duo doesn’t give up though and continues camping out outside the gym. Kageyama suddenly announces that he’ll challenge the upperclassmen to a 2-on-2. If they win, they’ll be let into the club. Kageyama tells Hinata to just do the best he can and not get in his way. Hinata exclaims that he wants to stand on the court again because of the feeling it gives him, reminding Kageyama of his defeat last year at the end of the tournament. Later on in the evening, the duo challenges the upperclassmen to a 2-on-2. Kageyama states that if they lose, they’ll endure any punishments. Daichi reveals that there are two other first years and changes the game to a 3-on-3 against them with Daichi on their team and Tanaka on the duo’s team. If Hinata and Kageyama lose, as long as the third years are still here, Kageyama will never get to play setter. As Kageyama’s raging, Hinata remarks that Kageyama’s good enough to become a regular anyway and spikers are cooler than setters. Kageyama grabs Hinata and yells that setters are the control towers of a team and are the ones that create those flashy spikes for the spikers. Kageyama thinks about what Daichi said and plans to only send tosses to Tanaka because Hinata’s too unreliable.

As they’re arguing, Tanaka discreetly lets them know from inside the gym what time the gym would be empty. The duo agrees to come in at 5 am the next day, only to find the gym locked. As they’re trying to get in, Tanaka arrives and opens the door for them, as long as they call him “senpai”. As Tanaka walks in, he thinks of what Daichi told him about the duo and how they could bring out each other’s strengths. If those two could work together, Karasuno will evolve explosively. However, at the moment the two need to work on their relationship first.

Retrieved from "https://haikyuu.fandom.com/wiki/Karasuno_High_School%27s_Volleyball_Club_(Episode)?oldid=91807"
Community content is available under CC-BY-SA unless otherwise noted.