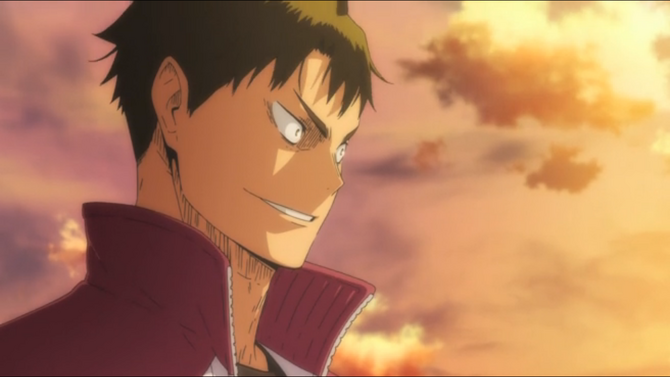 After losing in Inter-High, Karasuno is busy practicing. As Coach Ukai wishes for more practice matches for the team, Takeda barges in with great news: Karasuno has been invited to take part in Nekoma's training camp! Kageyama and Hinata get lost during a run and end up meeting with Shiratorizawa Academy's Ushijima. After Ushijima claims that the only good player from Aobajohsai is Oikawa, Hinata challenges him. Later on, Karasuno receives some news that may end some of their dreams of going to Tokyo.

Hinata has a flashback of the game against Aobajohsai. He opens his eyes and looks back to see his teammates miss getting the ball, causing Seijoh to get the final point and win the game. The flashback ends and Hinata is shown setting up the volleyball net in the gym and accompanied by Kageyama.

The team is split into two groups and they begin playing a game. Hinata runs up looking to get the next hit but the ball is sent to Tanaka, throwing Tsukishima and Asahi off. Tanaka lands the spike, just getting by Yamaguchi and Ennoshita. Daichi serves next. Nishinoya receives and Sugawara does Asahi's favorite set. Kageyama manages a one-touch which is then saved by Narita, Kinoshita and sent back over by Daichi.

Hinata and Kageyama attempt to block Tsukishima but are tricked when he does a feint instead and mocks them for falling for it. Yamaguchi does the next serve but, after Daichi is able to receive it easily, feels it could have been done better. Hinata and Tanaka attempt a double-quick with Tanaka taking the ball only for Nishinoya to save it doing his Rolling Thunder. Sugawara sends the last hit to Asahi and he manages to score with Kinoshita just barely missing the ball.

A new set begins with Yamaguchi serving and getting a net in. The ball is saved and sent to Hinata who is ultimately blocked by Tsukishima and Asahi. After Daichi is able to save it, Hinata and Kageyama successfully pull off the quick attack.

Ukai tries to bring the game to an end but gives in when the boys ask for another set. After another few sets, Hinata and Kageyama try to practice the quick but are stopped when Daichi tells them to do their cool down. Ukai silently goes over how the team needs in-game practice more than anything at the moment, though he is unsure of what he can do since the neighborhood team is not always available for games.

At that moment, Takeda comes running through the doors but trips and gets a nosebleed. When he's asked if he's alright, he instead proudly announces that the team will be going to Tokyo. The boys become ecstatic when they realize it means they will be able to play against Nekoma. They become even more thrilled when Takeda explains that, thanks to Coach Nekomata's invitation, the team will be able to participate in the summer training camp held by the Fukurōdani Academy Group that holds practice matches with several other schools in the Kanto region each year; giving them more teams to play against.

Ukai is impressed that they were invited to join as it can sometimes either take years of building an established relationship or having a special connection with someone in the group to be invited to the training camp. The boys thank Takeda for his work in arranging this trip while he encourages the boys to make the most of the trip.

Kageyama vows to figure out Kenma's setting method, causing Kenma to feel a chill at Nekoma High to which Yamamoto fears is Kenma catching a cold. Nishinoya and Tanaka make their own declarations which cause Yaku to feel a chill and Yamamoto to feel fired up. Hinata makes his own promise that he will get through the Nekoma blockers, specifically Inuoka.

Takeda then informs them that the Nekoma team will be having their own tournament soon so the training camp will not be taking place for a while and the Karasuno team will still need to get permission and clearance from the school to go.

The next day, Hinata finishes his lunch when he hears several of his classmates talking outside the classroom door. He goes over to see what they are looking at and sees Kiyoko in the hallway. Hinata's classmates are stunned to learn that Hinata knows Kiyoko when she walks over and greets him. He is then taken by surprise when Kiyoko asks if he knows of any first years who have not joined a club.

Later, several of the boys are in the club room when Tanaka is reading a magazine article that features Oikawa and how he and most of the third years on the team plan to continue playing volleyball in order to get revenge on Shiratorizawa.

Tanaka, and eventually Hinata, declares that he will not be beaten by Seijoh and nearly tears the magazine until Sugawara knocks him over and takes the magazine away. He observes the page and sees that Ushijima has made the World Youth team as Japan's representative. He shares this information with Daichi who then encourages the team to do their best to be the team to represent Miyagi in the Spring Nationals.

In the teacher's lounge, Takeda becomes nervous when he observes several graded papers belonging to some of the players.

Now at Heartbreak Hill, Daichi has the team run to the mid-point in pairs. Tanaka and Ennoshita go first, followed by Tadashi and Tsukishima then Sugawara and Asahi and then Kinoshita and Narita. The next pair to go is Hinata and Kageyama. The two instantly turn it into a race against one another and quickly pass Narita, Kinoshita, Sugawara and Asahi but fail to stop at the mid-point and continue running.

They become so engrossed in their race that they do not notice they have eventually made their way to Wakano. Kageyama recognizes that they are not far from Shiratorizawa Academy. Hinata asks if this is the school that Ushijima attends and, to their shock, Ushijima was jogging right past them when he heard his name.

After a moment of Hinata and Kageyama not being able to say anything, Ushijima attempts to continue jogging but is stopped when Kageyama suddenly asks that he and Hinata be allowed to follow him to Shiratorizawa and observe his plays. Hinata is utterly stunned at Kageyama being so blunt but is surprised when Ushijima recognizes they are the ones who perform the quick attack and then says they can follow him if they wish as he believes it will make no difference; saying 'It won't make you any better and it certainly won't make our team worse'.

Upon arriving at Shiratorizawa Academy, Hinata is instantly taken by surprise at the size of the school including the running track, horse riding club and that the volleyball team has their own bus. He and Kageyama eventually make their way to the gym and observe a team inside that Hinata mistakes for another high school team but Kageyama points out is actually a college team, explaining that the Shiratorizawa team has to practice against college teams in order to get proper practices as high school teams are not good enough.

Ushijima arrives at the gym and Kageyama quickly introduces himself, only to learn that Ushijima already knows who he is and the middle school he attended. Ushijima then says he had observed Kageyama in a game once and points out that Kageyama was not able to devote himself to the team ace.

Hinata laughs and says that Ushijima is correct in this about Kageyama before saying that Oikawa is not the devoted type as well. Ushijima admits that he had hoped for Oikawa to attend Shiratorizawa as he is an excellent setter who is able to bring out the best in players and without him, Aobajohsai would be a weak team.

Hinata takes this as an insult towards Karasuno as he determines Ushijima must see them as, not barren land like Aobajohsai, but a concrete parking lot. Ushijima, not wanting to listen to the two anymore, attempts to walk away when a stray ball bounces out of the gym.

Ushijima jumps to grab it but is surprised when Hinata is able to beat him and grab the ball himself. Hinata then introduces himself and that he is from Karasuno High School. He declares that his team will beat Shiratorizawa and make it to the nationals. Kageyama also says that he will show Ushijima that he is a better setter than Oikawa and the two promptly depart, not noticing Ushijima admires their physical abilities and spirit.

Later that night, Takeda is speaking with the team about the Tokyo trip and when it will be taking place. The school has granted permission for the team to attend but soon, to the horror of several players, school exams will be taking place. He informs them that if any of them fail in even a single subject, they will have to take tutoring lessons and the trip to Tokyo will not be possible to attend.

Retrieved from "https://haikyuu.fandom.com/wiki/Let%27s_Go_To_Tokyo!!_(Episode)?oldid=95249"
Community content is available under CC-BY-SA unless otherwise noted.