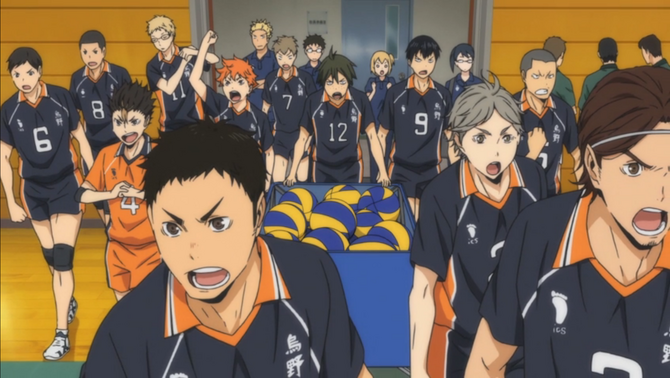 "Match Begins!!" (Japanese: !, Shiai Kaishi!) is the twelfth episode of Haikyū!! Second Season, based on the manga Haikyū!! by Haruichi Furudate. The episode premiered on December 19, 2015.

Karasuno's first opponents are Ohgiminami High, one of the teams Shiratorizawa had defeated in the Interhigh. Former Coach Ukai comes along to watch Karasuno play, and the general public comment on how much Karasuno has changed from the rumors. Hinata bumps into Yoshiki Towada in the bathrooms and vows that Karasuno would beat their team and their future opponents in order to make it into the nationals.

As numerous teams and fans arrive for the tournament, three random players notice the Karasuno team off to the side by themselves. They make note of how the team had gone full sets against Aobajohsai and of each player and how they stand apart, such as Kageyama being the 'King of the Court' and Nishinoya having won the best libero during middle school. They lastly note Hinata and how he was able to do so many quick attacks.

At that moment, Hinata turns and reveals his sickly expression. Yachi questions Hinata if he is feeling alright and though he answers he does due to having thrown up earlier on the way to the tournament, Yachi offers him something to ease his stomach. As Hinata is being insulted by Kageyama for having over-eaten and causing his nausea, Yamaguchi becomes nervous to the point he too feels nauseated and feels he may throw up as well, to which Tsukishima urges him to rush to the bathroom. Asahi also shares Yamaguchi's anxiety which Sugawara had believed the ace to have been concentrating but instead was actually trying to keep his nerves under control. As Nishinoya and Tanaka tease Hinata, the three players question if Karasuno really had been able to go head-on with Seijoh.

Later, Hinata is heading to the bathroom when he runs into the captain of the High Boys Volleyball team, Yoshiki Towada. As Hinata recognizes Towada is a player from the team they will be going against first, Towada mistakes Hinata for a middle school student here to see an older sibling play. Hinata corrects his mistake by introducing himself and the team he is on as well as declaring Karasuno will be heading to the nationals. Towada mocks Hinata's belief that Karasuno will make it that far and, if by chance they were to make it to the finals, they would only get beaten by Shiratorizawa. He then walks away saying that they can at least have fun until the time comes that they are each defeated, leaving Hinata watching him in confusion.

With the game before them having ended, the Karasuno and Ohgiminami teams head onto the court to begin their warm-ups. As they do, two players from Ohgiminami, Yūki Tazawa and Sōma Oyasu, stare down Tanaka and Hinata. Tanaka remarks that the Ohgiminami players must be recruited from the local jail and Sugawara states Tanaka is the last person who should make that statement. As the Karasuno players are practicing their spikes, Tazawa and Oyasu taunt Tanaka again by saying that because he has a shaved head he must have lice. Tanaka puts on serene expression and claims to ignore their taunts before delivering a powerful and aggressive spike to successfully intimidate the two.

Moments later, the teams line up and thank each other for the game before getting pep-talks from their coaches. Ukai warns the team that, even though the Ohgiminami team's only third year has retired, the second-years have been the driving force of the team and they had won their previous match in straight sets. Takeda also reminds the team that, while they had lost nearly all of their matches during the summer training camp, their new weapons are starting to be more successful and it's time for them to show everyone how strong they've become.

In the stands, Yachi hears a fan, Gengorō Takahashi, call out to someone and spots Ikkei Ukai arriving with two of his young students. She hears how Ikkei is partly here to see his grandson before one of the students, Yū Ogasawara, recognizes her as one of Karasuno's managers and questions why she is in the stands. Yachi sadly replies that only one team manager is allowed to be on the court and therefore she must watch from the stands. Takahashi reveals he has not seen Karasuno play for some time but believes that the team may go quite far this year. Ikkei replies that there is no such thing as a sure win and that victory comes down to the players' condition, anxiety and patience.

The game soon begins and Asahi is first to serve, delivering a service ace that stuns the Ohgiminami players. The game continues with Karasuno easily taking the lead as they continue to score points one after another. During one rally, Daichi notices Tazawa switch from a spike to feint and quickly rushes forward to cover it; believing that he can see the motions of the spikers more clearly than he had before.

Asahi is able to spike past two blockers but the Ohgiminami libero, Shun Yokote, is able to receive and get the ball up. As he waits for the set, Tsukishima deduces that the Ohgiminami players never use a fast attack if the receive is off and correctly guesses the ball will be sent to the left. He and Kageyama are able to block the spike and gain another point. Takeda notices how the team seems to be less hesitant about their moves. Ukai explains it's from the players having played so much against different powerful teams that utilized different methods, such as serve and spike strength and different methods of attack and defense. With that, they had gone up against teams of a higher level than themselves, the Karasuno players have become used to seeing different plays.

Kageyama next serves and gets an ace when Tazawa is unable to receive, bringing Karasuno to set point. Towada is in disbelief that his team is facing another powerful team and recalls the previous tournament when they had faced off against Shiratorizawa. Even though there was a huge point difference in the second set, the previous Ohgiminami captain, Noboru Akimiya, tried to keep the team going even though it was obvious they felt certain they would lose. Despite Yokote having been able to get the ball up and Akimiya calling for Towada to get the next hit, Towada felt there was no point in delaying their loss and didn't give chase. Akimiya instead chases the ball but is unable to reach it and Shiratorizawa won in the end. Later when Akimiya is retiring from the team, he encourages the remaining players to do their best but later is found crying in the team changing room by Towada.

Back in the game, Towada attempts to land a spike but Nishinoya is able to receive. Hinata then rushes to the opposite side of the court and lands a spike before any of the Ohgiminami players can attempt to save it and wins the set for Karasuno. Towada now sees that Hinata had been serious in his earlier statement of claiming Karasuno would defeat everyone they faced and make it to nationals.

Between the sets, the Ohgiminami coach tries to encourage the team when the Akimiya suddenly appears. He taunts the team for seeming to always be able to pick fights but suddenly turn into chickens when playing volleyball, angering the players at his tease. Akimiya tries to encourage the team to give it everything they have and that trying hard is not as lame as they think. Towada then surprises the team by declaring they should not worry about their image so much and declares they will beat Karasuno and Shiratorizawa, though his teammates immediately begin to tease him for his sudden boldness and declaration.

The game soon continues and Karasuno once more gains a large point lead. Hinata lands a spike and Karasuno is now three points away from winning the game. In the stands, Takahashi continues to be impressed by Hinata and Kageyama's skills while Ikkei notices that the second and third years are playing better than he had last seen. He recalls how he had trained many of them the previous year but had felt that the team had become accustomed to losing despite their skills and dedication. He reveals that the third-years had been part of the team from the start even though Karasuno was no longer considered a powerhouse school and what they had believed the team to be was actually different in reality. Ikkei believes this is part of the third-years strength as they had been able to make it this far without losing hope.

Asahi lands a spike and brings the score to a ten-point gap. When Kageyama serves and Yokote is unable to receive, Karasuno is now at match point. Towada now sees how the lack of practice results in their defeats so quickly. Kageyama serves again and Yokote is able to successfully get the ball in the air. As he watches the ball, Towada once again believes that he will not be able to reach it in time and because he is a second-year he will still have another year to look forward to. At that moment, he then charges for the ball while scolding himself for this way of thinking and it being the reason they stay weak.

In the hallway, the Ohgiminami are reflecting on their loss when Akimiya approaches and praises how they gave it their all in the end. He advises them that feeling regret at being defeated is natural and any team will dislike it no matter much or how little they practiced. Akimiya warns them that if they continue to think of 'there's still next year', their three years of high school will be gone before they know it and the best they can do is to try to practice harder. As he turns to leave, Towada suddenly bows and thanks Akimiya for all he had done for them. The rest of the team copy his actions and Akimiya smiles down at them.

While waiting for their next match, several of the Karasuno players watch the current game and many are overwhelmed at the size of the tallest player on the team and watch as he is able to land the winning point with no problem. While Daichi tries to encourage the team, Yachi reflects how a single loss will mean the end for the team. At that moment, Yūdai Hyakuzawa of the Kakugaga High Volleyball team walks past them and his height of 6'7" terrifies Yachi and Hinata.

Yamaguchi and Tsukishima instantly compare Hyakuzawa's height to Hinata's, angering the middle blocker when they point out the sixteen-inch difference and how he would need something like a blackbelly lantern shark in order to make up the height difference. Kageyama soon notices Hinata becoming nervous at the thought of facing Hyakuzawa. As the team heads onto the court for their warm-ups, Yachi asks Kiyoko if she believes Hinata will be alright. Kiyoko answers that Hinata will be fine and says his nervous behavior is nothing out of the ordinary.

Ikkei and Takahashi watch as the teams enter the court and Takahashi believes that Karasuno will be able to win based on how they have been playing so far. Ikkei is uncertain, pointing out how teens in high school are not at their full height and having a star ace or a player with great height can mean the difference between victory or defeat.

As the game begins, Ikkei questions how the Karasuno team will handle facing Hyakuzawa.

Retrieved from "https://haikyuu.fandom.com/wiki/Match_Begins!!_(Episode)?oldid=95495"
Community content is available under CC-BY-SA unless otherwise noted.