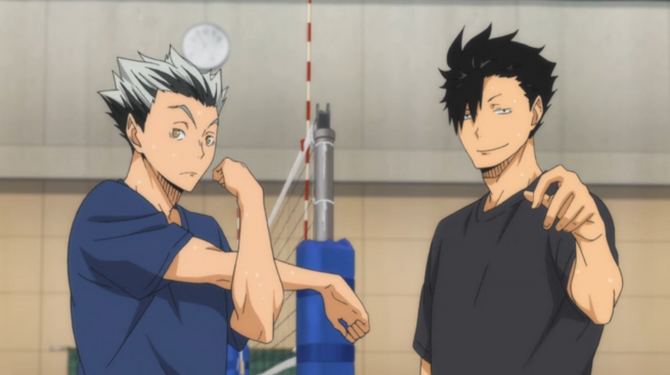 "Moonrise" (Japanese: の, Tsuki no De) is the seventh episode of Haikyū!! Second Season, based on the manga Haikyū!! by Haruichi Furudate. The episode premiered on November 15, 2015.

Karasuno arrives at Saitama for the training camp. They practice against Fukurōdani, and Hinata realizes that Kageyama's tosses have changed so now the latter will have to work harder in order to hit them. However, the two first-years aren't the only ones who are trying new moves, and the other schools recognize their efforts in doing so.

The Karasuno team meets at the school at midnight ready to depart to Tokyo for the summer training camp. Hinata is excited about leaving at such a time and is mocked by Tsukishima for being 'a simpleton who can fall asleep anywhere'.

When the team arrives at Shinzen High School, they are greeted by Kuroo and Kenma. Hinata, like Tanaka and Nishinoya had done during the previous camp, mistakes a steel tower for Tokyo Tower, leading Kuroo to question Daichi if they have steel towers in Miyagi due to always confusing them with Tokyo Tower. While Hinata and Kenma are talking, they are approached by Lev who greets Hinata and asking if he had grown at all. Hinata replies this is rude and it wasn't possible for him to grow much in two weeks before Lev informs him that he himself had grown 2mm; shocking Hinata.

Later the team is ready to start their practice matches and are first paired to go against Fukurōdani. As the game progresses, Karasuno begins to try their new weapons but each one fails. The other teams have noticed that Karasuno is trying new attacks and Coach Nekomata states that, as crows, the Karasuno players are surely going through a period of growth by using the strengths of those around them, with the one exception being Tsukishima who does not seem to be putting in much effort. Fukurōdani eventually wins, resulting in Karasuno having to do the penalty of running up a steep hill behind the school. After the run, Hinata and Tadashi watch the match between Ubugawa and Shinzen and observe Ubugawa perform the serve and block technique.

After the matches are done, Yamaguchi invites Tsukishima to practice serves but Tsukishima turns down the offer claiming they already practice too much and leaves. On his way to go to bed, Tsukishima passes the third gym and is asked by Kuroo to perform blocks for him and Bokuto. Tsukishima replies that he is done with practicing for the day and asks why no one else from Fukurōdani will offer to block for Bokuto. Akaashi explains that no one on their team will block claiming that Bokuto's spiking practices never seem to end and Kuroo cannot as he has been training Lev to receive better. The Nekoma captain says that Bokuto will be good practice for Tsukishima as he is one of the top five aces in the nation and makes a jab at Tsukishima to practice his blocking. Tsukishima quickly falls for the taunt and follows them into the gym.

During the spiking practice, Bokuto continues to ask for more sets with Tsukishima blocking. Tsukishima tries to block a straight but Bokuto is able to get by and score. Kuroo then offers to block as well and advised Tsukishima to try to keep the straight shot in check. When Bokuto attempts to spike, Kuroo is able to easily block and seems to impress Tsukishima in the process. Bokuto then states that, despite being good, Tsukishima's blocks feel 'weak'. This angers Tsukishima who replies that he still has room to develop and grow, annoying Bokuto by pointing out their height difference.

Kuroo then warns Tsukishima that unless he starts getting serious he will be surpassed by Hinata. This apparently strikes a nerve with Tsukishima who grows quiet at the jab before stating that there is a large difference between himself and Hinata when it comes to potential. The conversation is halted when some of the Nekoma players arrive and Tsukishima takes the chance to leave.

Akaashi and Bokuto make fun of Kuroo for upsetting Tsukishima. Kuroo admits he did not mean to and was unaware of how Tsukishima would react. When Bokuto asks what he means, Kuroo explains that Hinata is very well someone to be considered a serious threat despite his short height and lack of experience and that Tsukishima, despite being taller and smarter, seems to already consider himself inferior to Hinata.

After retrieving his forgotten kneepads at the gym and observing his team continue to practice, Tsukishima questions how they are able to put so much effort into something he sees is just a club and something that will just hurt them in the end.

The next day, Karasuno repeatedly loses matches and runs numerous penalties. After one run, the teams take a break when the team managers announce that watermelon had been donated by several Shinzen parents. During the break, Kuroo finds Daichi and apologizes for upsetting Tsukishima the previous night. Daichi questions what happened and Kuroo explains that he warned Tsukishima of being outdone by Hinata unless he began to work harder.

Asahi reveals that Tsukishima had shown signs of feeling inferior to Hinata as he recalls how Tsukishima described how Hinata is the one to 'deal out the damage' while he just 'holds down the fort'. Tanaka also tells them of a conversation he had with his sister, Saeko, of a player she remembered on the volleyball team back when she was in school who had the same last name as Tsukishima.

Daichi guesses this person may be Tsukishima's older brother but Tanaka is uncertain and thinks it may have possibly been another person who had the same last name. The break ends when Sugawara announces that the matches are starting again.

After losing against Nekoma and running the penalty lap, Tsukishima and Tadashi take a break with Asahi. Tsukishima wonders how Asahi feels when he points out that Asahi may be eclipsed by Hinata. While Asahi admits that he does feel a little nervous about Hinata still wanting to become the ace, he instead uses it as motivation to continue to grow stronger and that he and Tsukishima are the ones noticing Hinata's growth more than anyone else as they are the closest to being his rivals. Asahi vows that he will not be beaten by Hinata.

The next day, Ukai notices how Tsukishima is not putting in as much effort as everyone else and says that, despite Tsukishima being the tallest player, he is unsure he can keep him as a regular if he continues to be outplayed by others.

As the game continues, Daichi and Nishinoya accidentally run into each other when trying to receive a ball though no harm is done. Yachi notices how the boys are more into the game than they ever have been before. Kiyoko agrees and adds that when they become too focused it can sometimes be frightening as it could sometimes lead to accidents such as when Hinata and Asahi collided.

Karasuno receives a spike and the last hit is sent to Asahi but is a bit short. Hinata sees this and prepares to go for the ball but stops and looks over to Asahi who is emitting an aura that he will be the one to get the ball. He successfully spikes the ball past the Ubugawa blockers. Karasuno eventually loses. During the penalty lap, Tsukishima stops midway to catch his breath. Tadashi asks if he is alright and Tsukishima answers that he is and for Tadashi to go on ahead.

After the lap, the teams are now free to practice and Tsukishima is approached by Bokuto and asked if he would be willing to block for him again. Tsukishima turns down the offer and walks off, followed and questioned by Hinata who had overheard the conversation. After Tsukishima refuses to answer Hinata's question of turning down the chance to practice with Bokuto, Hinata complains to Tadashi that Tsukishima is wasting a valuable chance.

Tadashi takes this chance to ask Hinata how he would talk to Tsukishima, in the same manner he had talked to Kageyama and Yachi. Hinata replies that he wouldn't say anything to Tsukishima since he doesn't know if he actually cares about volleyball. Tadashi says that Tsukishima wouldn't have joined the club if he hated volleyball.

The episode finishes with Hinata asking Tadashi what he would say to Tsukishima.

Retrieved from "https://haikyuu.fandom.com/wiki/Moonrise_(Episode)?oldid=92995"
Community content is available under CC-BY-SA unless otherwise noted.