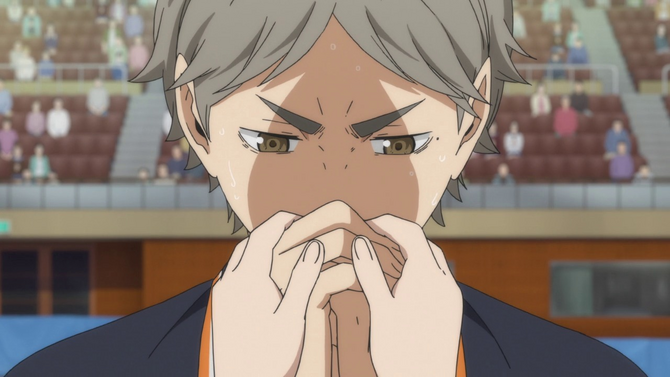 "Obsession" (Japanese: こだわり, Kodawari) is the seventh episode of Haikyū!! Karasuno High School vs. Shiratorizawa Academy High School, based on the manga Haikyū!! by Haruichi Furudate. The episode premiered on November 18th, 2016.

With Kageyama resting for a bit, the fifth set will be starting with Sugawara as the setter. As he feels the pressure of finally entering the match, Kiyoko tries to calm him down. On the other side of the court, Tendō reminisces his first year on Shiratorizawa, his moments on the volleyball club, and his childhood memories which made him nurtured his current skills in volleyball. As the game carries on, an unfortunate incident happened which led Karasuno into a pinch.

At Shiratorizawa's bench, Washijō tells the team that if they play badly, he'll make them sprint home, making Tendō tell Goshiki that he actually did when he was a first-year. But Washijo states that he's confident in the members he has chosen. At Karasuno's bench, after Ukai says that Sugawara is the starting setter in order to allow Kageyama to rest, he starts to get nervous. However, when Kiyoko holds Sugawara's hands, he instantly starts to blush, making Daichi, Asahi, Nishinoya, and Tanaka jealous of him.

Before the fifth set starts, Oikawa and Iwaizumi comment on the setter change: making Kageyama rest up for the next half of the set. On the court, Tendō calls the third year setter boring, but as Sugawara sighs, Asahi states that Sugawara can set the ball to him, making Sugawara tease him for his reliability and acting like an 'ace'.

The set begins with Goshiki serving. Tanaka receives it, and Sugawara sets to Asahi, scoring the first point of the set for Karasuno. In the stands, Yachi mentions that the fifth set only goes up to 15 points, making Saeko shocked. As Akiteru points out that the fifth set goes by in a flash, Shimada and Takinoue reassure them that Sugawara is a solid setter, but even them two hope they're not wrong.

In the next rally, Ushijima scores, as he hits the ball off of Asahi's block, making the ball crash into the score table. With Sugawara feeling the pressure, Kawanishi serves and Daichi receives it. Sugawara sets the ball to Tsukishima, but Tendō blocks it, sending the ball back. As Nishinoya receives it, Tendo reads Sugawara that he will send the ball to the left. Though his read is correct, when Asahi spikes the ball into Tendō's block, the ball lands out of bounds. Tendō tries to provoke Sugawara for being easy to read, but Sugawara brushes it off, stating that their left side is strong. Asahi serves next, with Reon receiving it and Shirabu doing a one-handed set. As Tendō's spike hits the net, Sugawara makes the first touch but shouts to Nishinoya. As Nishinoya goes to set the ball, the team does a 5-man synchronized attack.

A flashback is shown to the week-long training camp. When Nishinoya asks Asahi and Tanaka to hit his sets, Sugawara asks if he can join in, but not to set. Back to the match, Nishinoya sets the ball to Sugawara, who spikes and scores a point, shocking everyone and proving Shimada and Takinoue wrong. As the team celebrates, Tendō has a flashback to when he was scowled at by a female coach, for always jumping on his hunches and that there's a limit to individual skill. Tendō responded that he's scored a lot of points just on his hunches and if it doesn't feel good, why do it. As Tendō walked past the equipment room, he overheard two people talking about how practice always ends when Tendō's around, and that he's also scary. At Shiratorizawa, Tendō told Coach Washijo that he just wants to play volleyball that makes him feel good, but Washijo doesn't care, as long as Tendō can score points, that's all that matters. As Tendō sings his song in a sinister manner, a brief flashback is shown of him when he was little, and the other children would make fun of him.

In a flashback, at Shiratorizawa's cafeteria, Tendō talked to Ushijima about a movie and if he'd seen it. Reon and Semi overlook their conversation and commented that Tendō's the only one that can have an enthusiastic conversation about a movie with Ushijima. When Tendō asked Ushijima how he got into volleyball, Ushijima told him that his father taught him. Another flashback is shown to the Ushijima residence. When Ushijima's mother said it would be better to correct Ushijima's left-handedness, his father defended him, saying that since Ushijima's different to others, it will be his strength. When Tendō questioned if Ushijima's father was a volleyball player, he said yes. He was in the second league but retired due to injuries. Ushijima told Tendō that his father's name is Takashi Utsui, and the reason it's not Ushijima is that he married into his mother's family. But since his parents divorced, his father was overseas and he doesn't see him. Tendō asked if Ushijima becomes a star, will his father watch him? When he responded with perhaps, Reon said that during the time of Ushijima's father, Shiratorizawa dominated nationals, leading Tendō to question if Ushijima wanted to be like his father. Ushijima denied but remembered back to when he was practicing with Utsui. As they practiced, Utsui told Ushijima about the ace on his team, that he was someone you wanted to toss to, as he wouldn't disappoint you. That's the person Ushijima wanted to be like.

The flashback ends and comes back to the match, when Sugawara scores. On the bench, Kiyoko sees Kageyama's reaction and asks him if he can do that as well, but he replies that he hasn't practiced it with Nishinoya yet. As a timeout is called from Shiratorizawa, Washijo shouts at the team to take the points back. After that, Reon tells Ushijima that Karasuno is pretty reckless with that synchro attack. When Ushijima responds that he's never seen that attack before, Tendō comments that Ushijima's impressed with that, but he doesn't like Karasuno's #10. Tendō further states his reason is that #10 is difficult for him to understand and those things are scary for him. Ushijima denies it, so Tendō rephases it, saying that it's creepy for Ushijima and that it's a new feeling for him.

The timeout ends and with Asahi up to serve, he hits the net and gains a point, as Reon is unable to save the ball. With the score at 4-1 to Karasuno, Asahi does another serve. Goshiki receives it but their formation is a little messy. Shirabu sets the ball to Ushijima, who scores past the triple block. A small flashback is shown again to when Utsui defends Ushijima, saying his left-handedness will be is strength. Now that Ushijima's up to serve, he gets a service ace when Asahi is unable to receive it. With another powerful serve, Daichi and Asahi keep the ball in play. For the last touch, Sugawara sets the ball over to Shirabu. As Tendō goes for a spike, he changes this motion into a set towards Ushijima. Nishinoya gets ready to receive it but gets shocked when Ushijima spikes it to the other side. Ushijima remembers Utsui's words about joining a strong team. Once he becomes stronger, he can play against other strong opponents who will make him stronger as well. A flashback is shown to young Ushijima and Utsui practicing again, as Utsui tells Ushijima that if he likes volleyball, that will make him happy. When Reon compliments Ushijima's spike, he quotes Tendō's words "I'm starting to get into it," shocking the team.

Ushijima gets a no-touch service ace, turning the score to 5-4 to Shiratorizawa. For his next serve, Asahi, Daichi, and Sugawara keep the ball in play, leading Yamagata to receive the chance ball. Shirabu sets the ball to Ushijima in the back, but Tsukishima gets a one-touch. However, Nishinioya fails to get the ball. Ukai explains Tsukishima's style of blocking and how it can be annoying. Knowing a wall is always in front of you it can lead to stress over 5 sets. Ushijima's next spike hits the net, but Daichi saves it. With a chance ball to Shiratorizawa, Tendō does a quick attack but gets blocked by Tsukishima. With another chance, Reon spikes the ball, but Tsukishima continues to get a one-touch on his spike, making Hinata comment that Tsukishima looks like Aone. Nishinoya receives the chance ball, but when Suga gets the ball, Tendō reads him that he'll send the ball to the left, as there's a blocker in the middle. Tanaka spikes but Yamagata receives it. As Tendō shouts for another one, Akiteru thinks about how much concentration Tsukishima has this late in the match. As the ball goes to Ushijima, Tsukishima gets ready to block him, but Ushijima spikes the ball past the block to the side. As Daichi doesn't receive it, Goshiki celebrates, but the ball is out. When Saeko questions if it was luck, Shimada excitingly says it wasn't. It just shows how good their blocks were as it was forcing Ushijima to dodge it. However, it was overruled, as the ball just barely touched the line.

On the side, Yamaguchi and Kageyama notice something's wrong with Tsukishima's hand. With Tsukishima pulling a painful face, Ukai and Takeda run onto the court to see Tsukishima's hand bleeding around his pinky finger. Ukai says it must have been when he touched Ushijima's spike and calls for Narita. Tsukishima starts to think about the next possibilities of the match as Kiyoko gives him a towel. Iwaizumi and Oikawa comment that with Tsukishima leaving this late in the game will be hard for the team. Before Tsukishima leaves, he yells at Hinata to buy him some time, but Hinata responds that they'll be going to nationals by the time he returns. On the court, the rest of the team reassure Narita.

Outside the gym, Tsukishima and Kiyoko meet Akiteru and Yachi. When Akiteru says that Tsukishima won't die, he comments saying that he's pretty useless when it matters the most and says he's pretty exhausted, so it's fine. But when he walks off, he shows he's in a lot of pain. Akiteru tells Tsukishima to believe in his team, with Kiyoko pointing out that he won't come back to see the team lose. Back on the court, Daichi remembers how much pain Tsukishima was in, so the rest of the team become more determined. As Ushijima serves, Daichi receives it and Sugawara sets so Narita, but Tendō blocks it. With Sugawara getting the first touch, Nishinoya goes for a set. Sugawara thinks that he hates dumps and spiking because he's scared of doing things outside his job. But you can't win without taking risks, so Karasuno does another synchronized attack. After the ball is set, the scene changes, showing a flashback to a young Tendō being bullied by the other kids on the volleyball team. As Sugawara spikes, he gets blocked by Tendō and gets complimented by Reon. The scene changes back to the flashback, showing Tendō blocking one of the boys that were bullying him. When he saw the boy's expression, it looks the same as Sugawara's expression, making Tendō think that he couldn't be satisfied with just one-touches, and starts to smirk.

Retrieved from "https://haikyuu.fandom.com/wiki/Obsession_(Episode)?oldid=95922"
Community content is available under CC-BY-SA unless otherwise noted.