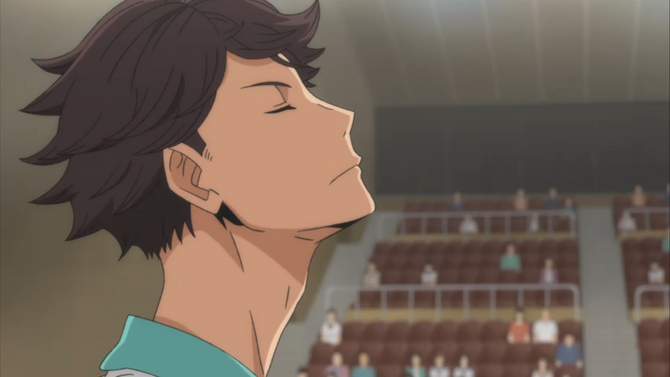 Oikawa Tōru is not a Genius (Japanese: はではない, Oikawa Tōru wa Tensai de wa Nai) is the twentieth episode of the Haikyū!! series, written and illustrated by Haruichi Furudate and published in the manga magazine, Weekly Shōnen Jump. The episode premiered on August 17, 2014.

Aobajohsai starts to overwhelm Karasuno and builds a huge point gap. Things get even worse when Oikawa figures out the secret signals Kageyama and Hinata use for their quick strike, and Kageyama begins to panic. This ruins his momentum as he goes too fast with his tosses while Oikawa continues taking point after point. With no timeouts left for this set, Ukai has no choice but to sub in Sugawara.

In a flashback, Kageyama thinks back to when he got into Kitagawa Daiichi. There was an amazing player there: Oikawa. Back then, Kageyama always thought to himself that if he could surpass that person, he would be the best setter in the prefecture.

In the present, Kageyama pulls off a dump, shocking everyone. Hinata compliments him and Kageyama replies that Oikawa is the best overall player in the prefecture, but he won’t lose when it comes to being a setter.

It’s Kageyama’s turn to serve, but his ball ends up going out and it becomes Oikawa’s turn to serve. The ball seems to head towards Nishinoya, but it goes to his right instead. Despite that, Nishinoya still receives it. Kageyama gets the ball and Hinata calls for it. The two perform their infamous quick strike and scores. Oikawa watches intensely, seeming to notice something.

Kindaichi apologizes for messing up and Oikawa brushes him off. He then asks how Kindaichi feels about Hinata stealing his spot as Kageyama’s partner. Kindaichi tries to protest that he doesn’t care, but Oikawa cuts him off and states that he’ll prove Kindaichi’s skills without the use of quicks like Kageyama does with Hinata. He tells the first year to believe in him and just jump.

Kindaichi goes to spike the next move and Hinata tries to block him, but realizes that Kindaichi seems to jump higher than he did during the practice match. Kindaichi scores and Karasuno prepares for a comeback. As Kageyama starts to toss, Hinata calls for it, but Kageyama sends it to someone else. Oikawa watches with the same expression before smiling, stating that he figured it out. Aobajohsai quickly calls a timeout.

As his teammates are crowded around him, Oikawa explains how Kageyama and Hinata know to do the quick strike and the signals they use. When it’s the quick strike, Hinata would yell “bring it” and with a normal toss to another player, it’s “send it”. To test it out, when Hinata yells “bring it”, one blocker is going to focus on him. If it’s “send it”, they will wait to see where the toss goes. Iwaizumi notes that if they call a timeout this earlier, Karasuno may know that they’ve figured out the signal and Oikawa replies that it’ll be better that way. If Kageyama knows this, he’ll start panicking.

On Karasuno’s side, Tanaka and Nishinoya tease Kageyama for looking so serious, as the first year suspects that Oikawa has figured out the signals. To lighten up the mood, Tanaka compliments Nishinoya on his receive and Nishinoya replies that Oikawa is strong, but that’s not the only thing. They’ve underestimated Aobajohsai this entire time by assuming that Oikawa’s the main problem.

The match resumes and Oikawa hints at Kindaichi to aim his serve at specific people. The serve goes towards Asahi and he misses his receive. This continues for a little bit until Asahi finally gets used to the trajectory. Hinata then spikes and scores, but Aobajohsai’s still four points ahead.

Aobajohsai starts focusing its blockers up front and Kageyama notices the pressure. With Hinata in the back, Kageyama panics and moves to do a setter dump, but this is seen through by the opponents and he gets blocked. Hinata soon moves up front again and calls for the ball with “send it here”. Iwaizumi and Kindaichi notice and wait to see where the toss goes before jumping, almost blocking Hinata.

Kageyama goes to serve again but due to his loss of composure, he messes up and only barely manages to turn it into a soft serve at the last second. The ball is received and sent back to Karasuno’s side, but Kageyama ends up receiving it. Tanaka goes to spike and gets blocked completely. Things seem bad on Karasuno’s side as it becomes Oikawa’s turn to serve again.

The ball goes straight towards Tanaka, who fails to receive it. Oikawa thinks to himself that if Tanaka fails to receive the ball continuously, he’ll lose his morale. If he can break the spirits of both Tanaka and Asahi, the essence of Karasuno’s offense, it’ll be the end for the opponents.

Ukai quickly calls a timeout. He warns Kageyama not to lose his cool and be careful with his tactics, like the dump. The match resumes and this time, Tanaka receives the ball. However, it goes straight to Kindaichi, who slams it down. Tanaka then tries spiking but gets blocked. Ukai calls another timeout, using up the two timeouts of the set.

As Tanaka’s heading off the court, the spectators wonder if he’s going to be alright after going through all of that. To their surprise, Tanaka suddenly slaps himself. He apologizes to the team and admits that he didn’t call the toss just now because he got scared. Angrily, he yells that he won’t let down the team again.

After the timeout ends, the players go back into position. Oikawa aims his serve at Tanaka again and Tanaka receives it barely with his stomach. Hinata saves it and Kageyama sends it back over towards Oikawa. However, Watari’s able to set the ball, surprising Ukai. Despite this, Nishinoya receives the ball perfectly and Kageyama gets ready to toss it. Tanaka loudly calls for it and jumps, slamming the ball past Kunimi and scoring, effectively stopping Oikawa’s momentum.

Hinata goes for the freak quick strike and Iwaizumi tries blocking it. He lands and yells at Oikawa not to say that he can’t toss like Kageyama. Oikawa admits that he can’t, but he can give the best tosses to the people on his team. This is why he won’t lose as a setter.

With a seven-point gap, Kageyama starts thinking of ways to catch up and sends sharper tosses than usual, showing his agitation. Oikawa watches him wordlessly, thinking to himself of an event from junior high. He remembers Kageyama’s nickname of “King of the Court” and admits that he thought it was praise initially, but soon realized its derogatory meaning after seeing a match. Kageyama has power and talent, but not the teamwork. This flaw is not something he can't fix in just two months.

Karasuno’s attacks start getting faster, but Ukai can’t do anything about it as he’d already used up all his timeouts. Oikawa notices and thinks to himself that with this acceleration, Kageyama won’t be able to accommodate his different teammates. A setter is the player who brings out the maximum potential of his attackers. Without that skill, Kageyama won’t succeed.

The ball soon goes right over the net and the two setters jump simultaneously to push it over. In his panic, Kageyama loses control to Oikawa, worsening his agitation. He ends up making a mistake with his toss, but Asahi saves it.

Irihata watches the two setters and compares them, noting that Oikawa is not a genius like Kageyama. He’s skilled, but not at his level. Despite that, it’s obvious that at the current stage, it’s Oikawa who excels at being a setter.

Retrieved from "https://haikyuu.fandom.com/wiki/Oikawa_T%C5%8Dru_is_not_a_Genius_(Episode)?oldid=95187"
Community content is available under CC-BY-SA unless otherwise noted.