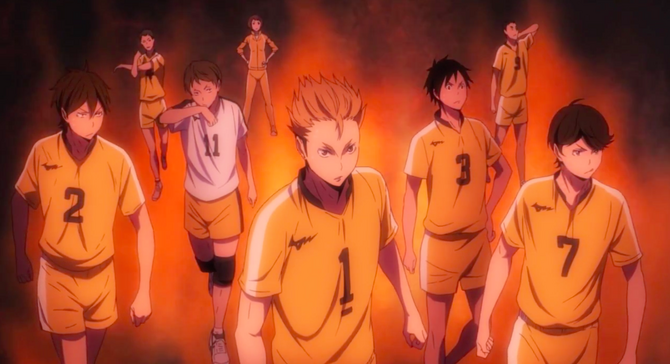 "Playground" (Japanese: アソビバ, Asobiba) is the fifteenth episode of Haikyū!! Second Season, based on the manga Haikyū!! by Haruichi Furudate. The episode premiered on January 16th, 2016.

Karasuno arrives at the stadium to play their game against Johzenji High. They win the first set, but expect the next set to be harder because Johzenji takes many risks and are unpredictable.

Daichi informs Ukai and Takeda that Karasuno will be serving first after Johzenji chooses to receive. Once Daichi leaves to join the rest of the team, Takeda notices how some of the players, especially the third years, seem more nervous than normal.

Hinata openly admires Tsukishima's new sports glasses, but the taller blocker is displeased by Hinata's praise since it makes him feel less cool. Tsukishima recalls the moment his brother, Akiteru, gave him the new glasses and told him that face blocking will no longer be frightening, to which Tsukishima argues against. As the teams line up, Hinata is reminded of Terushima saying how fun a match between their teams would be.

The game begins with Asahi making the first serve. Johzenji barely receives the ball and almost sends it out of bounds until Terushima performs an incredible aerial turn to spike the ball over from the back end of the court. The amazing spike earns Johzenji the first point while leaving Karasuno in shock of Terushima's unconventional play style.

In the next rally, Johzenji receives Tanaka's spike but accidentally drives it into the net. Futamata, unable to reach with his arms, instantly switches to using his foot to send a toss high enough for Īzaka to spike and score from. On the sidelines, Sugawara and Ennoshita note that Johzenji feels like a 'superstar baseball team' with unpredictability as their greatest weapon.

Afterward, Bobata accidentally sends his serve into the net, giving the point to Karasuno. The rest of the team remain upbeat and cheerily joke with Bobata while telling him not to mind his mistake. The referee issues a whistle warning after seeing Johzenji's rowdy behavior, prompting Johzenji's manager, Misaki, to instruct the team to hurry and return the ball back to Karasuno.

Tsukishima serves and Johzenji pulls off a normal quick attack. Futamata's following serve results in a lucky net-in. Tanaka dives to save the ball at the last second but sends it flying toward the back. Hinata jumps high and successfully follows up. Just when it seems like he's going to crash into the wall, Hinata skillfully maneuvers his body to jump off the wall, earning him the label "spider-man" from awed bystanders. Nishinoya returns the last hit and scores after the ball lands inbound at the backside of Johzenji's court.

In the stands, Date Tech's Aone and Futakuchi are watching the game. Futakuchi remarks that Karasuno's save is impressive but they have yet to use their special quick attack. Kageyama serves next. Johzenji receives and spikes back. Kageyama lands a touch but sends it flying back to the opposing side. Johzenji attempts a direct spike, and Daichi makes a clean receive. Kageyama and Hinata then unleash their new quick attack, impressing fans and players alike. After receiving a painful high ten from Kageyama, Hinata is advised by Daichi to keep calm and not to fret over Johzenji's unpredictable movements. Takeda is relieved to see Daichi properly guiding the team while Terushima intently stares at Daichi.

After Asahi scores another point, Aone and Futakuchi are joined by their teammates, Obara and Sakunami, on the stands. They notice that Johzenji is a troublesome opponent despite being a disorderly bunch; their blockers jump everywhere and easily fall for decoys. Date Tech's libero, Sakunami, reveals that he heard Johzenji frequently practices in a 2-on-2 format, leading players to develop a tendency to attack and not rely on others. At that moment, two Johzenji players collide from trying to get the ball at the same time.

In the following rally, Tsukishima attempts to predict the next possible attack but is caught off guard when a player from the back row sets the ball for the setter to spike from. Johzenji scores and ties up the game. While watching from the reserved player area, Hinata and Yamaguchi come to the realization that Johzenji's strength comes from having fun.

Hinata executes another quick attack after being rotated in. When Kageyama attempts to block Futamata from spiking, the ball collides directly with his face. Although the blocking attempt is successful, Kageyama ends with a nosebleed. Takeda calls for a time-out. Daichi and Ukai tell Kageyama that he will need to sit out until the bleeding stops, much to Kageyama's annoyance. Yamaguchi volunteers to escort Kageyama to the medical office while Hinata declares that he will keep things under control until Kageyama's return. Begrudgingly, Kageyama leaves the game while Sugawara enters as his replacement. Soon, the players from Date Tech are surprised to see Hinata switched out with Narita. Futakuchi guesses that Karasuno may be taking this chance to experiment with new tactics and points out that other players are better at basic plays than Hinata, offending Aone in the process. A shocked Futakuchi insists that he was merely telling the truth. Obara reveals that Aone and Hinata have formed an unlikely friendship after playing against each other. To their complete surprise, Aone voices that Hinata is aware of his own limit and hints at the latter's improvement in the near future.

After being switched out, Hinata is advised by Ukai to observe Narita since he has been practicing several combination plays with Sugawara. Immediately after joining the reserved players, Hinata becomes fidgety in wanting to return to the game. When Tsukishima tells him to calm down, Hinata reveals his desire to play and practice even more.

On the court, Narita successfully scores and is praised by the team. Terushima then lands a no-touch service ace by aiming at the back corner of Karasuno's court and celebrates. Tanaka is annoyed by Terushima's pompous attitude until Narita points out that Tanaka is no different. Daichi quickly ends their bickering and tells them not to become distracted by Johzenji's energy.

Kageyama returns from the medical office with the clearance to continue playing. He temporarily joins the reserved players in the waiting area and right away mocks Hinata for boldly declaring that he will handle everything in Kageyama's absence earlier. Hinata replies that he will soon have his chance.

Karasuno next performs the "Sugawara version" synchronized attack. Daichi scores and brings Karasuno to set point. Terushima is amazed by the attack and convinces his team to try it out. Misaki instantly knows what they are up to and grows anxious. Once Johzenji's libero, Tsuchiyu, receives Narita's serve, the team unexpectedly makes their move and sets their own synchronized attack into motion. Futamata sets the ball for Terushima, but Terushima misses, causing the ball to fall on Johzenji's side and giving Karasuno the set win. Everyone is completely stunned except for Misaki and Coach Anabara, who seems more exasperated.

As the teams switch sides, Ukai realizes that Johzenji copied Karasuno's synchronized attack and calls them incredibly reckless for trying a new attack at set point. Takeda observes the Johzenji banner that reads "Simple and Strong" and states how it doesn't fit the current team. Ukai replies that the slogan embodied the team accurately until recently.

Johzenji's coach, Anabara, scolds his team for trying such a play without thinking things through. Terushima insists he believed they could make it work only to be reminded they lost the set because of it. The players then comment on how Hinata matches the Karasuno banner that reads "Fly" before calling their own banner lame. Misaki tries to get them to appreciate their motto but Terushima states it's not very fitting to the current generation. Misaki is saddened by this as she recalls when Anabara first arrived and began making changes to rebuild the team. She remembers how the previous captain once confronted Terushima on what he would do if a situation ever comes up that's not fun. Terushima simply replies that he'll just have fun anyway.

Soon the teams are back on the court with Hinata and Kageyama returning to the starting lineup. Sugawara reminds Hinata and Kageyama to keep cool, but his words fall on deaf ears. Terushima speaks to Hinata before the start of the set, saying he's glad Hinata is back since the game, like Daichi, has been dull. Hinata is confused by what Terushima is saying but proclaims that, while he couldn't beat Terushima one on one, Karasuno as a whole would win.

Once the set begins, Hinata and Kageyama rush into a quick and end up messing up their timing. Daichi, having predicted what was going to happen, saves the ball. Terushima attempts to spike only for Daichi to once again receive and allow Hinata and Kageyama to successfully carry out another quick attack.

When the oddball combo comes to apologize, Daichi patiently reveals that he expected this since the two are overly excited to heed any advice to calm down. Daichi goes on to say that, while he's not good at flashy moves, he can at least create a solid foundation and tells them to play to their hearts' content. Meanwhile, Terushima can't help but notice the similarity between Daichi and the previous Johzenji captain.

As the game continues, Karasuno widens the lead with their various spikes, quick attacks and counters. Johzenji grows frustrated over their failure to block and keep up with Hinata. They begin rushing their plays, which backfires and leads to Karasuno gaining more points. Anabara calls for a time-out, and Terushima encourages the team to keep trying their best. When the others question how to deal with Hinata, Terushima simply answers that they have to try harder.

Standing to the side, Misaki recalls when the previous captain, Seiji Okudake, asked her what she was planning to do in the future regarding the team. As she had not found anyone to become the new manager of the boys' volleyball team yet, Misaki said that she would remain on the team until the nationals. Okudake is not surprised by her answer and goes on to say that the current team plays very well when they are doing good but the complete opposite will happen if their spirits are low. He advises her to whip them into shape despite her protests that the team would never listen to her.

Surprising everyone around her, Misaki raises her voice and berates the team for solving everything through enthusiasm alone. She mentions that there will certainly be moments when things are difficult and accuses those who still try to have fun in those situations weirdos. Anabara questions if she is alright, taken aback by her sudden boldness. In response, Misaki says that someone needs to point out the team's weakness and she was instructed by Okudake to "smack their asses into gear". The players are stunned by her word choice. Terushima finally admits that the current situation isn't any fun and that Karasuno is playing more freely than they are. Misaki encourages them to toughen out the times when it's not fun and to think while playing.

Hinata overhears part of the conversation, most of them speaking of 'asses'. Kiyoko asks if he is alright only to be approached by Tanaka and Nishinoya. Although unsure why, the two feel they need to be scolded and ask for Kiyoko to spank them. She immediately refuses but the two are flattered anyway.

As the next set is about to begin, Hinata notices a change in the behavior of the Johzenji team.

Retrieved from "https://haikyuu.fandom.com/wiki/Playground_(Episode)?oldid=95618"
Community content is available under CC-BY-SA unless otherwise noted.