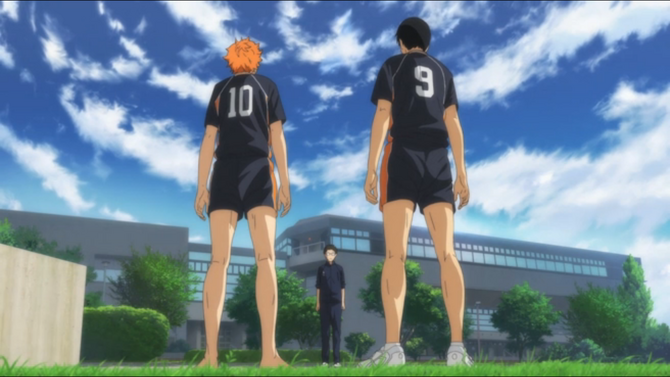 Removing the Lonely King (Japanese: ・"の", Nugu "Kodoku no Ōsama") is the twenty-fourth episode of the Haikyū!! series, written and illustrated by Haruichi Furudate and published in the manga magazine, Weekly Shōnen Jump. The episode premiered on September 14, 2014.

Kageyama matches Oikawa point for point as the teams become dead even. The long sets take a toll on both teams' energy and Kageyama starts to notice a change in a former teammate's attitude towards volleyball. It soon becomes clear to him the difference in his and Oikawa's abilities but just as he begins to despair, Hinata reminds him that he belongs on Karasuno now. Oikawa acknowledges that Kageyama has realized what teamwork means and is no longer the Solitary King. However, Aobajohsai blocks Hinata's quick in the end and wins the match.

With this point, Karasuno and Aobajohsai are now both at twenty-four, pushing the game into a deuce. The first one to get a two points lead wins. However, Kageyama seems concerned about something and thinks of Kunimi’s receive from earlier. He remembers yelling at Kunimi for not chasing the ball all the way to the end and wonders about his change in attitude in this game. Hinata interrupts him by yelling that he’s going to do as many broads as he can this game, regardless of any obstacles they may face.

The match resumes and neither side gives in. The ball is kept in play until Hinata messes up his jump, but still manages to score off a feint. The players’ fatigue is beginning to come out, but they continue pushing forward. Karasuno and Aobajohsai are tied when Oikawa goes up to serve.

As he prepares himself, he remembers his bitter defeats in Shiratorizawa’s hands and vows to move forward from this match so he could take his revenge. He can’t afford to lose here. He goes to spike with full power and the ball heads straight to Nishinoya. However, it flies right past Nishinoya’s head and goes out. In return, Iwaizumi takes back a point, exclaiming that they’re even now, impressing his underclassmen and Oikawa.

Both teams take point after point, with neither side topping. The match soon goes over thirty points and both teams appear to be exhausted. Oikawa goes up to serve again and Shimada and Takinoue wonder how he’ll do since he probably still remembers his miss from earlier. Iwaizumi then calls out to Oikawa, reminding him to focus only on the match in front of him instead of reaching for Ushijima.

Smiling confidently, Oikawa accepts the advice and prepares to serve. He remembers how he watched volleyball matches on TV and played with Iwaizumi as kids. As he hits the ball, he thinks back to every memory of him playing volleyball up to now. The ball soars past the net and is clumsily received by Daichi. Shimada is shocked by how perfect this serve is despite Oikawa having messed up earlier.

The ball goes back to Aobajohsai and Oikawa tosses to Kunimi. Kageyama’s surprised by Kunimi’s sudden interest in playing and he remembers a time in junior high when he yelled at Kunimi for not putting in full effort. Kageyama realizes that Kunimi still has energy left as Kunimi prepares for another attack. Oikawa goes to toss again, revealing that Kunimi’s weapon comes out to full use when everyone else is exhausted. He gives the ball to Kindaichi, who scores.

Kageyama watches Aobajohsai celebrate, shocked to see Kunimi laugh. They’ve been on the same team for three years, but that was the first time he’d seen Kunimi like that. He compares himself to Oikawa, who’s able to bring together the team like that. Kageyama despairs, wondering how he’s supposed to compete against him. Hinata interrupts him, teasing him, as Daichi apologizes to the setter for not getting the ball to him. On the side, Sugawara advises him to stop hesitating and reminds him that this team is strong. Kageyama recovers his composure, knowing that this is the team he belongs to, and with this, he finally lets go of his junior high regrets.

Oikawa watches Kageyama before going to serve. He notes that he might actually lose to Kageyama. However, today is not the day. The ball goes softly and Daichi barely receives it, leaving Kageyama in no position to do a counterattack. The ball goes up and Kindaichi looks at Hinata, noting that he loses when it comes to speed and reflexes. When it comes to height, it’s a different story. Kindaichi gets the ball over first, but Nishinoya receives it.

The ball’s back in the air and Kageyama finds the perfect timing to send it to Hinata. Hinata spikes with all his power, and gets blocked. The ball ricochets off the blockers’ hands and flies to the back. Kageyama, Nishinoya, and Asahi run for it, but don’t make it on time. The ball lands and Aobajohsai wins the game.

Devastated, Hinata and Kageyama lie on the floor. Daichi goes to them and Hinata tries apologizing. Daichi stops him, stating that he didn’t make a mistake. Iwaizumi wonders how Oikawa knew Kageyama would toss to Hinata at the last second. Oikawa replies that Kageyama has just learned to trust his teammates. At a crucial moment like that, it was obvious he would go to the one weapon he’s honed: Hinata.

The two teams line up and after shaking hands, move to the side. They clean up and head outside. Hinata calls to Kageyama as they’re cooling down and Kageyama apologizes for what he did at the end. Angrily, Hinata tackles him to the ground and yells at him to not make tossing to him sound like a mistake. Before Hinata can go further, Takeda approaches them and tells them they did well. Hinata replies that they still lost, but Takeda asks him if losing proves that he’s weak. They will only be weak if they don’t get back up after a defeat. Motivated, the two stand up and face Takeda.

Karasuno prepares to head home, but Ukai takes the members to a restaurant instead. After the food arrives, he tells the players that the matches take a lot of energy and put a lot of strain on their muscles, and they have to eat to replenish their strength and grow stronger. One by one, the members start to eat and cry.

Retrieved from "https://haikyuu.fandom.com/wiki/Removing_the_Lonely_King_(Episode)?oldid=95198"
Community content is available under CC-BY-SA unless otherwise noted.