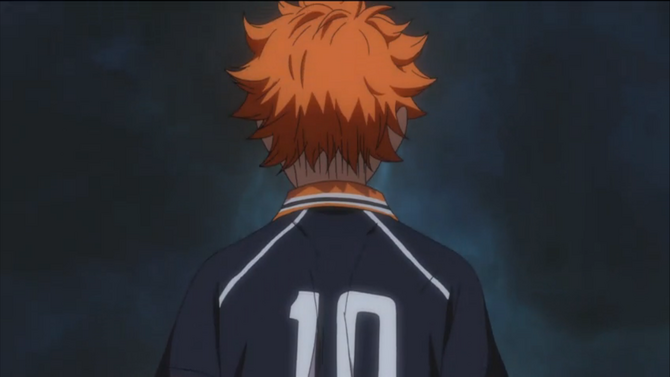 Revival (Japanese: , Fukkatsu) is the fifteenth episode of the Haikyū!! series, written and illustrated by Haruichi Furudate and published the manga magazine, Weekly Shōnen Jump.

The opening of this episode is Ah Yeah!! by Sukima Switch and the ending theme is Leo by Tacica.

The first day of Interhigh finally comes. Karasuno walks into the stadium to rumors about it being "Flightless Crows", but the players are determined to change their reputation. Daichi catches up with a former teammate before they vow to defeat each other. The match between Karasuno and Tokonami begins and Karasuno easily takes the first three points. Kageyama and Hinata unveil their quick strike and Asahi proves his strength as the ace. The match has just begun, but everyone has realized that Karasuno is back and better than ever.

The first day of Interhigh finally arrives. The third years meet up on their way to school and walk together. Asahi starts to say something, but Daichi and Sugawara cut him off. They tell him not to say sentimental things since they don’t need them. They’re going to win their match today and the following matches.

At the stadium, all the competing teams and spectators are waiting at the assembly hall. Tokonami heads in as the members discuss Karasuno. They’re confident about their match since they’ve heard that Karasuno’s only a mediocre team. As they pass the line-ups board, Ikejiri overhears two guys discussing the teams. One of them calls Karasuno by its nicknames and describes it as a declined team. At that moment, Karasuno arrives at the stadium and lines up behind him.

Immediately jumping into action, Tanaka comes between the two guys and tries to intimidate one of them. Daichi easily pulls him away and leaves before Ikejiri could greet him. As the players are entering the gym, they attract other teams’ attention: Asahi for the rumors around him based on his appearance, Kiyoko for her beauty, Nishinoya for his libero abilities, and Kageyama for his status as a genius setter.

As Karasuno enters the gym, it encounters Date Tech. Without warning, Aone points to Asahi wordlessly but surprisingly, Asahi doesn’t back down. Date Tech’s captain runs over and stops Aone with help from Futakuchi. He apologizes and notes that Aone tends to target their opponents’ ace. They leave but warn Asahi to be ready.

As Daichi’s watching the chaos unfold, he’s approached by Ikejiri, who notes that Daichi seems to have changed. He realizes that Daichi has been training a lot harder. Ikejiri notes that Karasuno looks strong before remarking that his own team is puny in comparison. As he’s thinking over this, he corrects himself and exclaims that rumors and appearances don’t matter. What’s most important is victory in their matches.

Elsewhere, Karasuno Girls’ are preparing for its match. The members are worried about the match and note that they probably won’t win since they didn't practice that much. Michimiya replies that they had plenty of time to do more, but now not’s the time to think of that. What they have to do now is go out, play and win.

At the boys’ side, Hinata’s shivering in anxiety and Kageyama worries, remembering the practice match against Aobajohsai in which Hinata caused utter chaos. Sugawara comments that Asahi is cowardly, but he doesn’t seem to be nervous. Asahi replies that he’s only this way because he thinks of all the scary experiences he’s had so far. Hinata tries this trick and remembers Kageyama slapping the back of his own head after Hinata hits a ball into him. This helps tremendously.

Karasuno soon heads down to the gym and begin warming up. At the entrance, Aobajohsai begins heading in. Irihata tells Mizoguchi that he plans to focus on Karasuno until he notices that Oikawa’s missing. When he finds out that Oikawa’s with his fangirls, he sends Iwaizumi after him. Iwaizumi tracks Oikawa down outside and throws a ball at him, intimidating the latter towards leaving.

Aobajohsai walks inside the gym and spots Karasuno right away. The members notice Nishinoya, Asahi, and Ukai, making Irihata wonder how much Karasuno has changed. Soon, Karasuno’s match against Tokonami begins.

Everyone’s surprised that Hinata’s a middle blocker while other taller players are sitting on the bench. Iwaizumi laughs at the confusion as Kindaichi replies that despite his height, Hinata shouldn’t be underestimated.

The ball goes to Kageyama, who sends it to Tanaka, scoring the first point. Asahi then scores the second point, but his excitement is ruined when he hears the spectators talking about the rumors surrounding him. Ukai is happy about the skill the players are showing off, but remarks that Asahi and Tanaka aren’t the only weapons Karasuno has. The ball soon gets sent to Kageyama and Hinata, who perform a normal quick strike.

Hinata flies over the net and slams the ball down before anyone can react, shocking everyone in the gym.

Retrieved from "https://haikyuu.fandom.com/wiki/Revival_(Episode)?oldid=95179"
Community content is available under CC-BY-SA unless otherwise noted.