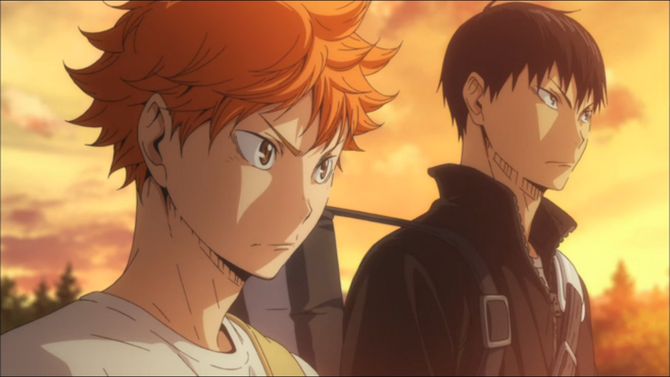 Rival (Japanese: , Kōtekishu) is the thirteenth episode of the Haikyū!! series, written and illustrated by Haruichi Furudate and published in the manga magazine, Weekly Shōnen Jump. The episode premiered on June 29, 2014.

Nekoma and Karasuno play the second set to an epic 25-23 showdown but in the end, Karasuno falls just short. However, the two schools reform a rivalry that is better than time could imagine. The two come to realize they both have similar personalities on their teams, and they both have players with goals and ambitions. Best of all, they realize they are starting to unite as a team. Despite being thoroughly crushed, Karasuno vows to get revenge on the national stage. In the end, Ukai agrees to become the Karasuno's full-time coach.

Kageyama sets the ball to Hinata thought by telling himself to spike it down as powerfully as he can. He ends up missing, but Daichi somehow saves the ball at the last moment. It gets sent to Taketora, but he’s blocked by Daichi, Hinata, and Tanaka.

As the ball falls, Kai rushes in to save it. Taketora tries again and succeeds, exclaiming that despite his average offensive power, he’s still Nekoma’s ace. On the side, Takeda notes that Hinata and Kageyama’s quick-strike isn’t working that well, and Ukai explains that up to this point, Hinata has always relied on Kageyama for that attack. Now, it’s just a normal quick strike, something Hinata can’t keep up with yet. However, if he tones this weapon and has the other quick strike, he’ll become a powerhouse.

Tanaka goes to spike, yelling that the ace is not the only spiker the team goes to when it’s in a pinch. He blows past Taketora and celebrates with Nishinoya, annoying the Nekoma player. On another side, Hinata faces Inuoka and vows to stop him. Daichi steps in and reminds him not to lose his cool.

Taking the captain’s advice to heart, Hinata watches the next play carefully and catches Inuoka sneaking behind Kai. Quickly, he rushes to where Inuoka goes and almost blocks him, surprising the latter. Hinata then runs to the opposite side of the court and while Inuoka is able to catch up to him, Hinata still manages to get the ball past him, scoring a point for Karasuno.

Kuroo is moved to the front and Hinata is immediately intimidated by the taller middle blocker though becomes annoyed quickly when Kuroo calls him 'small fry'. Kageyama then pulls Hinata back and tells him that they’ll do their usual quick strike this time because Kuroo is positioned in the front. Though not completely understanding why, Hinata goes with it and scores easily. On the side, Ukai explains that Kageyama’s decision was a wise choice as Kageyama had seen that a skilled blocker like Kuroo might easily stop a normal quick attack but using the usual quick right away may get past him.

Nekoma starts setting up a play with all the players jumbled up, confusing everyone into thinking one of the front three players would get the ball. They turn out to be decoys so Fukunaga can attack from the back unguarded since the blockers had jumped to block thinking one of the others would attack. The spike hits Hinata and gets sent back to Nekoma's side where Kuroo gets the set and scores the next point. He scores another point when he tricks the blockers with a delayed spike in the next play.

Now that Nekoma is getting closer to match point, Ukai and Takeda are at a loss of what to do next. Takeda notes that Nekoma's plays seem to be through the roof since Kuroo has moved to the front row. Ukai explains that Nekoma has more experience compared to Karasuno since its starting lineup had just been formed and contains mostly first years. Because of this, he admits that there's no way they could win against Nekoma at the moment so he yells at the players to focus on sheer speed and strength.

Motivated now, the players use most of their power and tactics and catch up to Nekoma. However, Nekoma doesn’t give way and soon reaches match point. No matter how much Karasuno attacks, Nekoma’s able to receive the spikes and keep the game going. The ball reaches Kageyama again and he notices Hinata running behind him. He thinks to himself about how Hinata’s most concentrated at the crucial points of a match, as if he’s demanding for the ball. Kageyama tosses to Hinata, who slams it past Inuoka.

The ball’s received by Yaku, but it hits the net. Kai manages to save it but it goes towards the back. At the very last second, Kenma lunges for it and sends it back over to Karasuno. The players fail to reach it in time and Nekoma scores, winning the match.

As Nekoma celebrates, Ukai remarks that they didn’t make any major mistakes. Their best weapons were working as they should, but they couldn’t win because Nekoma is a real team compared to them.

Suddenly, Hinata asks for a rematch and Nekomata agrees cordially. Karasuno plays several more matches, but lose every one of them. Despite that, Hinata continues asking for more until Ukai pulls him away.

The match officially ends and the players are gathered in their individual teams. While Ukai speaks to Nekoma, Nekomata comes over to Karasuno and talks to them about his past with the former Coach Ukai. He recalls the phone call he received from Ikkei about the latter’s retirement and recent health conditions. He’d assumed that Nekoma could just go to other opponents but rivals like Karasuno were hard to find. Without Ukai, he was afraid Karasuno would fall apart, but the current team before him exceeded his expectations. He tells the members to work hard and meet Nekoma again at nationals.

As the teams begin cleaning up, the players approach one another. In the equipment room, Taketora approaches Tanaka, who assumes he came for a fight. However, a flustered Taketora asks for Kiyoko’s name instead. Tanaka threatens him immediately but Taketora reveals that he’s actually not brave enough to speak to her. Taken back, Tanaka steps aside and tells Taketora her name. The two end up bonding over their shared infatuation for Kiyoko and actually become friends.

Elsewhere, Kageyama watches Kenma intensely while wondering to himself how Kenma practices. Unnerved, Kenma thinks back to what Hinata told him about Karasuno’s setter earlier and quickly runs away.

On the other side, Inuoka and Hinata introduce themselves while complimenting each other while excitedly jumping up and down and using their own language of gibberish. Tsukishima watches them with a scowl, attracting Kuroo’s attention. Kuroo adds that Hinata and Inuoka don’t sound like high schoolers while Tsukishima seems too mature. Tsukishima simply walks away when Kuroo suggests that he should loosen up a bit.

Asahi tries to help Shibayama clean up but intimidates the first year instead. Daichi watches the spectacle as Kai laughs at how Asahi looks like a dad with his son though Daichi instead compares it to looking like a scared child being faced with a kidnapper. Next to them, Nishinoya stares at Yaku intensely and the latter complains lightly to Sugawara. Suddenly, Nishinoya runs up to them and compliments Yaku hurriedly before leaving. Watching him go, Yaku notes that Nishinoya’s scary because, despite his power, he still yearns to improve.

Outside the gym, Takeda thanks Nekomata for the match. Nekomata compliments Takeda before turning on Ukai, reminding him that he lost all the matches today. Naoi calls him out for his remarks and Nekomata defends himself, adding that Ukai looks too much like Ikkei. Angrily, Ukai walks away as Tekeda reminds him that he had only agreed to be the coach until this game but Ukai instead announces that he’ll get revenge on Nekomata at nationals, revealing that he’s going to stay as Karasuno’s coach.

Outside, the players say their goodbyes. While Tanaka and Taketora are crying dramatically, Daichi and Kuroo are shaking hands with fake smiles, both trying to out-strength each other and each promising they will win the next time their teams face each other. Hinata approaches Kenma and reminds him of what he said earlier about how he doesn’t really like volleyball. He asks the second year how it felt today and Kenma replies that it feels the same. Surprised, Hinata announces that next time he’ll defeat Kenma and make him say that he feels frustrated about losing and his outlook on volleyball will change. Kenma smiles and agrees and the teams then part ways.

After Nekoma leaves, Kageyama says to Hinata that if today was an official match, they would’ve ended up losing the entire tournament. Overhearing them, Ukai reminds them of the Interhigh and exclaims that when they get back, they’re going to go over everything and train. With that said, Karasuno begins to head home.

Retrieved from "https://haikyuu.fandom.com/wiki/Rival_(Episode)?oldid=95173"
Community content is available under CC-BY-SA unless otherwise noted.