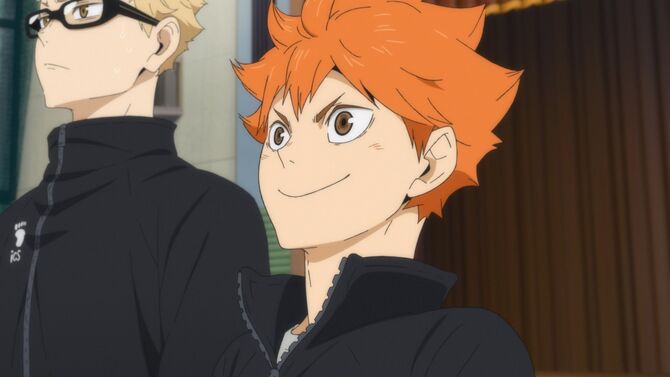 "Self-Introduction" (Japanese: , Jiko Shōkai) is the first episode of Haikyū!! To The Top, based on the manga Haikyū!! by Haruichi Furudate. The episode premiered on January 10, 2020.

As Karasuno prepares for the Spring Tournament, the team receives news that Kageyama and Tsukishima are invited to exclusive training camps. Not wanting to lose to anyone, Hinata sneaks into the camp, but must now introduce himself not as a spiker nor decoy, but as a humble ball boy.

While eating his second breakfast of the day after morning practice, Hinata makes his way to class and is soon accompanied by his friend Acchan. Before entering the building, the two pause and stare a banner hanging on the front of the building congratulating the boys' volleyball team for making it to Nationals. They soon hear Kiyoko calling out to Hinata, reminding him that the team will be having measurements done later for the spring pamphlets and asks him to pass the information to the other first-years.

Kageyama approaches Hinata and challenges him to see who has the highest spike point. Hinata accepts the challenge and even makes things interesting by offering a prize to the winner. Kageyama requests three curry buns be the prize and the two begin their usual bickering while Acchan wonders how the two manage to work together.

At the Sakanoshita Store, Yūsuke Takinoue appears as Keishin Ukai is ending a phone call. Ukai reveals that he has been calling previous alumni and every so often is offered to be set-up for a date since he is still single. After laughing at Ukai's situation, Takinoue tells the coach that he will accept a video project and promises to do his best for the team.

Back at Karasuno High School, Hinata exits the nurse's station after being measured and reveals to Tadashi that he has grown 1.4 cm taller, making him 164.2 cm. Hinata then questions Tadashi about his height and becomes despaired when Tadashi announces he has grown to be 180.0 cm. Kageyama then appears and reveals he is 181.9 cm. Hinata becomes thrilled that he has grown more than Kageyama. Tadashi questions Hinata if he somehow memorized the heights of everyone on the team as Hinata is teased by Ennoshita as this being the time he is good with math.

Hinata's joy is then cut short when Tsukishima appears and announces he has reached 190.1 cm. Hinata and Kageyama are furious as Yamaguchi happily congratulates his friend for finally surpassing the 190 mark. Tanaka quickly tackles Tsukishima while ordering him to shrink and the group is scolded by Daichi for being so loud.

Later in the gym, the team begin to measure their vertical running jumps. Tsukishima quickly gains the highest point at 334 cm, to the annoyance of Hinata and Kageyama. As Nishinoya goes to measure, the team is watched by two members of the boys' basketball team who comment how everyone on the volleyball team is able to jump higher than them and one remarks that Nishinoya is only four and a half feet tall and is promptly corrected by the angry second year.

Kageyama measures next and reaches 337 cm, putting him at the highest point thus far and leaving Hinata the last to be measured. As Hinata prepares to jump, he is heavily watched by several members of the team and Yachi notices their competitiveness with him. Hinata goes to jump, impressing many with his jumping height and is announced to have reached 333 cm; losing the bet with Kageyama and being tied with Asahi for the reaching point.

Asahi becomes on edge at having the same reach point as Hinata, vowing that he will not lose to the younger player and remarks how Hinata has gained about 5-6 centimeters in his jump than previously noted. Nishinoya believes it is in part due to Kageyama's sets. He explains that because Hinata is always certain that he will be given a set, he aims to jump higher by prioritizing to jump as straight up as he can and therefore Kageyama will set for a high point; thus allowing Hinata to gain height in his jumps.

As Hinata begins to challenge Kageyama to see who has the highest blocking point, Takeda appears in the gym and gathers the team around for an announcement. He announces that Kageyama has received an invitation to attend the All-Japan Youth Training Camp. The team quickly become stunned at the announcement before congratulating Kageyama. Still surprised, Ennoshita reveals that it will be after the next two years that nominees in the current time frame that will be selected for Japan's under 19 representatives.

Takeda explains that the camp will take place in December and will last for a period of five days, though attendance is not required as it will also be right before the spring tournament. Kageyama and Daichi both agree that Kageyama should attend the camp. Hinata then questions if he was invited as well and is mocked by Tsukishima saying that only the best are invited. Takeda says that only Kageyama was invited to the Youth Camp. Sugawara advises Kageyama that if he is ever interviewed that he mentions he learned from his wonderful senpai while Tanaka calls this out as unfair. Asahi questions why Nishinoya hadn't been invited to the Youth Camp, as well as the libero, tries to comfort Hinata. Daichi comments that it is rumored that players are selected for the Youth Camp based on how skilled and well-rounded they play and that perhaps maturity plays a part in selection as well.

Takeda then announces that Tsukishima has been invited to attend a camp for first-years at Shiratorizawa Academy by Coach Anabara from Johzenji High School. Tsukishima tries to decline the offer to attend until Daichi volunteers the middle blocker to attend anyway.

As Takeda leaves to inform the camps that Kageyama and Tsukishima will be in attendance, Kageyama mocks Hinata by saying that he is moving on ahead of him and causing Hinata to become incredibly angry.

That evening at Sakanoshita Store, Hinata is looking over toothbrush travel kits when he hears Tadashi mentions how he'd like to attend one of the camps and Tsukishima jokingly suggests he sneak in. Tadashi promptly abandons the idea out of fear of being punished for such a task.

Time quickly passes until it is the day before Kageyama goes off to the Youth Camp. On his way home that night, Hinata has a vision of Kageyama moving on ahead of him. The next day, Kageyama arrives at Tokyo station and begins following directions given to him by Takeda on how to reach the training center.

At Karasuno, Sugawara wonders if Kageyama made it to the training camp location without any trouble. Tanaka assures Sugawara that Kageyama will be fine due to the instructions Takeda gave him before he left. At that moment, Tadashi realizes that Hinata is not present.

At Shiratorizawa Academy, Coach Anabara is observing the line-up of the invited first years when he and everyone else notice that Hinata is standing among them. Tsukishima instantly tries to act like he does not know Hinata or what he is doing there until Koganegawa recognizes Hinata as a player on the Karasuno team. At that point, Tsukishima angrily questions Hinata what he was thinking in attending the camp uninvited and learns that Hinata had heard his conversation with Tadashi about crashing the camp. Tsukishima begins to scold Hinata for going through with crashing the camp, surprising Kindaichi and Kunimi that he has lost his usually cool composure.

Back at Karasuno, Ennoshita informs the team that Hinata had infiltrated the first year training camp. Though most of the team is shocked, Tanaka and Nishinoya are proud of Hinata's actions until they notice Daichi is furious.

Hinata informs Ukai of his actions over the phone and is promptly yelled at by his coach. Takeda then takes the phone with a serious expression and also scolds Hinata for being reckless. Hinata quickly apologizes before admitting that he wants to be part of the camp because all of the best first years are present and he wishes to see what he can learn from them. Takeda says he understands how Hinata feels but goes on to say that it does not give Hinata the right to do as he pleases as it causes problems for those around him and tells Hinata to return to Karasuno at once.

At that, Washijo suddenly appears and takes the phone from Hinata and says he does not mind having another ball boy present; surprising Hinata and Takeda.

Kageyama has finally made his way to the Ajinomoto National Training Center where the Youth Camp will be held and arrives at the same time as Kiyoomi Sakusa, a second-year wing spiker from Itachiyama Institute and one of Japan's top three aces. Sakusa recognizes Kageyama being from the team that defeated Shiratorizawa in the finals in order to advance to Nationals. Kageyama becomes excited at the chance of getting to practice with Sakusa and quickly introduces himself, his position, and the school he attends though Sakusa does not seem very interested.

Several of the invited players of the First Year training camp are excitedly gossiping how Hinata was bold enough to crash the camp and how some had mistaken him for a middle school student. Kindaichi, Goshiki and Koganegawa are upset the coaches are not allowing Hinata to participate as they each want to face off against Hinata. Kindaichi and Goshiki desire payback and Koganegawa wishes to see what kind of level Hinata is on that causes Aone to give him such respect.

Anabara reveals to Takeda that he had indeed recommended Hinata for the training camp but the middle blocker was denied for unknown reasons but is willing to allow Hinata to stay if everyone involved is ok with it. The phone call ends and Takeda and Ukai are concerned about Hinata as the best first years have been selected for the training camp and Washijo is the one in charge. Knowing Washijo's reputation and preferences on players, Ukai wonders if Hinata thought his actions through.

At the Youth Camp, Kageyama makes his way to the main gym and is taken back by the features of the gym; such as a monitor that has a six-second delay time to allow players to examine their plays and the floor not being made of hardwood material.

Kageyama and the rest of the players are gathered together and are introduced to the coach for Japan's men's Olympic volleyball team, Fuki Hibarida. Hibarida expresses that the phrase 'The Japan team crumbles before height and strength' is a useless phrase and no longer has any meaning. He also voices how talent is something to be shown and not had. He wishes for the players to show the world that volleyball is more interesting than believed.

At the First Year camp, the players have gathered together and Hinata takes the opportunity to apologize for interrupting and announcing himself as the new ball boy.

Retrieved from "https://haikyuu.fandom.com/wiki/Self-Introduction_(Episode)?oldid=95373"
Community content is available under CC-BY-SA unless otherwise noted.