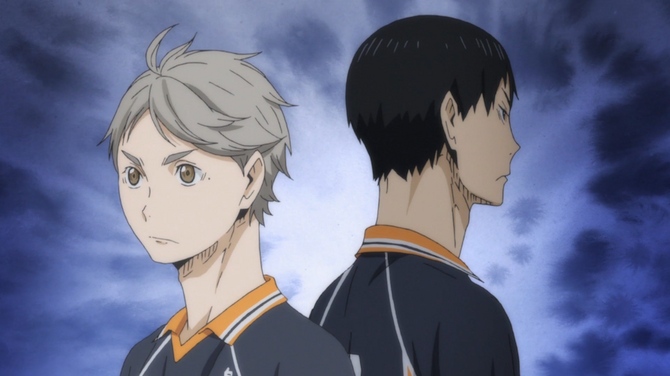 Senpai's True Abilities (Japanese: の, Senpai no Jitsuryoku) is the twenty first episode of the Haikyū!! series, written and illustrated by Haruichi Furudate and published in the manga magazine, Weekly Shōnen Jump. The episode premiered on August 24, 2014.

Sugawara subs in for Kageyama, and Aobajohsai wins the first set. Kageyama is shocked as he watches Sugawara reveal his real setting abilities. Karasuno takes the lead in the second set thanks to Sugawara's tactics, but Oikawa's serves are still a major problem. After observing Sugawara's interactions with his teammates, Kageyama finally learns what it means to be a setter–and a team member.

Kageyama is switched out with Sugawara. Initially, Kageyama gets scared, remembering the incident from junior high when he was benched. Sugawara quickly reassures him that they’re just going to change the rhythm for now. Resigned, Kageyama walks to the bench, where Hinata approaches him. The middle blocker yells that he said he would be the one to defeat Kageyama so until then, he can’t lose to anyone else. Kageyama sheepishly agrees and states that he hasn’t lost yet.

As he goes to the side, Ukai calls to him and reminds him to take note of the game from his current standing and use this time to calm down. Kageyama takes his advice and watches Sugawara go out onto the court. The third year easily boosts his teammates’ morale with a quick greeting and some encouragement, impressing Hinata, who compares him to Kageyama.

Sugawara whispers a strategy to Tsukishima and Oikawa watches seriously, unsure of Sugawara’s abilities. The match resumes and Iwaizumi goes to spike right in front of Sugawara. At the last second, Sugawara and Tsukishima switch places, enabling Tsukishima to block Iwaizumi.

Hinata soon gets switched back in and Sugawara whispers to him another strategy. Issei goes to spike and after delaying his jump for a second, Hinata goes up and effectively blocks the former. Sugawara compliments the first year right afterwards and Kageyama watches this interaction from the side.

The next move, Hinata goes to spike and Issei and Iwaizumi wait for him to say “bring it”, only to realize that Hinata only uses those signals with Kageyama. Hinata gets the ball and scores. With this, Karasuno’s able to steadily catch up. Sugawara thinks happily to himself that he’s not as strong or skilled when compared to Kageyama, but he has experience and knowledge on how to accommodate the different attackers on the team.

Soon, Karasuno’s able to lower the point gap to only six points, but it’s still not enough and it becomes Oikawa’s turn to serve. Oikawa aims cleverly in between the players and scores easily with this. Daichi receives the ball after the third time, surprising Oikawa. Hinata and Tanaka then go forward, but Aobajohsai sees through the ruse and knows it’s a back attack with Asahi attacking. Asahi’s attack is received and the ball goes to Hinata, who barely manages to hit it over the net.

As Aobajohsai returns the attack, Hinata remembers some things Sugawara noticed about Aobajohsai and uses them to figure out the timing for his block, enabling him to stop Kindaichi. The ball flies to the back of the court, but goes out. Aobajohsai wins this set.

In the break, Ukai reminds the players that the most troublesome part of Aobajohsai is Oikawa’s serves, so they’ll have to maximize defense. Ukai thinks to himself that he’d only added Sugawara into the game to help the players calm down and wasn’t expecting Aobajohsai to get so thrown off with this different presence on the court. This could be another weapon Karasuno would use in the future. At Aobajohsai’s side, Iwaizumi notes that they’ve been too used to Hinata only doing the freak quick strikes with Kageyama. Irihata overhears and thinks to himself that they’ve also focused too much on Kageyama and neglected the fact that Karasuno also has another reliable setter.

Kageyama approaches Sugawara and compares his observations of Aobajohsai with the third year. Sugawara suddenly brings up how they’re competing over the same spot on the team, but he won’t lose. However, at the same time, he’s also reassured when he faces strong opponents because he knows Kageyama is here as well and can provide support to the team.

The second set soon begins. As Kageyama observes Sugawara’s relationship with the others, Ennoshita explains that Sugawara’s good at accommodating others. The second year then asks Kageyama if he adjusts his toss when Hinata has a hard time hitting it. Kageyama affirms it and Ennoshita adds that he should try the same with all the different attackers on the team.

Oikawa goes to serve, and everyone notices right away that only Nishinoya and Daichi are in the back to receive it. As expected, Daichi’s able to receive Oikawa’s serve and Karasuno prepares for a counterattack. Sugawara gives the ball to Tanaka, who blasts through the blockers. Karasuno pulls ahead as Kageyama watches this interaction, realizing what he has to do as a setter now.

He thinks back to his time in junior high, thinking that he’d assumed he got benched because he was no longer useful to the team. However, now, he’s simply waiting to recover and regain his moment. He watches his teammates and expresses his desire to go back into the court and play with his team at the same time as Sugawara is thinking that he wants to stay on the court longer. They’re both going to do the best of their abilities and win the match for their team.

Finally, Ukai makes the decision to switch Kageyama back into the game. Sugawara thinks to himself that he only has one more play left. Before he can get back into position, Asahi calls to him and tells him decisively that he wants the next toss. Sugawara is surprised, but gives the ace what he wants. Asahi spikes straight past Kindaichi and scores.

After that move, Kageyama steps up and Sugawara gets off the court. As they switch places, Sugawara tells Kageyama that it’s frustrating, but Hinata doesn’t make the same expression as he does with Kageyama when he hits the third year’s tosses. He reminds Kageyama that the team’s strong and they’ll win this match.

As Sugawara heads to Ukai, the coach tells him to improve on an area for next time. Sugawara catches the underlying meaning of him being subbed in again in future matches and thanks Ukai happily. He runs to where the other members are and notes that they need to draw out everyone’s maximum power to beat Aobajohsai. However, the most important thing they need is to enable Karasuno’s ultimate decoy to be working at a hundred percent. The only person who can make that happen is Kageyama.

Retrieved from "https://haikyuu.fandom.com/wiki/Senpai%27s_True_Abilities_(Episode)?oldid=86219"
Community content is available under CC-BY-SA unless otherwise noted.