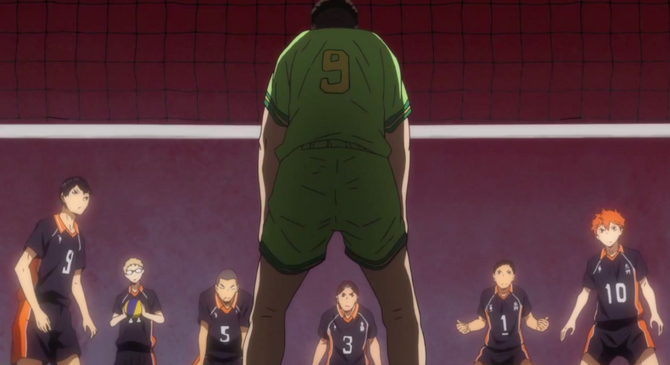 Karasuno's second opponent is Kakugawa, a volleyball team that has a player who is 201cm tall. Former Coach Ukai comes to watch the match, and Karasuno tries their best to work around the height advantage their opponent has. After their win, Karasuno bumps into Johzenji, who is fated to be their next opponent.

As Yamaguchi is walking across the court, he barely manages to miss getting hit by a powerful spike done by Yūdai Hyakuzawa; a player standing at 6'7". The players of Kakugawa High circle around their coach for a pre-game briefing. The second years on the team offer compliments and advice to Hyakuzawa, such as offering to remind him of any rules he may have forgotten and to be cautious of the serves done by Kageyama and Asahi.

The game soon starts with Tsukishima serving. The ball is received and set to Hyakuzawa who approaches to spike. Kageyama, Hinata and Tanaka attempt to block the shot but, due to his height, Hyakuzawa is able to hit the spike clear above the block and score.

In the next rally, Tanaka sends the last hit to Hinata. Seeing that he would be blocked if he tried to spike, Hinata attempts to use the feint shot but is easily blocked by Hyakuzawa who sends the ball back to the Karasuno side and scores yet again.

Hyakuzawa is complimented by his team for the easy score and their setter, Yuzuru Komaki, tells him that he should always keep an eye on the ball no matter how many tricks Hinata tries to pull. In the stands, Ikkei is listening as the company he is with sympathize with Karasuno for going against a player as tall as Hyakuzawa until he states that, even though Karasuno is at a disadvantage when it comes to height and power, there are still other ways that they can fight back.

As the game continues, the ball is sent directly over the net. Hinata attempts to push is over but fails when Hyakuzawa beats him. Kakugawa serves but the ball goes out of bounce, giving Karasuno their first point.

Overhearing several fans speaking of how Kakugawa is becoming more known only for having Hyakuzawa, Kaito Asamushi becomes annoyed at this but told not to mind it by the rest of the team. Kageyama serves next and the Kakugawa team manages to receive it, allowing Hyakuzawa to land a clean cross-shot.

Daichi is stunned as he admits that there is no way the team will be able to stop a ball that high until he looks over to Nishinoya and the two nod to each other. Ukai, having noticed this exchange, calls for a time-out.

During the time-out, Hyakuzawa admits to his team that he feels bad for Hinata who is jumping and running about in an attempt to score but continues to be stopped. One of his teammates asks if he's joking but Hyakuzawa says he is not. Asamushi believes he understands, saying that Hinata must feel he doesn't stand a chance against Hyakuzawa who has only been playing volleyball for the last six months. At that, Hyakuzawa says that while he knows technique and passing can be difficult, he believes volleyball is fairly simple.

Hinata expresses his frustration at not being able to score. Daichi advises him not to get too upset before he and Nishinoya inform the team of something they've noticed. They explain how they observed Hyakuzawa during the warm-up and previous game and noticed that he has only been spiking cross shots. Ukai then adds that, from his own observations, he believes that Hyakuzawa is fairly new to volleyball; in the same manner as Lev from Nekoma but Hyakuzawa does not possess the same speed and dexterity as Lev. With this new information, the team realizes they can ignore any possibility of a line shot from Hyakuzawa.

When the game commences, Nishinoya is able to perfectly receive Hyakuzawa's spike. Hinata does a diagonal jump and performs the feint shot, getting by Hyakuzawa and scoring at last. Before Tanaka serves, Kageyama notices how good he is feeling and asks Daichi if he can perform the new quick attack; much to Hinata's excitement.

Tanaka serves and Kakugawa receives and sets the ball to Hyakuzawa only for Nishinoya to once again receive. Remembering what Komaki said about just following the ball, Hyakuzawa positions himself near Kageyama in order to be ready to stop the ball only for he and his team to be taken by surprise when Hinata already spikes the ball before they fully realize it.

As the game continues, Hyakuzawa becomes more confused and frustrated at how Hinata is able to somehow continue to jump higher than him and spike the ball.

Hinata prepares to serve and notices that Hyakuzawa is seemingly being protected by the rest of his team to receive. Kakugawa receives Hinata's serve and Hyakuzawa spikes it back; hitting Hinata in the process, much to Takeda's horror. One of the Kakugawa players attempts to directly send the ball back only to be blocked by Tsukishima.

Before the next set begins, the Kakugawa team goes over how they should focus on all of Karasuno's attacks instead of just focusing solely on Hinata. The set begins and Kakugawa is able to dig up the ball and set to Hyakuzawa who is able to spike the ball hard enough that Nishinoya is knocked over.

Daichi tries to encourage the team by reminding them of all their new attacks. One of Ikkei's students asks if using the minus tempo attack is the only way to beat someone as tall as Hyakuzawa. Ikkei chuckles and answers that the minus tempo is not the only way to beat someone of incredible height. If it wasn't possible with only one or two players, increasing numbers is another way. At this, Karasuno performs the synchronized attack and Tanaka lands a spike. This frustrates the Kakugawa team but Hyakuzawa declares that he will take a point back.

The game continues with each side pushing forward and not backing down. Ukai notes that, instead of getting worn out, Hyakuzawa seems to be getting more amped up. Eventually, Karasuno manages to get to match point.

Before the next rally begins, Daichi overhears some fans remark how short the Karasuno front line is in the current rotation (Daichi, Hinata and Tanaka); causing Tanaka and Hinata to angrily yell at the person who stated this. Daichi then advises them that, since they cannot block the ball, they should try to slow it down.

Kakugawa's setter sends the ball to Hyakuzawa. Daichi, Hinata and Tanaka use the soft block (or plate block) and manage to get a one-touch. The ball is saved by Asahi and Tanaka sends the last hit to Hinata. As he cannot perform the minus tempo attack, Hyakuzawa believes that he has Hinata cornered. But he and everyone else are quickly proven wrong when Hinata executes the block out against Hyakuzawa's hand and the ball is sent out of bounce; winning the game for Karasuno.

Hinata muses that he was able to land a point without needing the quick attack and is praised by the team for scoring the final point and allowing the team to make it past the first round. As the team lines up, Hyakuzawa recants his earlier statement of volleyball being a simple game.

After the game, the Karasuno players are preparing to leave and Kiyoko does a quick search for any possible forgotten items. Kageyama remarks how, even though Hinata has gotten good at attacks, he still needs to work on his receives and questions if he needed to shout 'hiyah' when he did the block out. Despite pointing out that he scored the point, Hinata is teased by Nishinoya and Tanaka before Ennoshita stops them by asking if they were keeping up with their summer break homework; which they were not.

Hinata then goes on to express how they will soon be able to face Oikawa and Ushijima if they continue to win. He then looks through his bag and realizes he left his lunch box behind and hurries off to find it. He soon sees that Kiyoko had found it but is being cornered by players from the Johzenji team.

Without Nishinoya and Tanaka to help, Hinata quickly hurries forward and comes between the players and Kiyoko. He tries to get them away from the Johzenji players but is pushed aside by the team captain, Yūji Terushima, who continues to request Kiyoko's phone number.

He is only stopped when Hinata jumps between him and Kiyoko, impressing the captain and letting him see the school name on Hinata's shirt. Remembering that Karasuno is one of the teams that has made it past the first round, Terushima remarks how he had been hoping to play against Hyakuzawa but is now unable to because of Karasuno. Hinata questions if Johzenji made it past the first round only to learn that they did not have to play a first-round, having been one of the teams to place in the top four.

Terushima begins to leave, saying that if Karasuno happens to go against his team that it would be an interesting game. Now that the Johzenji players are gone, Kiyoko thanks Hinata for saving her and hands him his lunch; which has an 'interesting' wrapping (faces of cats) that Hinata tries to pass off as belonging to his little sister.

Hinata and Kiyoko finally appear and apologize for taking so long. Daichi asks if they found everything and Kiyoko points out Hinata's lunch box wrapping, embarrassing him in front of everyone.

Retrieved from "https://haikyuu.fandom.com/wiki/Simple,_Pure_Strength_(Episode)?oldid=92236"
Community content is available under CC-BY-SA unless otherwise noted.