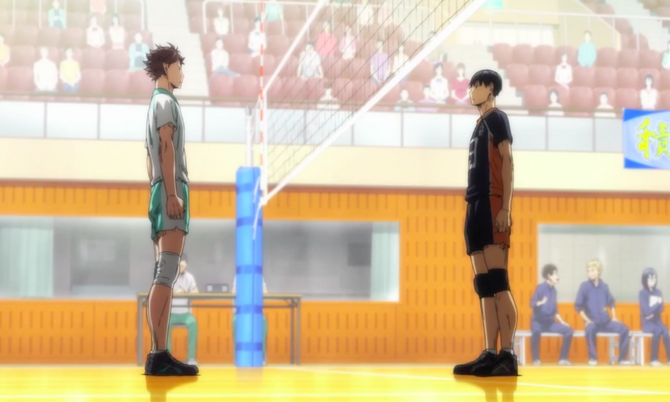 "Switch for the Utmost Limit" (Japanese: スイッチ , Kyokugen Suitchi) is the twenty-fourth episode of Haikyū!! Second Season, based on the manga Haikyū!! by Haruichi Furudate. The episode premiered on March 19th, 2016.

It's the last set and Karasuno is in the lead. Aobajohsai and Karasuno try their hardest to win, with the thought that the strongest six would be the ones who claim victory. But triumph is with Karasuno, as they win the match with Kageyama and Hinata's quick spike. Oikawa reflects that it is impossible for someone with no natural talent to beat any volleyball genius, no matter how much they train, strategize or who their teammates are, but he would continue on the path straight ahead of him with everything he's got.

With the score tied, Hinata spikes the ball down and scores. Everyone is stunned at his method of using a snap from his wrist to spike the ball down. Tanaka questions Kageyama if he aimed it this way since Hinata had been too close to the net but Kageyama simply answers that he adjusted the toss.

Oikawa marvels at how Kageyama seems to just plunge into things without hesitation, whether it works or not, and now there is Hinata who seems to go even farther than Kageyama. Though Iwaizumi warns they should be cautious of Hinata and Kageyama, Oikawa feels that the team of six will be stronger than just two.

Tsukishima serves and the ball is received by Watari. As Oikawa prepares to set, he figures that the last set and spike from Kageyama and Hinata was out of the blue and refuses to give them the chance to properly figure it out and use it again. He sets to Iwaizumi who lands a spike past Kageyama.

The teams continue to score one after another. As Matsukawa rotates in, Yahaba is subbed in for Kindaichi. He serves next and Asahi is able to receive it, though it goes short. Kageyama is able to set to Tanaka who spikes past Kyōtani and Matsukawa but Oikawa is able to save the ball. Yahaba sets to Kyōtani but the ball is short. Kyōtani surprises everyone when he is able to spike the ball with his left hand without any problems and brings Aobajohsai to one point away from reaching twenty.

Yahaba serves again and Nishinoya receives. Despite being marked by Matsukawa, Hinata runs to one end and uses the feint shot. Yahaba rushes forward to save the ball but misses, frustrating him and the rest of Seijoh as they did not expect Hinata to use a feint. As Yahaba is being subbed out, he informs Kyōtani that he's counting on him.

The next rally stretches on with both sides continuing to save and return the ball as their teammates continue to cheer them on until Matsukawa is eventually able to spike past Hinata and Kageyama fails to receive. With Seijoh now at twenty points, Daichi tries to keep the team calm and say they just need to get a point back.

Kyōtani serves next and Daichi receives. Kageyama sets to Tanaka and the spike lands before Watari can get to it. As Hinata goes to serve, he is subbed out for Tadashi. The Seijoh team watch Tadashi with caution and Hinata and the rest of the Karasuno team encourage Tadashi to give the serve everything he has.

With further encouragement from Tsukishima, Yachi and Shimada, Tadashi serves and the ball goes straight for Kyōtani who guesses the serve will go out but then recalls what happened during the second set when the ball changed. He attempts an overhand receive when the ball suddenly changes trajectory at his fingertips and continues heading out of bounds. Just as it seems the ball will land and score for Karasuno, Iwaizumi dives and sends the ball back. Watari sends the ball over and Tanaka sends the receive to Kageyama as they then launch a synchronized attack.

Asahi spikes but Iwaizumi able to receive. Oikawa sets to Hanamaki who successfully lands a feint before Kageyama is able to save it. The Seijoh team celebrate that they have cut Tadashi's serve off. Iwaizumi especially is proud that they have stopped Tadashi as he recalls when he first began playing volleyball that he only found spiking enjoyable but has since found the pleasure of taking what his opponents believed to be a perfect shot and turning it back on them.

Though upset at having been stopped so quickly, Tadashi is still praised by Ukai for his serve. The rally continues with both teams again saving and returning the ball until Kindaichi is able to land a spike. Oikawa is next to serve and Asahi, Daichi and Nishinoya prepare themselves to try to receive. Oikawa performs his power serve and lands a service ace when the ball lands right behind Daichi and Asahi before they can even move to save it.

With Seijoh now at match point, a time-out is called and Ukai reminds the team of what they must do. As the time-out ends, the third-years of each time encourage one another as Oikawa returns to serve. As Oikawa serves, Daichi recalls serves from Ikkei Ukai, Asahi, Bokuto and Masaki Gōra and is able to receive the ball and send it up; surprising everyone and annoying Oikawa.

Tanaka and Tsukishima rush forward but the set is sent to Asahi and he successfully spikes past a double block and scores. As Nishinoya rotates out with Hinata, Sugawara is subbed in for Tsukishima. After he is told of a plan by Sugawara, Kageyama notices how Hinata has become extremely focused and questions how he is able to do this at the end of every game.

Though being encouraged by the waiting players, Sugawara is nervous about serving as any mistake now would mean the end for Karasuno. He serves and the ball heads toward the back to Iwaizumi and Watari. Watari momentarily wonders if the ball will go out or not or if either he or Iwaizumi should save it. Iwaizumi ultimately saves the ball with an overhand receives and Shimada notices that this has kept Seijoh's ace in check.

With the score tied at deuce, Sugawara serves again and aims for Iwaizumi once more. This does not go unnoticed by Hanamaki and Oikawa. Oikawa sets to Hanamaki but the ball hits the top of the net and Sugawara is able to save it. With Sugawara having gotten the first touch, Oikawa is confident that now he and Kageyama will not switch like they had previously done. The remaining players launch another synchronized attack. Hinata calls for the ball but everyone is stunned when Kageyama instead does a setter dump.

Oikawa rushes forward, determined not to let the ball land but he is unable to make it in time. He glares at Kageyama with great intensity as he recalls all the times he felt inferior to Kageyama and Ushijima. With Karasuno now at match point, he promises himself that he will not lose.

A time-out is called and as the Seijoh players express their frustration at Kageyama's confidence, Oikawa recalls when he had spoken to a former coach several years back. The coach had questioned if Oikawa truly knew if he was at his full potential in mind, body and technique. He had informed Oikawa that if he truly believed someone was born with a natural godlike gift over another, then it would be impossible to beat them regardless of effort, creativeness or the team one is on and continuing to think like this will only lead him down a path of failure and ineptitude. Oikawa was advised not to compare himself to others and that he only has himself to improve upon.

Iwaizumi guesses that if Sugawara serves the ball to the front as he previously did, he will cover it and advises Watari to guard the back. Asahi and Daichi continue to praise Sugawara while Tanaka encourages Kageyama and Hinata. The time-out ends and the players return to the court.

Sugawara serves the ball to the front and Iwaizumi receives. Oikawa sets to Kyōtani who attempts a spike but Tanaka is able to save and just barely stop from getting hit in the face. With the ball up, Sugawara and Kageyama switch positions. Sugawara sets to Asahi. His spike makes it past a double block but is saved by Hanamaki. The ball heads out but Oikawa gives chase and signals to Iwaizumi the ball will be for him. From outside the court, Oikawa sends the ball toward Iwaizumi, stunning everyone with his feat.

After crashing into side chairs, Oikawa hurries back onto the court as Iwaizumi spikes. Daichi is able to receive but the ball heads backwards until Tanaka is able to dive for it and send it back. Asahi runs toward the back and surprises everyone when he does a turning mid-air spike, in the same manner, Yūji Terushima had done during the game against Johzenji. He sends the ball back to Seijoh and Watari is able to receive but the ball goes directly into the net.

Kyōtani is able to save and send the ball up but it goes over the net. Daichi calls for Kageyama to do a direct spike but is blocked by Kindaichi. The ball hits Sugawara on the head but stays in play. After getting a running distance, Hinata charges forward while calling for the ball. Oikawa silently calls for Kageyama to go at him with his strongest weapon.

Kyōtani, Iwaizumi and Kindaichi all jump to block Hinata as Kageyama sends him the ball. Seeing everything slowed down, Hinata sees his best chance of success is deflecting the ball off Kindaichi's hand. He spikes the ball against Kindaichi's hand and Oikawa is unable to receive it. The ball goes out and the game ends with Karasuno winning.

As the team celebrates their victory, Kageyama and Oikawa stare at one another.

Retrieved from "https://haikyuu.fandom.com/wiki/Switch_for_the_Utmost_Limit_(Episode)?oldid=95668"
Community content is available under CC-BY-SA unless otherwise noted.