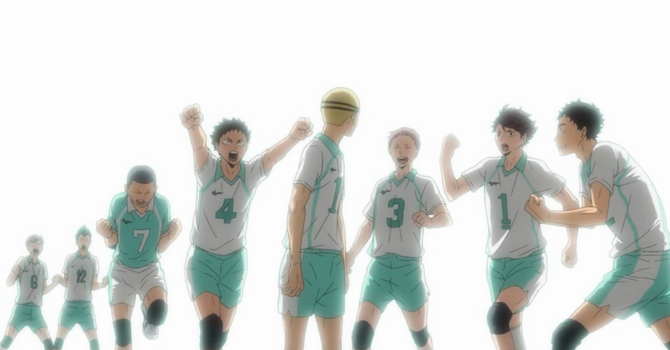 "Team" (Japanese: チーム, Chīmu) is the twenty-third episode of Haikyū!! Second Season, based on the manga Haikyū!! by Haruichi Furudate. The episode premiered on March 12th, 2016.

The two teams are battling to win the third match, and Kyōtani's efforts are starting to become more reckless. He gets switched off, and has to calm down in order to play again. With the help of Yahaba, he does get back on to continue scoring points against Karasuno, and is finally able to play with Aobajohsai as a teammate. With Karasuno in the lead, would they be able to win the match to proceed?

The coaches of Karasuno and Aobajohsai motivate their respective teams and give them advice on what to do in order to win the third match. Irihata tells his team to continue serving strongly and not to be dejected if they cannot stop Hinata from scoring; they just have to limit his path and pick up the ball. Seijōh responds positively but Kyōtani remains silent, which causes Yahaba to glare at him. Karasuno vow to surpass Aobajohsai.

The two teams continue to battle to pull ahead, but Kyōtani's spikes and serves are becoming more reckless. Both Irihata and Ukai acknowledge that the more they struggle for dominance, the more fatal the consequences will be when one of them loses their balance, so they must hang on and not let go.

The final set is very close, but at this stage, no one has taken a significant lead yet. Shimada comments that they've got to fight really hard not to get left behind right now. With Asahi's serves, Karasuno is able to match Seijoh but the opponents are easily able to pull ahead. Kyōtani tries to spike it past, but Tsukishima is able to effectively block the ball. Ennoshita notices that Tanaka was subconsciously picking a fight with Kyōtani, and that Tsukishima had also noticed and used that opportunity in Karasuno's favor. Kyōtani continues to clash with Tanaka, to the point where his serve bounces off the court and the game pauses from a timeout.

Flashbacks of Kyōtani's past shows that he continues to practice volleyball even though he had abandoned the club training. In the gym where he frequents to hone his skills, other players are commenting on how they were surprised he was playing a team sport, and that he could be going through his rebellious stage. A man reveals that Kyōtani is playing because there's something he likes about volleyball. This thing could be his childhood experience of watching the Japan volleyball team play against their opponents.

Back to the present, Kyōtani's spike hits the net and Watari approaches the boy to switch out. The wing spiker shrugs the libero's hand off his shoulder, and Oikawa motions for Iwaizumi to talk some sense into Kyōtani. However, Kyōtani is promptly switched out with Kunimi and shows his displeasure of the turn of events by ripping the sign off the first-year's hand. The coach tells him to calm down if he wants to get back out on the court, and the player storms back to the box.

Yahaba bravely orders Kyōtani to calm down, and the other players watch on in shock and fear. Matsukawa tells Yahaba not to push him, but he continues to point out the wing spiker's immature and lame behavior. He comments on how he had the nerve to come back and get right into the match, and some of the other players have a problem with that. He continues to order Kyōtani to do his job properly and that if he tracks dirt onto the senpai's stage, then he'll never forgive him. Kyōtani voices out that he had always thought of Yahaba as shallow, and Yahaba agrees but says that because he respects his senpais he is acting like so and that as long as you're on the court, any point won or lost belongs to the team. Irihata watches the interaction, and soon Kyōtani is switched back onto the game.

Now back in, Kyōtani reflects on his behavior in the past in terms of scoring recklessly in volleyball. His former team members were too afraid to switch him out, saying that he was the one with the most power. He hesitates for the ball and is surprised when Oikawa tosses the ball for him to hit. Ukai interprets this gesture as absolute trust. Another flashback reveals Kiyoshi-san's talk with Kyōtani when he was taking a break. He adds how running away from the team and practicing elsewhere without rest was taking the easy way out. The teenager is surprised, and Kiyoshi-san explains that a team is both reliable and annoying, so in order to perform his best he would need to face the time, and have the team face him head-on.

With that in mind, Kyōtani successfully hits the ball, and at that point in time, the team has suddenly become stronger. Oikawa hands the ball to Kyōtani when it is his turn to serve, and the latter accepts the ball with the rest of his teammates and coaches watching. Sugawara comments on the side on how he would've behaved if Kyōtani was on Karasuno, and Kageyama thinks that Oikawa is truly amazing and terrifying. Ukai summarizes that Kyōtani truly fits in with the rest of the team, and that would make it harder for Karasuno to beat them.

On the stands, Shimada comments that if the course of Hinata's spike is narrowed or the opponents can read it, then it'll get picked up. It's Oikawa's turn to serve again and this brings unease to Karasuno and their supporters. Daichi manages to receive the serve, but it flies over to Seijōh's side. Kindaichi reflects back to the practices he had with Oikawa. They perform the sharp wipe successfully in the match, and Kageyama notes that Kindaichi's movements are different from the Interhigh. To counteract this, Kageyama and Hinata execute their quick, but it is too close to the net; however, Hinata is able to hit the ball directly down to gain a point for the team. It is now an all-out war between the teams as they struggle to pull ahead to win the final match, with Karasuno leading the scoreboards.

Retrieved from "https://haikyuu.fandom.com/wiki/Team_(Episode)?oldid=95667"
Community content is available under CC-BY-SA unless otherwise noted.