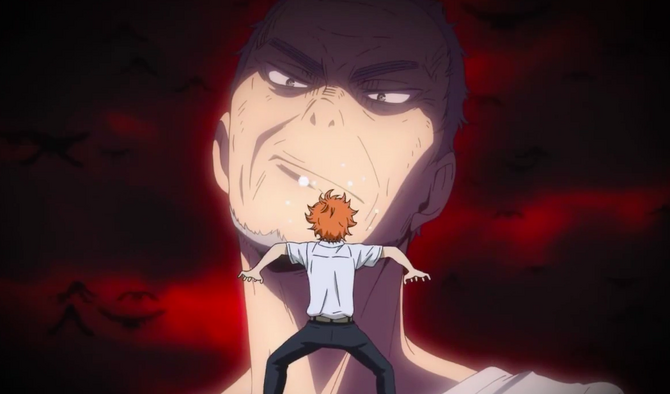 "Tempo" (Japanese: テンポ, Tenpo) is the sixth episode of Haikyū!! Second Season, based on the manga Haikyū!! by Haruichi Furudate. The episode premiered on November 8, 2015.

Kageyama seeks out Oikawa for help regarding Hinata's wish to hit the quick on his own will. Coach Ukai takes Hinata to see the former coach of Karasuno's volleyball club to get some advice on how to improve his skills and learn to fight on his own. The two first-years learn that Hinata has the absolute leadership in the attack, so Kageyama has to learn to give Hinata the tosses he wants, and Hinata has to learn more about the techniques to different quicks in order to improve.

Ukai and Hinata are seen driving down a road while Kageyama is seen heading to the Lil' Tykes Volleyball class where he runs into Oikawa and his nephew, Takeru. Arriving at the location, Ukai reveals that he has brought Hinata to meet his grandfather, the original Coach Ukai, who is currently holding his own volleyball class for grade-schoolers.

Ikkei taunts Ukai about not being able to figure out the next step to improving the quick attack and throws him to the ground, frightening Hinata.

Hinata requests to learn how to fight on his own and Ikkei questions if he will be able to do it due to his height. Hinata surprises him by answering his height is the reason he wants to improve and causes Ikkei to remember the Small Giant. He then explains that, no matter how talented the setter, it is the spiker who is in control of the quick attack.

At the Lil' Tykes Volleyball class, Kageyama tries to ask Oikawa for help but is mocked instead. Kageyama bows to show how serious he is but Oikawa refuses to listen and begins to walk away until Kageyama blocks his path while still bowing. Oikawa finally decides (albeit mockingly) to help Kageyama then explains that Hinata wants to change the quick attack by doing it with his eyes open. Oikawa tells Kageyama to allow it but Kageyama argues that it is not as easy as it seems.

This causes Oikawa to see that Kageyama refused Hinata his request by reverting to his kingly ways and wanting to play it safe by sticking to what they already know how to do. He then states that the quick attack is not something Kageyama controls; it is actually Hinata. He then departs while telling Kageyama that unless he changes his mind about this then he has not changed from his time as the King of the Court.

Back with Ikkei, Hinata is told that he is the one in control of the quick attack and then is instructed to do a few blocks. Hinata agrees and surprises everyone when he is able to jump above the net (which had been lowered to accommodate the younger players).

He notices how Ikkei is instructing the players to try different tempo's and is able to block two of the three. Ikkei asks if he noticed anything different. Hinata realizes the timing in each set was different and Ikkei explains the different tempos and how they work. While he admits that he is not sure what kind of quick attack Hinata and Kageyama have been doing, he does say that 'there is no greater toss than one that is easy for the spiker to control'. In utter surprise at what this means, Ukai realizes that Hinata is not the only one who should be practicing and rushes off to find Kageyama. Hinata then asks Ikkei to teach him so he will be able to continue to fight even when at the top of the summit. Ikkei later has Hinata begin to work with other setters in order to master first tempo so he can become more familiar with the process.

On his way back to Karasuno High, Kageyama is thinking over what Oikawa told him when Ukai calls him. A moment later, Ukai finds Kageyama and begins to explain the kind of toss that would be needed in order to give Hinata more attack options. He explains to Kageyama what tempo is and how he should start setting new tosses where the ball will 'hang' in the air. Kageyama agrees to try this new method.

Later at practice, Hinata and Kageyama are put on different teams so they can continue to work on their new techniques. Daichi is shown to speak with Yui Michimiya and asks to use the girl's gym once their own practice is done so the boys' team can work on new attacks they hope to use in future matches.

Asahi hopes to improve his jump serve and Nishinoya reveals he wants to attempt jump sets. The whole team agrees to learn how to do a synchronized attack. Kageyama begins trying the new set and Hinata is shown to continue receiving instructions from Ikkei.

The episode ends with Takeda reminding the team that they will soon be going to the week-long summer training camp and the next tournament will be held shortly after.

Retrieved from "https://haikyuu.fandom.com/wiki/Tempo_(Episode)?oldid=95434"
Community content is available under CC-BY-SA unless otherwise noted.