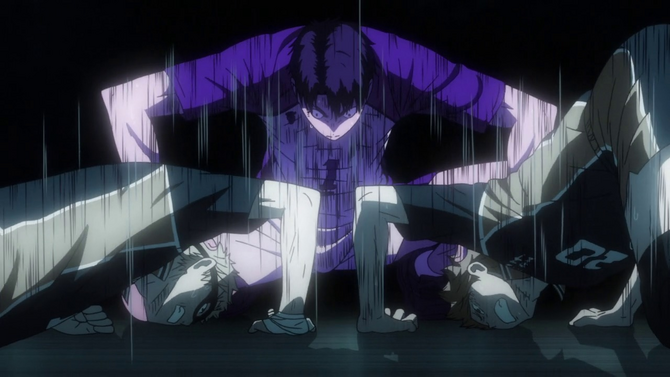 "The Battle of Concepts" (Japanese: コンセプトのい, Konseputo no Tatakai) is the tenth episode of Haikyū!! Karasuno High School vs. Shiratorizawa Academy High School, based on the manga Haikyū!! by Haruichi Furudate. The episode premiered on December 9th, 2016.

Karasuno, who were once named as the "Fallen Rivals" and "Flightless Crows", defeats Shiratorizawa with a score of 21-19. Tears of joy and mixed emotions burst through, as Karasuno resolves to win the upcoming Spring Interhigh Tournament.

As Kawanishi goes to block, Hinata spikes and the ball hits the blocker's arm and looks to be landing on Shiratorizawa's side until Ushijima is able to save it. He calls for Shirabu to give him the last hit. Tsukishima and Asahi go to block and Ushijima spikes, hitting Hinata with such force that he's knocked over. Tanaka sends the last hit to Kageyama before making sure Hinata is alright.

Yamagata sends the ball to Shirabu but the setter frowns at seeing it returned to a difficult location. Despite this, he feels Ushijima's powerful aura call for the ball and he sets to him. Tsukishima enlists Asahi and Daichi to assist in the block, surprising Washijō when he sees they are blocking for a straight for the first time. A small flashback reveals that Tsukishima had planned for this exact moment. Up until now, they have always closed in on Ushijima's cross shots in order to force him into a straight that would lead directly to Nishinoya. Having blocked in this manner so much, they believe Ushijima would not be prepared when they would attempt to block his straight shot as it would then not give him anywhere to hit.

Despite his fatigue, Ushijima surprises them all when he suddenly switches to a cross-shot that Kageyama is able to receive. Tsukishima and Hinata are the two most surprised by this and they instantly begin to feel the pressure of facing Ushijima. That pressure slowly begins to ease when the rest of the team comes to their aid. Daichi is able to dive and save the receive followed by Asahi attempting to spike the last hit but getting blocked. With the ball heading toward the back, Tanaka saves it and sends it to Kageyama.

Anticipating that Hinata will be getting the last hit, Kawanishi and Tendō both notice that Hinata isn't running up for a minus tempo attack. Ikkei watches in amusement, seeing that Hinata is purposely slowing down his tempo in order to blend in with the others for a first tempo synchronized attack. The Shiratorizawa players become panicked at seeing the attack and, as Kageyama sets, Kawanishi and Goshiki go to block the one they believe will be getting the attack.

In mid-air, Hinata sees everything slowed down and is able to see a clear spot to spike to. With all eyes on him, Hinata spikes past the blockers. Yamagata dives to save but the ball heads out. As he watches, Ikkei silently goes over how volleyball is a sport of height and it is no secret that taller players have a greater advantage. Despite this, it is good for players to strengthen individual strengths and find new ways to fight.

After Reon fails to make it in time to save the ball, everyone in the gymnasium is silent as they realize what this means. Everyone remains silent as the referee signals Karasuno gaining the point and winning the set, thus meaning Karasuno has won the match. The Karasuno side then erupts in cheers while the Shiratorizawa supporters are stunned at their loss.

In a daze, Daichi embraces Asahi and they are embraced by Sugawara. Through tears, they let out a cry of victory. Tsukishima, Kageyama and Hinata watch them in silence until they are quickly embraced or knocked down by their teammates who are also crying tears of joy. The Shiratorizawa players watch as the Karasuno team celebrate their victory and Tendō bids farewell to his paradise. When it's time for the line-up, Hinata is unable to move but promptly receives help from Kageyama and Nishinoya. As the teams thank each other, Oikawa is annoyed that Ushijima does not look upset at having lost. While being thanked by the Karasuno team, Washijō watches Hinata in particular. He questions if Hinata is about the same height as him, but also sees that the middle blocker may still have more growing to do. He also sees that the higher Hinata's goals become, the more challenging the path will be.

As Iwaizumi and Oikawa watch Karasuno, both of them discuss Kageyama's plan during the last set and his reason for having switched with Hinata after his serve. They both realize that when Tsukishima had returned to the game, he right away laid out a plan involving the last block and what they were attempting to do. Because Nishinoya was out, Kageyama had switched with Hinata as he believed Ushijima may switch to a cross and he was their best receiver in the back row. Iwaizumi praises Kageyama as Oikawa's student though Oikawa denies such a thing. Oikawa then goes on to say that despite Hinata having slowed his tempo and blended into the synchronized attack at the last minute, Kageyama was still able to match with him. Iwaizumi states that all of this was made possible because of Tsukishima's blocks. Regardless, Oikawa believes Hinata is the type of spiker that makes a setter want to toss to him. The two then leave at Oikawa's bidding, saying he does not want to be present to watch the awards ceremony.

The Karasuno team line-up and thank their supporters who continue to shower the team with praise as many, including the vice-principal, cry joyfully. Michimiya shouts out congratulations to the third-years and happily cries when Daichi holds up the certain victory charm she gave him before the game.

After thanking their supporters, the Shiratorizawa players make their way back to their coaches. Reon notices Shirabu's demeanor and questions if he is alright. Shirabu answers he is alright but is just a little surprised that they lost, having absolutely believed they would not lose. Reon sympathizes with the setter though he says that he is sure either side did not think they would lose. The team falls silent as they begin shedding tears of regret until they reach their coach. Washijō informs them they will have a meeting when they return to the school and enforces a one hundred serve punishment.

When the Karasuno players return to their side, they are immediately praised by Takeda and Ukai; such as Daichi having received so many serves and spikes, Tsukishima successfully getting many one touches and even Tanaka keeping his mentality strong. Tadashi sees that Tsukishima is upset about something even though he was just hailed as the hero of the game for all of his blocks and one touches.

On one side of the court, Ushijima and Tendō are doing their cool down stretches when Tendō points out that Ushijima had seemed angry about something at the end of the set; saying that in that type of situation Ushijima would usually either regroup or let someone else handle it. Ushijima confesses that he wanted to send a message to Hinata, saying 'I'm stronger than you'. Tendō is surprised that Ushijima admitted this and the ace questions if wanting to do such a thing was childish. Tendō points out that a lot of things people do are sometimes for childish reasons. After complimenting Ushijima on his last spike, Tendō reveals that he will not be playing volleyball after high school but hopes to see Ushijima continue to play to one day be on tv and be able to brag they are best friends.

As Hinata and Kageyama observe the scoreboard, Ushijima approaches them and promises that the next time they face each other he will defeat them. He then leaves after the two accept, claiming they will be even stronger when they next face him.

Tadashi later finds Tsukishima in the bathroom and sees his friend is upset about something. Tsukishima is frustrated at how he had claimed he would be able to stop a handful of Ushijima's spikes but, out of five sets, he was only able to stop one. He goes on to call himself lame until Tadashi angrily scolds him, telling him he isn't lame and shouldn't be depressed as they are heading to nationals. Tadashi then tells Tsukishima to get to the awards ceremony and leaves him behind. Tsukishima puts on his regular glasses and smirks, seeming to be over his state.

At the awards ceremony, the team is presented with a certificate, trophy and medals as they all look forward to the Spring Tournament. Later on, the team is eating at the same restaurant after they had lost to Seijoh. Hinata and Tanaka have passed out on the table and Nishinoya and Kageyama are shown fighting to stay awake. Ukai scolds them to either sleep or eat as Takeda continues to cry in happiness of their victory.

Sometime later, Hinata is sitting in his class as his classmates talk about how the boys' volleyball team won the finals and are going to nationals. One of the female students asks Hinata where the tournament is going to be held and he excitedly answers that it will be at the Tokyo Metropolitan Gymnasium. Then to Hinata's dismay, his classmates believe that he will only be there as an errand boy; doing things like carrying the luggage and doing laundry. Hinata corrects them by saying that he is a member of the team and will be playing in the match but they do not believe him. A brief scene shows Yachi working on a new poster.

Later that day in the club room, Hinata receives a message from Kenma congratulating the team for their win. Hinata realizes that the Tokyo representatives will soon be decided and Ennoshita explains that four teams will be decided in the first qualifier and later the final representatives will be decided in November. Tanaka adds that Nekoma and Fukurōdani both made it as Narita adds they each made it to the top four schools in Tokyo.

Hinata becomes more excited and declares that they will defeat Nekoma but Kageyama states that they would have to qualify first. Hinata confidently states that Nekoma will make it and they will play a match like never before at the spring tournament.

During the credits, various scenes are shown including Nekoma and Fukurōdani meeting outside the Sumida City Gymnasium, Saeko and Shimada promoting the team's trip to Tokyo and receiving donations, and Takinoue observing Yachi's new poster in Ukai's store.

In the end scenes, Takeda receives a call and he is shown with a surprised expression. The boys' volleyball team is then shown in the gym as they each measure their highest spiking point. Kageyama soon reaches the highest point at 337 cm with Hinata the last one to measure. When he jumps, two members of the basketball team are shocked at how high he jumped and Hinata and Kageyama quickly ask the height. Yachi announces it to be 333 cm and Sugawara points out that Hinata and Asahi are tied, much to Asahi's dismay. Just as Hinata is proposing a challenge of the highest blocking point to Kageyama, Takeda enters the gym and gathers the team around.

The episode ends with Takeda announcing that Kageyama has been invited to the All Japan Youth Training Camp, with the rest of the team staring at him in shock.

Retrieved from "https://haikyuu.fandom.com/wiki/The_Battle_of_Concepts_(Episode)?oldid=93831"
Community content is available under CC-BY-SA unless otherwise noted.