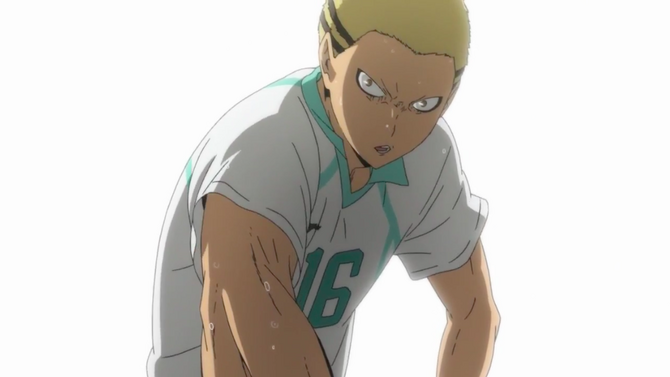 "The Breaker" (Japanese: し, Kowashiya) is the twenty-first episode of Haikyū!! Second Season, based on the manga Haikyū!! by Haruichi Furudate. The episode premiered on February 27th, 2016.

Karasuno recognizes that Kyōtani is a double-edged sword in the match: he makes just as many mistakes as he does attacks, and if Aobajohsai does not use him successfully, his presence in the game can backfire their intentions to increase their offensive power. Sugawara is subbed into the game to help Karasuno gain more points, but is soon switched back out when the formation changes. Coach Ukai considers bringing Yamaguchi in as a pinch server to win the second set from Aobajohsai.

Kyōtani's spike lands out of bounds and therefore wins the set for Karasuno; stunning everyone. Oikawa is utterly speechless at Kyōtani's actions and has no idea how to address this with him. Iwaizumi takes the initiative and punches Kyōtani on his head while yelling at how reckless he was. Kyōtani apologizes while admitting he simply wanted to get involved early as it has been a while since he last played in a game.

When the teams switch sides, Hinata notices that Kyōtani is in the starting lineup. Kageyama guesses that if they are keeping the new addition that he must be as quick as Kunimi and warns Hinata to be on his guard.

Oikawa warns Kyōtani that, while he is free to play as he pleases, he will not hesitate to have him removed from the game if he continues to make mistakes. Kyōtani does not seem to take this warning seriously until Iwaizumi states the exact same thing and he answers in understanding; much to Oikawa's frustration. Shigeru Yahaba reveals this is due to Kyōtani having challenged Iwaizumi to multiple athletic competitions and lost every single time. He will only answer to Iwaizumi and Kunimi refers to it as Iwaizumi being the alpha-dog.

Daichi motivates the team that if they stay positive, they will surely win the second set.

Asahi serves next but the ball goes out. Oikawa serves but this also goes out. Daichi, noticing a scuff mark on the floor left from the serve, believes Oikawa's aim is improving. Tsukishima delivers a serve that hits the net and Iwaizumi recovers. Kageyama attempts to figure out who the attack will be coming from and sees Oikawa set it to Kyōtani while calling him by his nickname Mad Dog. While Kageyama is surprised where the attack is coming from, Hinata is in awe at Kyōtani's nickname.

From the stands, Shimada notices that Kyōtani is approaching the net from outside the boundary lines and the reason is revealed when Kyōtani spikes a sharp cross-shot; dodging Kageyama, Hinata and Tanaka with no problem at all.

Iwaizumi serves and the ball is sent back to Seijoh when Daichi receives it. Kindaichi and Kyōtani both begin running for a quick attack but Kindaichi pulls back at the last moment. Hinata notices this and quickly goes to block Kyōtani but misses. Oikawa assures Kindaichi not to be too afraid of Kyōtani and tells him that Hinata noticed he had hesitated during the run-up.

Iwaizumi serves again and Daichi receives once more. This time he is able to send the ball to Kageyama. Hinata spikes but Iwaizumi is able to dig the ball up. Hinata notices Kindaichi running from behind Oikawa but then Kyōtani jumps right in front of him and lands the spike while running into Hanamaki.

Despite having scored the last three points, Daichi sees that ever since Kyōtani was subbed in the plays Seijoh has been making are more sporadic and their normal rhythm seems different. Iwaizumi serves again but the ball hits the net.

Kageyama serves and Hanamaki receives. Kyōtani charges in for an attack and Hinata jumps to block only for Oikawa to send the ball to Kindaichi instead. After Kindaichi scores, Oikawa notices Kyōtani is annoyed at having been a decoy and decides to use this to their advantage. With Seijoh's new player and methods, Daichi warns the team to be on alert at all times.

Kindaichi serves. Nishinoya receives and Hinata attempts to spike only for Iwaizumi to get the ball up again. Kageyama sees this is part of Seijoh's plan to always have at least one middle blocker marking Hinata. Hanamaki sends the ball to Kyōtani but it ends up being close to the net. Seeing Kyōtani go up against a triple block again, Oikawa orders Kyōtani to bring the ball back for another set up only for him to spike at full power and be blocked; getting a point for Karasuno.

Furious, Coach Mizoguchi questions why Kyōtani didn't try a feint or fake-out only for Kyōtani to answer that a spike does not feel as good unless going in with full power to land the kill. Hearing this unnerves the Karasuno players who were listening and Hinata eventually states that Kyōtani is missing out by not liking feints or fake-outs.

Nishinoya receives Hanamaki's spike and Kyōtani gets a one-touch on Asahi's spike. Oikawa sets Hanamaki's receive to Kyōtani who is noticeably trying the sharp cross spike again. Hinata is determined to stop him this time and as he, Daichi and Asahi jump to block Kyōtani spikes the ball directly into the net.

Oikawa overhears Hinata being impressed with Kyōtani's spike and he himself is impressed by the power it holds due to Kyōtani's method of arching his body to snap out the force for his spikes. Even if it can get by blockers, it's a ball that cannot be easily picked up. Irihata and Sadayuki Mizoguchi compliment Oikawa's tactics on using Kyōtani's skills.

Kyōtani serves next but the ball is sent out. On the next rally, Oikawa gives a signal to his team and Iwaizumi goes up to serve. Nishinoya receives and Kageyama sets to Asahi. Iwaizumi receives and Oikawa sends the last shot to Hanamaki. Hinata manages a one-touch when he jumps to block. Watari receives and the ball is sent toward Karasuno's right side. Hinata follows as Oikawa goes to set and notices too late that the ball is sent to Kyōtani on the opposite side of the court. Kyōtani lands the spike and Sugawara and Ennoshita each are shown having different reactions to the angle the set was done in.

The game continues for several plays with the teams scoring one after another on each other until Hinata is finally up to serve. Though still upset at not having been able to spike yet, he notices Kageyama give him a signal. He serves and Hanamaki is given the set from Oikawa. He spikes past Daichi but Tanaka receives. As Kageyama prepares to set, the team unleashes the synchronized attack. Hinata is sent the ball for a back attack but is stopped by Oikawa's block and Oikawa taunts Kageyama that he had seen the attack coming. At that moment, Yachi and Shimada spot Sugawara being called over by Ukai and Shimada questions if he will be replacing someone.

Saeko questions what he means and he and Takinoue explain that players can substitute for others in cases of injuries or as pinch servers. But they recall the last time that Sugawara had been put into the game was for a last resort situation. Shimada believes that this time Sugawara may be getting put in to help snag the win.

Oikawa is next to serve and delivers a fast and powerful ball that lands before Daichi can get it. With the serve now landing, Daichi begins to see how the rivalry between Karasuno and Aobajohsai is shaping as both teams refuse to back down. Oikawa serves again but the ball grazes the top of the net. Nishinoya saves and Tsukishima sends the ball to Tanaka who then deflects the ball off Kyōtani's hand and it goes out of bounds.

Sugawara is now substituted in for Tsukishima and quickly whispers a plan to Kageyama. Although nervous now that he must serve after getting sent in, Sugawara launches his plan as he directly aims his serve at Kyōtani. Kyōtani receives the ball and Takinoue and Shimada right away see that this will cause Kyōtani to be late to start an attack. Oikawa sets to Kindaichi and Sugawara receives the hit.

Hinata runs across the court and deflects the ball off Kindaichi's hand and scores for Karasuno. At his next serve, Sugawara again aims for Kyōtani who again receives and cannot ready himself for a set. Oikawa also notices that Kyōtani is deliberately being aimed at. Daichi saves the return and now Sugawara and Kageyama switch positions. With Kageyama now on the offense, he lands a line shot and scores.

When a time-out is called, Shimada now sees what Ukai was planning when sending Sugawara in. As players rotate locations during the course of the game, the front and back rows have different jobs to do. Shimada figures that the rotation in which Karasuno is most vulnerable for offense and defense is when Tsukishima is in the back row to serve as there would only be two spikers in the front row and Tsukishima cannot block from the back.

When the game continues, Sugawara again aims his serve at Kyōtani but he is shocked when he sees him move out of the way and the ball is instead received by Hanamaki. Kyōtani then lands a powerful spike and scores. Tsukishima is then sent to substitute Sugawara.

After Tanaka lands a line shot past Kyōtani, Kageyama is next to serve. Iwaizumi receives the serve and Kyōtani tries to spike. Asahi is able to save the ball and Kageyama sets to Daichi who attempts a feint shot. Oikawa digs the ball up and Watari does a jump set to Kyōtani who deflects the ball off Hinata's hand and out of bounds.

At Seijoh's next serve, Hinata tells himself not to follow Kyōtani and to just follow where the ball goes. After receiving a set from Kageyama, Hinata spikes past Matsukawa but the ball is picked up by Hanamaki. Kyōtani gets the final hit and Kageyama fails to receive it properly.

Another time out is called when Seijoh reaches twenty points. Saeko feels certain that even if Karasuno were to lose this set they could still get the third and win since they won the first set. Shimada dismisses that thought by saying it would be better if Karasuno takes the second set as well or else the third one could be the most difficult of all to face.

Kindaichi serves next but the ball hits the net. Tanaka now serves and the ball is picked up by Iwaizumi. As Kyōtani is running up to spike, Hinata notices Matsukawa running around from behind. He goes after Matsukawa only to see Oikawa set to Kyōtani after all and ends up missing the spike. Kyōtani does the next serve and lands a service ace with great force.

Frustrated with Kyōtani, Ukai now sees that he is a double-edged sword that was a great risk for Seijoh to play but it ended up working in their favor. He has Takeda use their last time-out as he comes to see Oikawa's true plan of using the second set to get Kyōtani fired up to his full potential. When the time-out is over, Kyōtani returns to serve again and Ukai informs Yamaguchi to be patient.

The episode ends with Yamaguchi silently pleading to be put into the game.

Retrieved from "https://haikyuu.fandom.com/wiki/The_Breaker_(Episode)?oldid=92537"
Community content is available under CC-BY-SA unless otherwise noted.