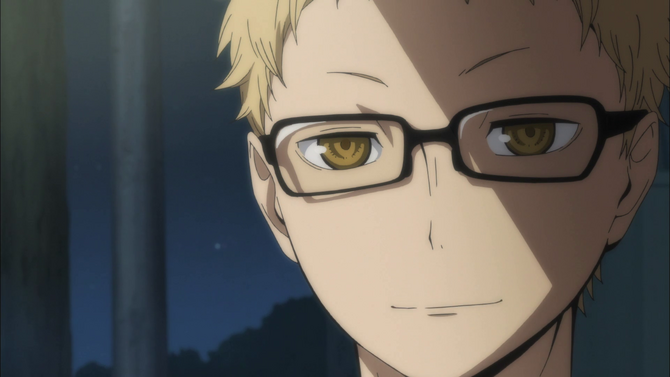 "The Formidable Ally" (Japanese: の, Saikyō no Mikata) is the third episode of the Haikyū!! series, written and illustrated by Haruichi Furudate and published in the manga magazine, Weekly Shōnen Jump. The episode premiered on April 20, 2014.

Sugawara starts helping Hinata and Kageyama practice in the morning. After hearing Hinata's jaded opinions of Kageyama, Sugawara encourages him to work with the first-year setter because he could become Hinata's most formidable ally. As the days pass, Hinata slowly improves, but his relationship with Kageyama isn't going anywhere until they encounter Tsukishima and Yamaguchi, the other first years applying for the club. Tsukishima's insults about Hinata's height and Kageyama's past motivate the two to team up to win on Saturday.

Kageyama and Hinata are practicing in the gym, but Hinata can’t receive Kageyama’s spikes. As they’re arguing about it, Sugawara enters the gym, revealing that he already knew Tanaka was secretly helping the duo due to the second year’s weird behavior the night before. However, he decides to keep the training from Daichi and even helps Hinata with his receives. Hinata isn’t satisfied with Sugawara though and persistently asks Kageyama to toss to him. Kageyama coldly replies that he will only toss to whoever he thinks is essential to winning, but he doesn’t think Hinata’s that person.

Later on during the day, Hinata and Sugawara are practicing outside when Sugawara reveals that he’s the official setter of Karasuno. He tells Hinata he could set to him from now on and Hinata gets excited because he'd been yearning for an official setter for a long time. However, he can’t accept Sugawara’s offer because it would feel like he lost to Kageyama. Sugawara asks Hinata why he’s so competitive with Kageyama and Hinata tells the third year about the tournament last year, when Kageyama’s team destroyed his. Just as Hinata's explaining his past to Sugawara, Kageyama comes by to buy a drink from the vending machine and eavesdrops on the two. He overhears Hinata saying that he wants to become strong enough to defeat Kageyama because if he can do that, it would put him on even grounds with other strong opponents; he doesn’t want to lose anymore. Sugawara notes that, to Hinata, Kageyama’s the strongest opponent in his grade level, but now he can become Hinata’s most formidable ally.

After school ends, Hinata goes to the gym where he bumps into Kageyama. The setter takes him to another place to practice since they can’t enter the gym. Just as the duo leave, Tsukishima and Yamaguchi enter the gym and greet the third years. The other upperclassmen are shocked at the first years' height.

At the corner of the track field, Hinata and Kageyama practice into the evening until Kageyama hits a ball into a tree. He forces Hinata to get it and as the latter’s getting the ball, he calls Kageyama “King”, angering the setter. Hinata’s confused because it’s a cool nickname.

Back in the gym, as the members are cleaning up, Tanaka remarks to Sugawara that he doesn’t like Tsukishima and Yamaguchi. Sugawara replies that the first years seem really strong and worries that Hinata and Kageyama may have some trouble. He also mentions that Kageyama seems to have mellowed out since junior high. Tanaka disagrees though, insisting that Kageyama hasn’t changed one bit.

Outside, Hinata and Kageyama’s practice gets interrupted by Tsukishima and Yamaguchi. Tsukishima catches Kageyama’s toss to Hinata and teases Hinata about his height. Hinata exclaims that he and Kageyama will win on Saturday and Tsukishima replies calmly that since it’s an important match for the duo, he could just go easy on them. Angrily, Kageyama replies that he would win even if Tsukishima tried his best and Tsukishima reminds him of his “King” nickname. Bringing up Kageyama’s behavior during junior high, Tsukishima reveals that Kageyama’s teammates did something to him during his last game. Unnerved, Kageyama grabs Tsukishima’s collar but ultimately decides not to do anything. He then starts walking away and Tsukishima teases him even more. Having enough, Hinata jumps over Tsukishima's head, grabbing the ball out of his hand. As he lands, he announces that he’ll spike the ball over Tsukishima’s head during the match. Smiling secretively, Tsukishima tells him to not take everything so seriously and to just have fun. Confused, Hinata demands an explanation, but Tsukishima and Yamaguchi ignore him. Once they leave, Hinata demands Kageyama to continue practicing and the setter agrees.

A few days later, as they’re practicing in the gym, Kageyama’s surprised by Hinata’s improved receives. Despite reaching his limits, Hinata demands more from Kageyama. Annoyed, Kageyama spikes the ball with full power, sending it to the back of the gym. Refusing to give up, Hinata chases after it, impressing Kageyama who finally decides to trust Hinata. Kageyama thinks over Hinata’s determination to win and tosses to the latter who, with the last of his strength, gets back up and spikes. Sugawara notes to Tanaka that that toss was special to Hinata, who had never had a proper setter before. Just as Hinata’s recovering, Kageyama comes over and announces that they’re going to win on Saturday.

Retrieved from "https://haikyuu.fandom.com/wiki/The_Formidable_Ally_(Episode)?oldid=95122"
Community content is available under CC-BY-SA unless otherwise noted.