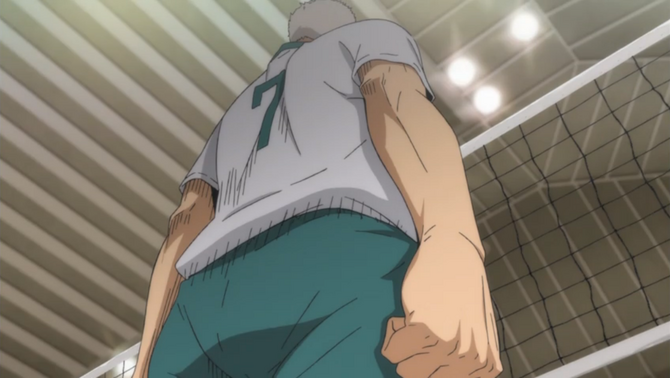 The Iron Wall (Japanese: , Teppeki) is the seventeenth episode of the Haikyū!! series, written and illustrated by Haruichi Furudate and published in the manga magazine, Weekly Shōnen Jump. The episode premiered on July 27, 2014.

Date Tech and Karasuno battle it out in the second round, with neither side leading for long. While Date Tech easily blocks Karasuno's attackers, Karasuno defense holds strong thanks to Daichi and Nishinoya. Kageyama begins to enact the plan Ukai came up with: force Hinata to stand out to take the attention off the other attackers. The two first years use their usual quick strike and throw Date Tech off. When Aone starts keeping up with it, Kageyama switches his focus to Asahi, giving the ace a toss that enables him to push past Date Tech's defense and finally, get revenge for their previous match. Karasuno has used up its secret weapons now. From this point on, they can only fight to win the match.

Three months ago, Karasuno was destroyed by Date Tech in a match. Asahi remembers how he used to see the other side of the court clearly until the Iron Wall blocked his view. As he faces it, he wonders what the other side looks like.

In the present, Nishinoya announces he’s going to be there to watch everyone’s backs, boosting everyone’s morale. The players line up to bow and the match begins. On Date Tech’s side, Oiwake tells the players that Karasuno’s quicks are amazing only due to Hinata's height throwing his opponents off and they have nothing to worry about. He tells them to shut Hinata and Asahi down before they can score any points and to remind Karasuno that they are the iron wall. On Karasuno’s side, Ukai warns the team of Date Tech being known for strong serves as well as their defense and that their tactic from the start is to try to break down their opponents' morale.

As the match begins, Karasuno lines up in its best-receiving formation with Nishinoya, Asahi and Daichi in the back row. Right away, Kageyama sends the ball to Hinata, but Aone reacts quicker than they’d expected and almost blocks Hinata but the middle blocker uses a weak spike to hit the ball against Aone's arm and score. They realize that Aone and the rest of the Date Tech players use read blocking, a technique Karasuno hasn’t encountered before and is therefore not easy to trick with decoys as the players will wait until they see where the set will go before making the jump to block. However, Karasuno still has another weapon up its sleeve: Hinata and Kageyama’s quick strike.

Kageyama serves but ends up sending it to the libero. It gets sent back to Karasuno’s side when Aone spikes but Nishinoya saves it and sends it to Asahi, who tries out a back attack. Aone and Futakuchi block him but Asahi isn’t discouraged. Aone continues blocking Karasuno’s next few moves but Karasuno’s defense holds strong and it stays two points ahead.

At this point, Kageyama signals to Hinata that they’re going to do their usual quick strike. Hinata excitedly prepares himself while Oiwake watches in confusion. He assumes that the quick strike Hinata and Kageyama used before was their usual one and is confused as to why the two aren’t distressed that their new weapon was blocked.

In a flashback, Ukai goes over the practice match with Nekoma and asks the players why they think the quick strike got stopped. Though Hinata states that he believes it was because Inuoka was too good, Kageyama reasons that Inuoka simply figured out Hinata’s movements and therefore was able to block the attack. Ukai agrees and adds that it was also because Nekoma has a smart analyzer on the team: Kenma. The quicks are strong but not invincible and they need to be cautious once other teams start figuring out a way to adapt to the combo. What Kageyama has to think about is how to best use the attack.

In the present, Kageyama finally sends the usual quick strike to Hinata knowing that Date Tech will not be able to keep up even with their read blocking because of Hinata's sheer speed. No one in Date Tech is able to react when Hinata spikes and Karasuno scores. Oiwake and the other Date Tech coach are surprised and wonder if the toss was by design or only succeeded because of luck.

Tsukishima goes in and requests for tosses further from the net from Kageyama and the two right away begin to bicker until Tanaka stops them when he sees Daichi getting angry at the first years fighting. Hinata is soon switched out when he misses a serve. The two teams play steadily with neither side giving in but Date Tech soon notices that Kageyama doesn't use that quick strike with other players and assume that it was either a fluke or something only Hinata can hit. Hinata’s then switched back in and by now everyone’s attention is on him and Kageyama. Oiwake and the other coach remember Kageyama from Kitagawa Daiichi and how none of his former teammates could hit his tosses. However, they're confused as to how Hinata’s able to keep up effortlessly.

Karasuno continues shocking with the quick strikes, with one toss from the back of the court. Oiwake realizes that it’s not a fluke and finally calls a timeout. They discuss the quick and agree unanimously to stop Hinata. The spectators all focus on Hinata, thinking that if Date Tech can stop him it’ll win the match since the other Karasuno players can’t get past the blockers. However, this is all part of Karasuno’s plan; the more Hinata shines, the less the blockers focus on the other attackers.

Date Tech begins to get discouraged after Hinata scores again by tricking Aone and Futakuchi into jumping early when he delays his jump but Moniwa boosts the members’ morale with a small speech of how they have blocked numerous players before, including Asahi, and this game is no different. Hinata again tries to trick Aone and Futakuchi in the next rally by seeming to jump in front of them only to suddenly head to the left side. Despite having already jumped, Aone quickly follows and finally blocks Hinata’s quick. Aone is quickly praised by the Date Tech support and Takeda and Ukai see that Aone's height and broad stature doubled with his clear and level thinking make him a great threat to Karasuno's attacks.

Karasuno refuses to give in and prepares its next move. Hinata, Daichi, and Tanaka rush forward while Kageyama starts to toss. Date Tech’s confused by the three attackers moving all at once and don’t know who to block. Hinata calls out for the ball and, from previous plays, Aone assumes it’s Hinata and runs in front of him to block. Hinata swings and drops as Asahi appears behind him to Aone's surprise. The ace jumps down the path Kageyama created for him and spikes, pushing past Date Tech’s defense and finally seeing the other side of the court.

As Asahi celebrates with the other members, Hinata looks down at his hand and remarks that it wasn’t him who scored or even spiked. However, he still feels incredible. Kageyama replies that being the best decoy ever is the same as being the ace. Finally understanding that, Hinata smiles and accepts himself as the “strongest decoy”.

Retrieved from "https://haikyuu.fandom.com/wiki/The_Iron_Wall_(Episode)?oldid=95183"
Community content is available under CC-BY-SA unless otherwise noted.