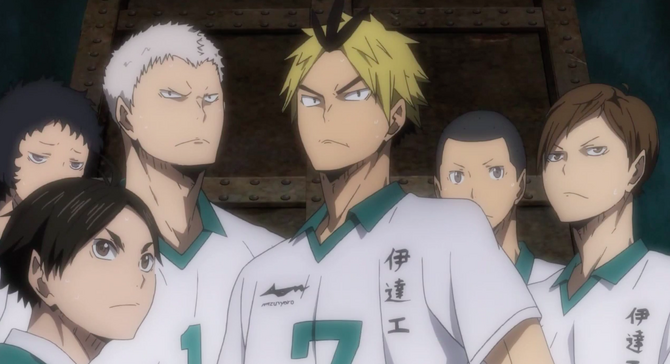 Date Tech is up against Aobajohsai. Karasuno watches on from the stands, and sees the new setter, Koganegawa, on the courts amongst the remainders of the team they had played against last time. His height makes the match intense, but from his lack of experience as the trademark iron wall, Aobajohsai is able to gain victory with their ace's strong spike earning them the winning point.

Third years Kaname Moniwa, Yasushi Kamasaki and Takehito Sasaya hurry into the gym to watch the Aobajohsai vs Date Tech game. Upon arrival, they notice that the game is in the second set and their team is two points behind. Sasaya hopes that Date Tech had taken the first set only to hear from Daichi that Aobajohsai won the first set. Moniwa, Kanasaki and Sasaya are surprised to see Daichi, Sugawara and Asahi still on the Karasuno team. The three soon head over to seats by the cheering squad and observe how the team is doing. They look out onto the court in time to watch Tōru Oikawa set to Takahiro Hanamaki who successfully lands a feint shot over Takanobu Aone and Tarō Onagawa.

Hanamaki next serves and the ball is received. Date Tech's new setter, first year Kanji Koganegawa, positions himself to set as Kenji Futakuchi calls for the ball. Koganegawa sets the ball incredibly high; impressing Hinata and Kageyama but terrifying Futakuchi who is not good at sets that are too high. He jumps to spike but ends up hitting the ball into the net, giving Aobajohsai the point. Although Futakuchi apologizes for the miss, he tells Koganegawa to not send the ball too high or too low, somehwere in the middle and somewhat confusing the setter even though he says he understands.

Hanamaki serves again but the ball hits the net. Daichi and Asahi figure out that Date Tech's new setter is a first year and marvel at how tall he is. Moniwa takes the chance to introduce Koganegawa to the three as Date Tech's new weapon, the Big Boned Setter. Immediately after, they all watch as Koganegawa sets the ball to Aone but it went too high and is caught by their coach on the bench; much to everyone's bewilderment. Koganegawa apologizes and offers a self punishment of one hundred laps but Futakuchi instead tells him to just work on his sets.

Moniwa quickly tries to convince Daichi, Asahi and Sugawara that Koganegawa is still new and developing but will surely be a big name in the future. Daichi tries to assure him that mistakes like that happen to everyone and Kamasaki questions why Moniwa feels the need to justify this to Karasuno.

On the court, Futakuchi reflects how he too was once a clown and surely caused problems for his upperclassmen. Sasaya and Kamasaki are amused at how Futakuchi is failing to handle his underclassmen. At Seijoh's next serve, Date Tech receives and Koganegawa attempts a setter dump but is too obvious in what he is trying and Hanamaki easily receives. Oikawa sets to Hajime Iwaizumi who manages to get a spike by Aone and Futakuchi. Date Tech's libero, Kōsuke Sakunami, receives. Futakuchi gets the last hit but Yūtarō Kindaichi is able to get a one touch when he spikes. Oikawa sends the receive to Hanamaki who in turn sets for Oikawa.

Futakuchi and Aone jump to block and as Oikawa is aiming to spike in the opening to Aone's right, Koganegawa jumps in to assist in the block and is able to hit it back onto Aobajohsai's side. This surprises everyone. Koganegawa's momentum from running over causes him to bump into Aone who then knocks Futakuchi down. Koganegawa apologizes for his rushing in and Futakuchi tells him how to fix it but Aone takes the blame.

The next rally takes place and Koganegawa tries to do another setter dump but it is once again easily noticed and received, leading Seijoh to counter and score. Futakuchi scolds Koganegawa for being too obvious when trying a setter dump and informs him that he does not have to try a fake out every single time.

Oikawa serves next and lands a service ace. At his next serve, Futakuchi dives and receives the ball, unintentionally sending it back to Seijoh. As he watches the ball, Sakunami recalls when their coach, Takurō Oiwake, brought Koganegawa onto the team as the new setter; requesting that Sakunami help Koganegawa as he has no real in game experience. Sakunami determines that the best way he can help Koganegawa is for him to receive and to get the ball high enough for Koganegawa to do a jumping set.

As Koganegawa sets, he too recalls his coach's words of what to do on the jump set and is able to tap the ball just enough to where it hangs in the air just long enough for Aone to spike and score. The play impresses the Karasuno team while Oikawa and Iwaizumi see that Date Tech is using Koganegawa's height as a weapon.

Jingo Fukiage serves. Iwauzumi receives and Oikawa stuns everyone by doing a setter dump, bringing Seijoh to match point. Despite the tension, Futakuchi instructs the team to remain calm and to try to get a point back. When Hanamaki serves, Daichi and Asahi both notice that it looks as if Seijoh was been working on their serves.

Futakuchi calls for the last hit and it able to hit the ball against Iwaizumi and score. With the new rotation, Oikawa sees that Koganegawa is now in the front row. Moniwa feels certain that Date Tech will be able to block any oncoming attacks as Futakuchi is an ace who is great at blocking, Aone is the core of the iron wall and Koganegawa's height and build add to the walls stregnth; making this new iron wall the strongest there is in the prefecture.

Date Tech serves. Hanakamaki receives though the ball is sent up a bit short. Oikawa, in an attempt to throw off the blockers, sends the ball to Iwaizumi a bit further from the net. This does not go unnoticed by Iwauzumi and his spike is blocked by a one touch from Aone. As Koganegawa is sent the ball, he remembers what Futakuchi said about not needing to do a fake out at every attempt. He does a clear direct spike past Iwauzumi and Shinji Watari is not able to receive. The ball goes out as Hanamaki attempts to save it.

Before the next set begins, Iwauzumi tells Oikawa to keep playing as he always does and let him worry about Koganegawa. Oikawa agrees after seeing Iwauzumi's serious expression. Onagawa serves and Hanamaki receives. Iwaizumi spikes past Aone but Sakunami saves it. The ball heads over the net and Issei Matsukawa jumps to reach for it only for Koganegawa to beat him to it and set the ball to Aone.

Aone spikes but Watari receives. Oikawa sets to Iwaizumi. Koganegawa, Aone and Futakuchi position themselves for a triple block and jump as Iwaizumi is prepared to spike. Iwaizumi shouts at Koganegawa that he can't fake experience and shoots the ball right through the open space of Koganegawa's arms; thus winning the game for Aobajohsai. As the Seijoh team celebrates their victory, Koganegawa is visibly upset at his mistake.

Out in the hall, the retired third years meet up with the team. Kamasaki teases Koganegawa for still playing like a rookie and taunts Futakuchi for realizing how difficult it is to lead the team. Moniwa, Kamasaki and Sasaya encourage the team to continue growing and how they can be the best iron wall Date Tech has ever had.

Futakuchi takes this chance to invite the retired third years to practice with the team when they can in order to help Date Tech continue to improve. As the three excitedly agree, Koganegawa promises to them that he will improve and will one day be able to toss any kind of ball his team needs and he will block to where no player will be able to get through no matter how big or strong they are.

Aone informs Koganegawa that the player who is difficult to beat may not be big and strong. As he walks from the team, Aone passes Karasuno's first years though he does not stop to speak to Hinata. He silently promises that he will never forget what took place today and that he will stop Hinata the next time they face each other.

Later on as they are warming-up for their next game, the Karasuno players recall moments from the last time they faced Aobajohsai. Yachi sees how everyone is on edge. Kiyoko explains how they had gone against Aobajohsai before and even though they gave everything they had they were still defeated.

Tadashi approaches Yachi who quickly becomes stunned at his nervous expression. He asks if she has any antacids for his stomach as he is feeling nervous. Yachi attempts to help Tadashi and explains how he shouldn't hold his nervousness in. Instead he should let it out into words as it could help him relieve his worries. She eagerly listens as Tadashi goes on to explain how during the Interhigh Preliminaries, he had been subbed in for the first time as a pinch server during the Seijoh game. The game had been a close call and he feels that if he had been able to land his serve Karasuno may have won but instead the ball had hit the net and the point was lost.

Tadashi fears that the same thing may repeat itself during this game which is why he is so nervous. Yachi becomes incredibly horrified at hearing how Tadashi was given all that responsibility and feels like she is about to throw up. Tadashi becomes fearful at Yachi's reaction, believing he has 'killed' her, and several of the others rush over to question what is going on; though Kiyoko sees that Yachi simply had somehow transferred Tadashi's nervous energy onto herself.

While filing his fingernails, Kageyama is approached by Hinata who right away sees how nervous he is about facing Seijoh; specifically Oikawa. He tells Hinata how he remembers when Iwaizumi told Oikawa how a team of six is stronger than any one player. Although he thought that was an obvious statement when he first heard it, Kageyama now understands that Iwaizumi meant that when the team of six works together and unites their strengths they will be the stronger team. Kageyama also admits that Oikawa is better than he is at being able to bring out the strengths of any spiker he is playing with.

Hinata questions Kageyama if that's what he really believes and declares that they will need to be the exception to that. Daichi then gathers the team and together they head out to face Aobajohsai.

Retrieved from "https://haikyuu.fandom.com/wiki/The_Iron_Wall_Can_Be_Constructed_Any_Number_of_Times_(Episode)?oldid=75334"
Community content is available under CC-BY-SA unless otherwise noted.