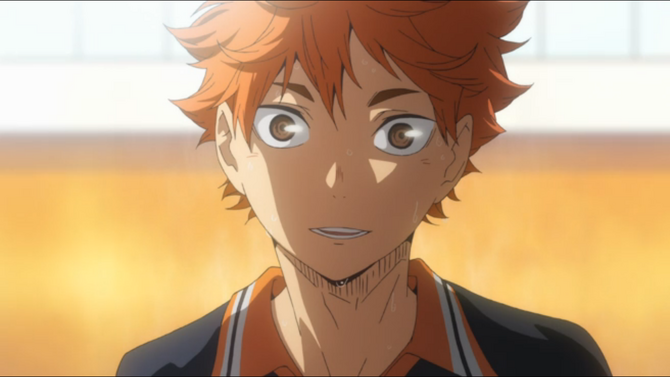 The Neko-Karasu Reunion (Japanese: ネコとカラスの, Neko to Karasu no Saikai) is the twelfth episode of the Haikyū!! series, written and illustrated by Haruichi Furudate and published in the manga magazine, Weekly Shōnen Jump. The episode premiered on June 22, 2014.

Nekoma and Karasuno begin their match with Kageyama and Hinata connecting on a quick attack that gives Karasuno the 1-0 lead. Nekoma realizes that they're up against a genius setter, so they decide to start marking Hinata. Hinata's blocker gets used to his speed, and starts to block his shots, allowing Nekoma to win the first set 25-22. However, Hinata isn't discouraged and continues trying. Suddenly, he figures out a way to change his spike path mid-air and realizes that he now has a new weapon to go along with his quick attack.

Five years ago, on May 5th, the former Coach Ukai and Coach Nekomata faced each other in a gym. Ukai promised that they would face off again in nationals, but Karasuno and Nekoma ended up getting eliminated in the Interhigh of that year. One year later, the two schools were able to attend nationals, but Karasuno was defeated in the third round. Nekoma made it as far as quarterfinals but in the end, they weren’t able to play an official match against each other. The coaches then retired and both teams slowly went into decline.

In the present, the current Nekoma and Karasuno teams finally meet. Hinata recognizes Kenma right away and asks him why he didn’t tell him who he was when they met earlier. Kenma avoids the question but before Hinata can question him more, Taketora appears behind the setter and intimidates Hinata. As Hinata’s backing away, Tanaka appears and defends Hinata from Taketora and questions if he wants to rumble. Sugawara quickly scolds him for fighting and calls him embarrassing. On the other side, Yaku bluntly tells Taketora off for always picking fights and saying that he's making a fool of himself. Humiliated by the comments, the two-second years stand off to the side while the two-third years apologize to each other.

Suddenly, Taketora yelps, noticing Kiyoko from behind Tanaka. He blushes heavily and runs away as Shibayama and Inuoka celebrate their winning of the bet. As Hinata watches this chaos, Kageyama asks him how he knows Kenma. Hinata explains their encounter and reveals that Kenma’s a setter, catching Kageyama’s interest.

The players then enter the gym. Daichi and Kuroo shake hands with fake smiles on their faces, both recognizing the other as a “shrewd type” of person. Also in the gym, Ukai and Naoi greet each other after 8 years, as well as Takeda thanking Coach Nekomata for coming over. As the players get ready, Daichi gives them a speech about how they’re still a fragmented team. He warns them about Nekoma and how little they know about the challenges it may pose to them. On the other side, Kuroo recites the team mantra, which Kenma feels embarrassed about and requests it not be said any more until the rest of the team say how it gets them in the right playing mood.

Before the practice match begins, Inuoka suddenly spots Hinata and points out his height, that the latter yells at him to not underestimate him. To his surprise, Inuoka smiles and says that he isn’t. Kageyama sends a glare their way, wishing that Inuoka would at least underestimate Hinata slightly. Kenma then calls out to Hinata and states that he said Nekoma’s a strong team, but it isn’t because of only him; it’s because of all the players together. However, Hinata doesn’t understand what he means.

Kenma serves first and Asahi receives the ball sloppily, which Nishinoya yells at him about. Kageyama and Hinata perform their quick before Nekoma even has a chance to react. The Nekoma team is in total shock at seeing how fast the attack had been and Nekomata questions how Hinata was able to do it with his eyes closed; causing Takeda and Ukai to grin in pleasure at seeing how their opponents were taken by surprise. Kenma compliments Hinata on the attack but is carefully and silently analyzing the quick and how to best counter.

Thrown off by Hinata’s spike, the Nekoma players being to focus more on him now; allowing other players to spike unguarded. Karasuno easily dominates, scoring point after point, and forces Nekomata to call a time-out. He explains that Karasuno’s players are strong but the one who stands out the most is the setter. However, Kageyama’s strong tosses only work with one person, Hinata. Kenma picks up on this and states that in order to stop Kageyama’s crazy quicks, they’ll just have to stop Hinata.

The match continues but Kageyama notices that Inuoka’s starting to touch Hinata’s spikes. Kageyama notices that the other players have focused completely on Hinata, showing that Nekoma’s target is the middle blocker instead of the ace when the Nekoma players lure Hinata into a trap by doing an area block to one side in order to get him to go to the opposite side and have Inuoka follow him. Kenma starts a toss and Hinata gets ready, assuming that it’s going to be a quick strike. However, Kenma tosses the ball over the net for a dump, surprising everyone. In the next rally, Kageyama retaliates with a straight spike, which unnerves Tanaka, Asahi and Sugawara as the first year seems to be talented at everything.

After Tsukishima scores with a feint, Kenma calmly analyzes the situation and notices that Tsukishima seems to be very observant and calculating as well. To prove this, Kenma glances in the opposite direction of his toss, tricking Tsukishima into moving the wrong away. Nekoma scores a point and Kageyama warily watches Kenma, realizing that the setter’s a huge threat.

In a flashback, Kenma reveals that he’d never made many friends because he doesn’t like interacting with people. Despite that, he’s always concerned about what people think of him. His only friend was Kuroo, who often dragged him outside to play volleyball. Kuroo talked him into joining their junior high’s volleyball team, which Kenma thought was kind of fun. Kenma continued volleyball at Nekoma when he entered high school but eventually wanted to quit because of the upperclassmen’s complete disrespect for the underclassmen. However, Kuroo talked him out of it, reminding Kenma of his strength.

Back in the present, Takeda notes that Kenma’s not that outstanding, especially compared to Kageyama, but he’s still strong. Ukai explains that Kenma’s good because of his teammates receiving skills. The ball easily goes back to him, giving him a good angle for a diverse range of attacks. In Karasuno, Kageyama holds up the team with his own skills while in Nekoma, Kenma’s supported by the entire team.

Nekoma soon reaches set point. Hinata asks Kageyama for a toss, confident that he’ll be able to score despite Kageyama warning him of how risky it will be now that Nekoma has reached set point. When Hinata goes for the attack, he opens his eyes and is shocked to see Inuoka had caught up to him and successfully stops the quick attack, winning the set for Nekoma.

Hinata isn’t discouraged, even as Inuoka continues to block him during the second set. Noticing Tsukishima’s unease, Ukai explains that he isn’t going to sub Hinata out yet because he wants to use this opportunity to find a solution but admits that he will take Hinata out of he looks to be giving up. Everyone expects Hinata to eventually tire out and lose his will to fight but they’re shocked when Hinata simply smiles in excitement. Hinata remarks that it’s different from the past, when he couldn’t do anything about the blockers. This time, he has Kageyama and he actually feels exhilarated competing with Inuoka.

The next toss, Hinata tries to spike with his eyes open but ends up missing. Ukai quickly calls a time-out and explains to Kageyama that he should try a softer toss with Hinata this time in order to give Hinata more freedom in the air to make an attack. The first few times fail and Hinata realizes that all this time, he had been relying solely on Kageyama bringing the ball to him. He doesn’t know what to do on his own and apologizes to his teammates for losing so many points. Tanaka and Asahi cheer him up and remind him that they can still regain those points. Daichi adds that Hinata’s alone when he jumps but everyone else will always be behind him.

Takeda notes that Hinata’s still having trouble and wonders what to do. Ukai recounts a story his grandfather told him about the Small Giant and how he built his style on getting around a blocker rather than past him. Just as he says this, Hinata finds a way to get the ball past Inuoka by changing the direction of the spike. It goes out but Hinata and Kageyama are determined to try again.

Retrieved from "https://haikyuu.fandom.com/wiki/The_Neko-Karasu_Reunion_(Episode)?oldid=95826"
Community content is available under CC-BY-SA unless otherwise noted.